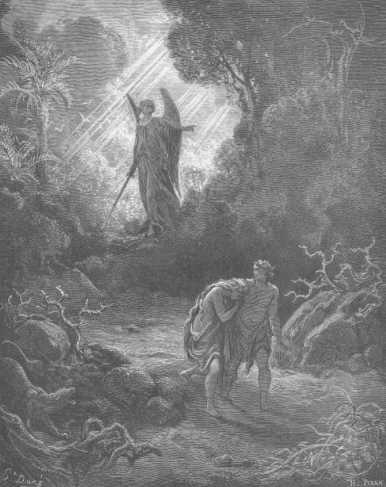 “Was God obligated to redeem mankind after the fall?”

That was the question Duncan Rankin, Covenant Theology Professor at BRITE University, asked us in class.

It is an interesting question and my first human nature impulse would be to say “no” because I am a puny human and God wouldn’t be obligated to me for anything. But let’s approach this from God’s point of view.

First of all, we know God is eternal. Therefore he is outside of time. And He is all-knowing and above all creation. John 1:3 says “Through Him all things were made; without Him nothing was made that has been made”. Psalm 139 is a beautiful picture of how God knows us PERSONALLY – “Your eyes saw my unformed body. All the days ordained for me were written in your book before one of them came to be”. That verse applies to all of humanity, including Adam and Eve. So He knew Adam and Eve would fall.

Then we turn to Revelation 13:8. In talking about those who do not know God, John (through the Holy Spirit) writes: “And all that dwell upon the earth shall worship him (Anti-Christ), whose names are not written in the book of life of the Lamb slain from the foundation of the world”. Acts 2:23 says “…Him, being delivered by the determinate counsel and foreknowledge of God, you have taken, and by wicked hands have crucified and slain…”. So we see that in eternity God the Father and God the Son had predetermined that the Son would become a man to die for our sins and redeem us to himself. God obligated Himself to do it.

But another, more important, question enters my mind. Why? Why would God redeem us? As Professor Rankin also pointed out, we as infinite creatures have offended an infinite God. We are all miserable sinners. If you even think for a split second that maybe you’re not as bad as you thought because you haven’t killed anyone or committed other physical sins, remember that Jesus condemned “thought” sin just as forcefully as he did physical sin. In Matthew 5:21-22 He compared anger to murder and said that if you are angry with someone you will be subject to judgment and hell-fire.

So there is a debt between the finite and the infinite that is too great for us to pay. “The wages of sin is death” – Romans 6:23. We stand condemned.

So why does God redeem us? Simply because he wants to. He desires to have fellowship with us, with you, with me. He loves us. The God who created the universe and the angels wants to spend time with us. Selah. But there is a problem – the debt is still there, sin hanging around our neck like an albatross. Our link to God is broken. Until the fall, God walked with Adam in the cool of the evening. But afterwards He could not, because a Holy and Righteous God cannot tolerate sin. In order to have that fellowship restored our sins would need to be forgiven and wiped clean. Only one person could/has done this. The God-Man Jesus Christ. To save us He added a human body/soul to his divine nature, came to live among us through the incarnation, lived a sinless life, died on the cross for our sins and was then raised from the dead in order to accomplish that restoration. “It is finished” Jesus cried on the cross. The work’s already been done. What amazing love!

So yes, God obligated Himself to save us because of his love for us.

And that free gift of salvation is available to all who believe in Him so that we can experience the words of the classic hymn:

“Amazing Grace, how sweet the sound, that saved a wretch like me. I was once lost but now am found, was blind but now I see!”

California: Secession From US 'Easier Than Catalonia'

President Trump is Proving He Is a Friend to Israel