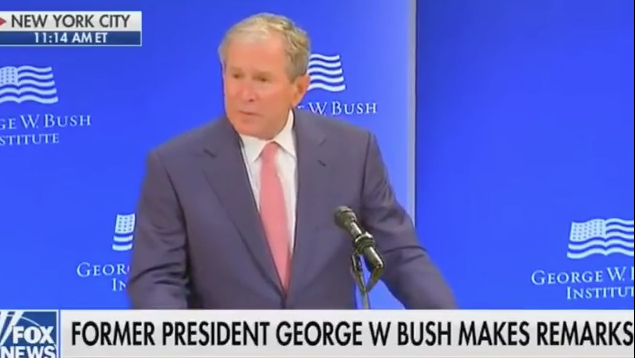 On October 19, former President George W. Bush delivered a speech on global liberty at the “Spirit of Liberty: At Home, In the world” event in New York. While most of the speech was good, Bush ventured into criticism of the current administration and it’s base that was out of character for him.

In speaking of the current climate in America he said,

“The American Dream of upward mobility seems out of reach for some who feel left behind in a changing economy. Discontent deepened and sharpened partisan conflicts. Bigotry seems emboldened. Our politics seems more vulnerable to conspiracy theories and outright fabrication.”

So unemployment = discontent = bigotry. That is a broad brush with which to paint the electorate who voted for Trump because of dissatisfaction with the economy. At least he didn’t use the word “deplorable”. And regarding conspiracy theories and fabrications, would that be the whole bogus Russian/Trump collusion or any of the other daily fake news headlines about Trump?

Bush also seems to have bought into the notion that the Russians hacked the 2016 election: “We must secure our electoral infrastructure and protect our electoral system from subversion.”

First of all, there is no proof that there was any hacking of voting machines or electoral influence by the Russians. This sounds like an attempt to undermine Trump’s victory last year. And it’s all the more astounding considering the aftermath of the 2000 Presidential election. Many on the left still consider the Bush presidency illegitimate and stolen from Al Gore. Has he forgotten that?

“We have seen the return of isolationist sentiments – forgetting that American security is directly threatened by the chaos and despair of distant places, where threats such as terrorism, infectious disease, criminal gangs and drug trafficking tend to emerge.” Isn’t Trump attempting to secure us from those exact things by destroying ISIS, building a border wall and the temporary ban? How is protecting our citizens from terror threats isolationist? I don’t get that statement from Bush at all.

“But we can’t wish globalization away, any more than we could wish away the agricultural revolution or the industrial revolution. One strength of free societies is their ability to adapt to economic and social disruptions.” No one is wishing globalization away. We’d just like international trade and policies to be a bit more equal so the American worker (or the economy) aren’t getting hurt so bad.

Finally, “We’ve seen nationalism distorted into nativism – forgotten the dynamism that immigration has always brought to America. We see a fading confidence in the value of free markets and international trade – forgetting that conflict, instability, and poverty follow in the wake of protectionism.”

This is just ridiculous. Wanting to enforce already existing laws to stop ILLEGAL immigration is not nativism. And considering that unemployment is down and the stock market is up, I’d say the confidence in the free market has increased since Trump took office.

Now, it is true that Bush did not mention Trump by name. But when has President Bush ever criticized his Democratic opponents? I don’t remember hearing a peep out of him during the eight years Obama was President. One of the most frustrating things during the Bush years was seeing the constant attacks on his character go unanswered. He was called a bigot, compared to Hitler (sound familiar?) and called “a miserable failure” by Dick Gephart 1,521 times (give or take a few hundred).

So for someone who has been in that job, and knows what kind of scurrilous attacks come with it, it is very sad to see President Bush engage in this kind of dialogue towards the person currently holding down the job. Liberty is not promoted by joining the media’s own “conspiracy theories and outright fabrications”.