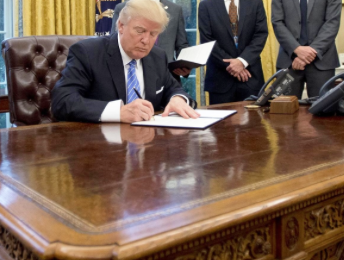 When the Affordable Care Act was first passed under President Obama – bringing with it a nightmare of official regulation on health care, as well as the unprecedented act of forcing private citizens under government orders to purchase health insurance – it was a hard fought victory for Democrats. They fought for it, they stood together, and though they had to make a myriad of legislative compromises, they got the bill to Obama’s desk for his signature. It wasn’t easy, but in the end, having said they were going to pass the law, they passed the law.

It has almost been a year of President Trump sitting behind the Resolute Desk, and even though we have had some ups and downs, it has been glorious watching liberals lose their minds on a daily basis. President Trump has been determined not only to get America back on track but also to end policies that have been harmful to our economy.

President Trump, completely fed-up by the Senate’s failure to repeal Obamacare, took his first unilateral steps to amend the struggling heath care system Thursday “struck a mighty blow” “the mighty President Trump, CEO of The United States realizes that “the pen is mightier than the sword“- Bulwer-Lytton” . The President’s mighty pen signing of this executive order will direct agencies to develop guidelines to increase health care competition and choice, with a goal of lowering prices and improving health care services. This may be the beginning of the end of Obamacare.

This will work and allow millions of people to get insurance across state lines at an inexpensive price. This move allowed President Trump, who promised to repeal Obamacare on the first day of his presidency, to show he is taking firm action after a year of frustration and failure in Congress to rescind the law.

Republicans seem to lack the kind of political fortitude and grit.  They certainly have the power. For the first time since before Obama was President, they control both houses of Congress and the White House, so it should have been a relatively simple (if not necessarily easy) matter to repeal the lamentable Obamacare law. But they’ve failed to do so – again, after several tries. Most recently, having floundered in their efforts to pass a meaningful drawback of Obamacare, they took a shot at getting a “skinny repeal” through their own little legislative Hell. They couldn’t even do that. Worse yet, it was a Republican – Senator John McCain, taking time away from his personal battle with potentially terminal cancer to return to Capitol Hill and weigh in on this fight – who cast the decisive vote to shut down the GOP’s campaign. Democrats, as usual, were united in their opposition; unity doesn’t seem to be a problem for them.

What is perhaps most galling of all is the fact that, in failing to undo Obamacare, the Republicans have revealed themselves to be a pack of showboating politicians, eager to score points with the base but spineless when it comes time to take real action. That’s because they’ve certainly been talking tough for the past seven years on Obamacare. In fact, they’ve done more than talk – but only technically. That’s because the Republican-controlled House has passed full repeals – yes, full repeals – of Obamacare on many, many occasions over the years, and seemed quite capable of getting over the disagreements and deadlock that plague them so critically now.

Of course, all of those tries occurred while Obama was still President, and it was a foregone conclusion that he would quickly veto any repeal of his signature legislation that was unfortunate enough to make it to his desk. But it looked great for the conservative base that Republicans love to court, and it allowed them to show “proof” of their sincerity when they spoke of the need to get rid of Obamacare. Too bad that once the White House went to Donald Trump, an actual conservative who isn’t a coward and is serious about turning back Obama’s tide, suddenly the Republicans love their nerve. Under Trump, not only are they unable to simply pass one of their many full repeal bills and submit it to the new President (who would sign it), they are so paralyzed that they can’t even figure out a “compromise” to scale back the law or replace it with something else.

So let’s not mince words, here. The Republican presence in the legislative branch of government is comprised of weak, disingenuous, politically trembling cowards. They say they want to get rid of Obamacare, but they only vote to do so when they know they can’t actually make it happen. After seven years, they haven’t even been able to come up with an idea they can all agree on. But then, if they did that, it might show some semblance of party unity. And apparently, party unity in modern American politics is exclusively reserved for Democrats.

Morgan Brittany: It's Time to Drain the Hollywood Swamp!