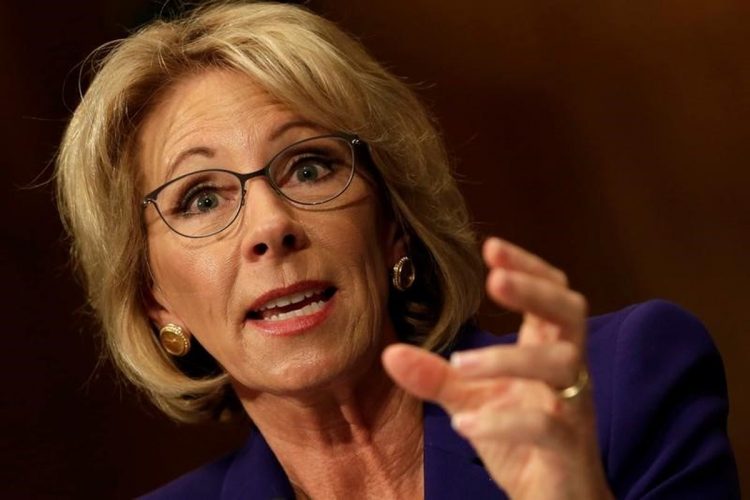 U.S. Education Secretary Betsy DeVos has returned Title IX to the due process protections of the 2001 Office of Civil Rights Guidance, which is a huge victory for all students, accused and alleged victims of sexual assaults, and puts the focus back on access to education, not punishment.

The September 22, 2017 Dear Colleague Letter from Candice Jackson, Acting Assistant Secretary for Civil Rights, requires colleges and universities to be more student-centered, and not allow institutional interests and sex stereotypes to interfere with objectivity and impartiality in Title IX investigations.

This move ends the an unjust process that was initiated in 2011 –when Obama’s Department of Education sent out a Dear Colleague Letter to all colleges, and began pressing them to more aggressively police sexual assaults, and also threatened to take away Title IX funding from schools that failed to do so.

During that time, Universities across the country radically changed the definition of sexual assault, created Kangaroo Courts on Campus, and substantially scaled back protections for students (a majority men) accused of it, which has ultimately led to job loss, humiliation, expulsion, and even suicide of men in college who were falsely accused and were stripped of their due process rights.

One tragic example is Thomas Klocke, a student at the University of Texas at Arlington who committed suicide  on June 2, 2016— just days after learning that he’d been disciplined for allegedly “harassing” a gay student. His family recently filed a lawsuit, laying out claims that — if proven true — should send chills down the spines of parents of male children.

At the University of Central Florida, another student also claimed she was raped. Law enforcement and UCF acted quickly to investigate. The allegations were horrendous, but they weren’t true.

Orlando Criminal Defense Attorney Lyle B. Mazin convinced police to drop the rape case against his client, a student at UCF, when he produced an exculpatory video of the alleged rape. However, the UCF Conduct Board charged forward with the accusations and still sought to expel the student in spite of the video tape.

However, it wasn’t just the accused who were getting a raw deal with the radical Obama era policy, it was also victims who were being marginalized by this unjust process.

So, it comes as no surprise that the country is backing Betsy Devos and the Department of Education’s recent move to end the Obama era campus kangaroo courts. In fact, a September 2017 Rasmussen poll found that 73% of American adults agree with Secretary of Education Betsy DeVos’s statement about replacing the OCR Dear Colleague Letter on sexual assault on college campuses. Only 6% disagree.  Four previous opinion surveys reveal Americans place far greater confidence in the criminal justice system than in campus committees to handle sexual assault allegations.

The immediate improvements students should see on campus are access to specific allegations and evidence from the outset, no more “gag orders” that prevent students from speaking to friends and families to prepare to defend themselves, and Title IX investigation reports may no longer be one-sided, but must include all evidence, including exculpatory evidence.  For the first time in six years, sexual misconduct cases may be resolved informally by mutual consent and, when issuing sanctions, schools must consider the impact of separating a student from her or his education, — no more one-size-fits-all expulsions.

PolitiChicks recently interviewed Attorney Michelle Owens –Owens is an expert in University Title IX cases, and is actively combatting university bias in these matters. She is also a spokespeson for S.A.V.E. ,writes editorials and is a regular on radio and TV discussing how campus zealots have biased the system which resulted in students due process rights being taken away.

Owens explained to PolitiChicks how the recent move by the Department of Education will help student on college campuses:

​”The recision of the 2011 Dear Colleague letter does several things​ for students. Now colleges can treat students accused of sexual misconduct individually, on a case by case basis; they will not be forced to follow a “one size fits all” formula in resolving the issue. Additionally, mediation is now an alternative to resolve disputes over stalking allegations and other sexual misconduct. Colleges and universities are now allowed to determine what level of proof they want to use, the preponderance of the evidence standard or the clear and convincing standard. A measure of due process has been returned to students on college campuses.”

Owens also explained why the Obama era policy was harmful for students:

She also described the immediate improvements students will see on campus:

“Students will immediately be able to present their case on their own terms; they will get to determine who their witnesses will be and what evidence will be presented. A higher standard of evidence can be used, meaning the trier of fact is 70% sure the victim is truthful instead of the lower 50% under the 2011 Dear Colleague letter.”
Owens also told PolitiChicks:
​”The criminal justice system offers 26 more due process protections for victims and accused students that are not available under the university system​. Felony rapes should be reported to the police so that real rapists are not left to seek out other victims but are put behind bars and the public is protected.”
For more information, contact S.A.V.E. (Stop Abusive and Violent Environments)
Share
Facebook Twitter Pinterest Reddit Share via Email Print

The Asymmetry of the Israel-Palestinian Conflict