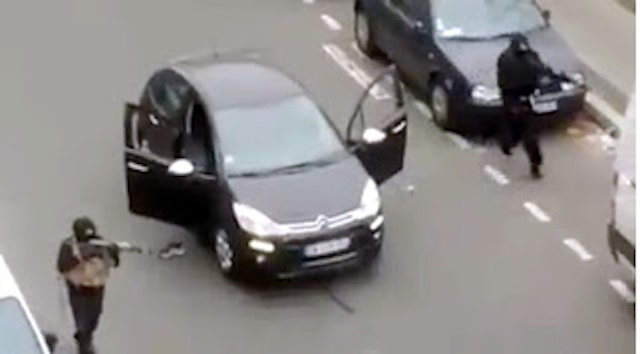 After Vegas, the gun control memes and myths come out. It doesn’t matter how wrong they are, they will echo in the mediasphere and then the talking points will leak into everyday conversations.

Last year, a Muslim terrorist with a truck killed 86 people and wounded another 458.

Mohamed Lahouaiej-Bouhlel, the Tunisian Muslim killer, had brought along a gun, but it proved largely ineffective. The deadliest weapon of the delivery driver was a truck. Mohammed, who was no genius, used it to kill more people than Stephen Paddock would with all his meticulous planning in Vegas.

Do we need truck control?

Deadlier than the truck is the jet plane. Nearly 3,000 people were killed on September 11 by terrorists with a plan and some box cutters. And then there are always the bombs.

The Boston Marathon bomber wounded 264, a suicide bomber at the Manchester Arena last year wounded 250 and the Oklahoma City Bombing (the only non-Islamic terror attack on the list) killed 168 and wounded 680. Paddock was also stockpiling explosive compounds. If he hadn’t been able to get his hands on firearms, he would have deployed bombs. And potentially killed even more people.

The mass killer who most ominously resembles Paddock was Francisco Gonzales: a Filipino with financial problems who shot the pilot and co-pilot on a gambler’s special flight from Reno. Back in Reno, Gonzales had told a casino worker that it wouldn’t matter how much he lost. The plane went down with everyone on board. Gonzales had a gun, but his actual murder weapon was a plane.

Guns are not uniquely lethal. We live in a world filled with extremely lethal objects from chemical compounds to big trucks. We can license and regulate some things. But we can’t regulate everything.

“This is the only country where this happens.”

That’s the leftist meme deployed after the Vegas shooting. But Paddock’s death toll narrowly edges out that of South Korea’s rampage killer Woo Bum-kon who murdered 56 people. America is not the only country where rampage killers operate. And their attacks have nothing to do with the racist construct of “white privilege”. It’s the leftist conviction that America is uniquely evil that accounts for the myth.

Seung-Hui Cho, one of this country’s worst rampage killers who murdered 32 people at Virginia Tech, was South Korean.

But the worst rampage killer in South Korea didn’t use a gun. He set a train on fire.

Guns aren’t uniquely lethal. Neither is America. Or South Korea. Or anywhere.

“A mass shooting happens in this country every few days.”

There’s no myth that is getting a bigger workout after the Vegas shootings than that of the ubiquitous mass shooter. The myth conflates drug violence in Chicago, which is nearly constant, with rampage killers like Stephen Paddock or Adam Lanza, who are far rarer, and Islamic terrorists like Omar Mateen.

Mass shootings and rampage killers are not the same thing.

And it’s the left that has crippled the laws meant to fight gangs and drug dealers. Obama initiated a drug dealer pardon amnesty even while calling for more gun control. But the only way to control gang violence is by cracking down on gangs, not on guns. The pro-crime left deems such measures a “school-to-prison pipeline” that’s little more than “modern slavery”. And so the gang violence goes on.

By conflating an Adam Lanza with a gang member shooting up a street corner in Chicago, the media hides what is really going on. Rampage killers are rare. Gang violence is commonplace. By making rampage killers into the face of gun violence, the left gets to blame its own policies on the NRA.

“If only we had gun control.”

Gun control works as well as any prohibitionist policy. It works as long as you follow the law. If you don’t follow the law, then getting the prohibited item is a matter of money and connections.

And it’s those people who shouldn’t have guns that are most likely to be able to get them.

The left will lecture on the failure of drug prohibition, but is sure that gun prohibition would work. Why? Because they usually have some personal experience buying drugs, but little experience buying guns. And so they’re sure that a ban that they would ridicule in any other area will somehow work with guns.

There’s always some country that’s a shining example of how gun control works.

The Europeans, who are progressive, suave and sophisticated, have no doubt figured out gun prohibition, along with socialized medicine. But just this April, a Muslim terrorist opened fire on the Champs-Élysées in Paris with an AK-47 rifle. He killed a police officer and wounded several others.

Two months later, another Islamic terrorist with an AK-47 rammed his car into a police van on the Champs-Elysees.

The Bataclan attackers and other members of their cell had no trouble getting their hands on Kalashnikovs either. The Charlie Hebdo attackers used an AK knockoff.

Muslim terrorists were able to repeatedly strike in France despite its gun control laws. And they used the weapons that the media refers to with ominous dread as “assault rifles”.

“We have so many weapons in Paris,” the spokesman for France’s police union had complained.

The French authorities seize some 1,200 “assault rifles” every year. Meanwhile in the capital of the European Union, you can get a “military weapon” for $500 in half an hour.

Legal firearms make it easier for people to defend themselves and for the authorities to track criminals. Criminalizing firearms just creates a massive black market in which anything goes.

The Charlie Hebdo terrorists brought a rocket-propelled grenade launcher to the party. That’s what happens when you let the black market take over. You don’t control guns. Instead you feed a black market and lose all control over the sorts of weapons being sold in your country.

After every attack, the clamor for “common sense” gun control begins by political hacks, talk show hosts and celebrities who don’t set foot outside their homes without an armed guard. None of these “common sense folks” seem to know the first thing about guns. And none of them care.

Gun control isn’t a policy. It’s a moral panic. Like prohibition, it’s a xenophobic reaction to a different culture that shares the same country with them. Guns have come to embody a rural conservative culture in the minds of urban leftists the way that alcohol once embodied foreign immigrants to prohibition activists and the way that drugs represented urban decadence to rural America.

It’s why the “common sense solution” talk quickly gives way to broad denunciations of a “national gun culture”, of “white privilege”, of rural folk “clinging to their bibles and guns”, of American militarism and toxic masculinity, and of all the things for which guns are merely a symbol to the leftists who hate them.

A cultural critique is very different than a common sense solution. It isn’t guns that the left wants to ban. It’s people. It was never really about banning guns. It was always about the culture war.

A Life-Long Fan's Perspective on the NFL