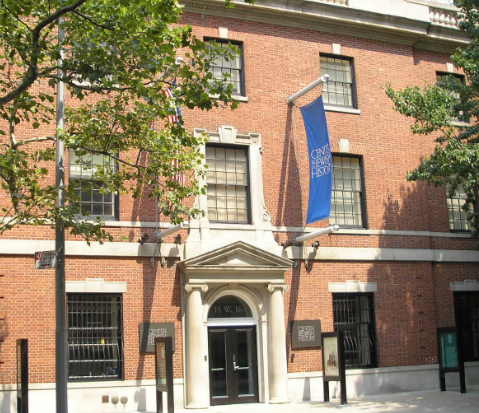 The Jewish community was shocked when it learned that David N. Myers, a militant anti-Israel activist, had been quietly put into place as the head of the Center for Jewish History.

There was even more shock at the unquestioning support that Myers received from establishment figures at the Center and its constituent organizations like the American Jewish Historical Society.

There is a very good reason for that.

David N. Myers did not end up in his position by accident. The defenses of his anti-Israel activism contend that we should ignore his political views because they have nothing to do with his position. But it’s because of these views that he got the job and because of them that he will keep the job.

Myers’ appointment was not the beginning of a problem at the Center for Jewish History. It’s just the most obvious symptom of a serious ongoing anti-Jewish crisis in Jewish Studies.

Let’s start with an organization misleadingly named Scholars for Israel and Palestine which came up during the Myers debate because some of its members had called for sanctions against Israeli government officials.

Scholars for Israel and Palestine’s founding members included veteran anti-Israel activists such as Peter Beinart, Eric Alterman and David Myers. But its list of members also includes many key figures at the Center for Jewish History and the American Jewish Historical Society.

The Myers appointment was an inside job.

The Center posted a statement of support for Myers from members of the academic councils of the Center for Jewish History and the American Jewish Historical Society.

The most notorious figure on the list is Hasia Diner. Unlike some opponents of Israel who fashionably claim to be liberal Zionists, Diner co-wrote an editorial viciously denouncing Zionism and Israel.

In a hatefilled rant, Hasia Diner wrote that she abhorred visiting Israel, that the Law of Return was racist and that though she abhorred “bombings and stabbings”, the murder of Jews is what “oppressed individuals resort to out of anger and frustration”.

“I feel a sense of repulsion when I enter a synagogue in front of which the congregation has planted a sign reading, ‘We Stand With Israel’”, Hasia Diner concluded her ugly rant.

Hasia Diner had also complained that “it is impossible to have a conversation about Israel or BDS because one is accused of being anti-Semitic.” She suggested that anti-Semitism is “profoundly overused” and is “an easy, convenient label used to end a conversation or analysis instead of exploring what is really going on.”

Hasia Diner is a member of the Academic Advisory Council of the Center for Jewish History. And is a founding member of SIP.

Beth Wenger is the Chair of the Academic Advisory Council of CJH. Wenger signed a petition in defense of BDS anti-Israel activists and has accused Israel of mistreating “Palestinians.”

Wenger is also another founding member of SIP.

Marion Kaplan, the third Jewish CJH Academic Advisory Council member to sign the pro-Myers letter, had also signed a letter calling on Obama to end aid to Israel over its campaign against Hamas.

The letter demanded a permanent end to the blockade on Hamas and the withdrawal of Israeli soldiers.

Kaplan had signed the “NYU Out of Occupied Palestine” divestment letter which called for boycotting, among others, companies that provide fences that protect Israeli families from being murdered.

After the Students for Justice in Palestine hate group harassed Jewish students at NYU, Marion Kaplan signed a letter in their defense. Kaplan had also signed the same pro-BDS activist petition as Wenger.

Like his other pro-Myers CJH Academic Advisory Council colleagues, Jeffrey Veidlinger had also signed the pro-BDS activist petition alongside Diner, Kaplan and Wenger.

And of course, David Myers.

The situation on the American Jewish Historical Society side is little better.

Deborah Dash Moore had signed a petition, alongside Peter Beinart, calling for a “targeted boycott” of “all goods and services” from ’67 Israel. And to penalize Jewish charities operating there. She had also co-signed an op-ed in defense of a Dartmouth dean who supported an academic boycott of Israel.

Lila Corwin-Berman is the chair of the Academic Council of the American Jewish Historical Society and serves on its board of trustees. She is also a member of the Open Hillel Academic Council.

Open Hillel is an “alternative” anti-Israel version of Hillel that rejects a ban on BDS activism.

Other CJH and AJHS members of the Open Hillel council include Hasia Diner, Marion Kaplan, and David N. Myers.

Also listed is Judith Butler, a BDS activist who described Hamas and Hezbollah as progressive organizations.

Lila Corwin-Berman fulminated against Jewish and Israeli efforts to combat BDS and warned of “efforts to conflate any boycott ideas with anti-Semitism.” It goes without saying that those most worried about such “conflation” are overt or covert boycott supporters.

She fumed that efforts to donate to the anti-Israel hate group IfNotNow through the Jewish Community Foundation of Los Angeles had been stymied. The issue became a cause célèbre for anti-Israel activists. It was in keeping with the agenda of IfNotNow which specializes in a Soft BDS campaign harassing Jewish charities to compel them to stop providing services and support for Jews in ’67 Israel.

Lila Corwin-Berman described the anti-Israel hate group as “progressive and outspoken”. When IfNotNow haters burst into an African-American church to scream about their hatred for the Jewish State, Pastor Dumisani Washington said, “I and my church members are having a hard time distinguishing between this harassment and the appalling racist harassment we have suffered previously in our lives.”

These are some of the figures with a great deal of power at the Center for Jewish History. And these are some of their views. CJH and some of its associated organizations have been hollowed out by a left-wing network. Some of its members openly support BDS. Others covertly aid BDS activists and supporters.

That is how David N. Myers, an anti-Israel activist unfit for any role in the Jewish community, ended up heading the Center for Jewish History. Myers is the tip of the iceberg. The radical activists appropriating and hijacking Jewish culture, thought and history to pursue an anti-Israel agenda are the iceberg.

The Center for Jewish History needs a thorough housecleaning. As does the American Jewish Historical Society. And it’s not alone. But anti-Israel activists won’t voluntarily clean themselves out.

And their media allies will defend them, lie for them and smear their critics every step of the way.

Jews and friends of the Jewish people however need to be able to distinguish between Jewish organizations and organizations with Jewish names that have been hijacked for anti-Jewish agendas.

That includes the Center for Jewish History, the American Jewish Historical Society and possibly its other constituent organizations. These include YIVO, the Leo Baeck Institute, the American Sephardi Federation and the Yeshiva University Museum. Also signing the Myers letter was Annie Polland, a leading figure in the Lower East Side Tenement Museum.

Donors would be well served by donating to Jewish causes instead of anti-Jewish ones.

But beyond that is the larger challenge of cleaning out and reclaiming Jewish Studies as a Jewish, rather than an anti-Jewish discipline. On many campuses today, such as Myers’ home base at UCLA, Jewish students are not only isolated by anti-Israel activism, but by the complicity of even Jewish Studies faculty. The Communists and Nazis didn’t simply seek to physically destroy the Jewish people, but to warp Jewish identity into a distorted anti-Jewish caricature to serve their ideological purposes.

Anti-Semitism isn’t only an external phenomenon, but an internal one. And so Jewishness has to constantly be reclaimed in an ongoing process of moral liberation from internalized anti-Semitism.

Resistance to anti-Semitism is not just an external struggle, but an internal one within the Jewish people.

Smart Move: Muslim Refugees Settling in Mexico Instead of U.S.