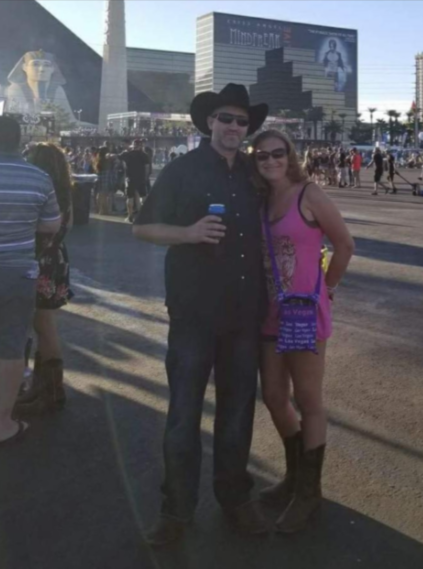 A resident of Menifee, California David Marsh was at the final night of the three-day Route 91 Harvest festival. Country singer Jason Aldean was on stage when Marsh his wife and 22,000 other music fans were fired upon.

Marsh shared his firsthand account of their experience. They found refuge in a nearby hotel and took the time to talk to the PolitiChicks.com shortly after the shootings.

Seconds before fired upon the couple was taking photos of their friends having a great time inside the concert venue.

“We heard what we thought were fire crackers, but then we knew it was machine gun fire. We ran for our lives. There were people down (shot) all around us but things were so crazy we just ran. Most scary night of my life,” said Marsh.

Marsh said the shooter was in a hotel firing down on the crowd.

“It sounded like a war zone,” said Marsh. “When we ran we ran through side streets, through hotel kitchens just to get away.”

“We were all really shaken up and in shock. Never thought something like this would happen to us or anyone here for that matter,” said Marsh.

People instantly took to social media to find out where their loved ones were or to let their family know they were safe. Casey Gavik from Southern California was at the concert and ran to the Luxor where the hotel was locked down.

Cyndi Mitchell also from Southern California said she ran two miles to get away. Mitchell wrote on social media that MGM and Caesars were evacuating people from the hotels.