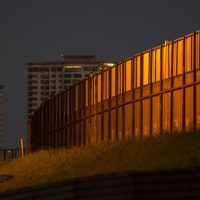 When he was running for president in the last campaign, Donald Trump made a number of clear promises regarding the policies he would implement should he win the race and take office. He said he would put America first, before other world powers (a novel idea for an American President, unfortunately). He said he would repeal and replace the travesty to our healthcare system called Obamacare. He said he would strengthen our military. Now that he has won, President Trump has tried to fulfill all of these promises, with his success often hindered by an uncooperative (yet ostensibly Republican) congress. But easily his most recognizable pledge, probably the greatest undertaking he agreed to pursue once he sat in the big chair, was the building of his “big, beautiful wall” along the nation’s southern border. And now more than ever before we need to get thus done.

Unfortunately, so far we are still waiting for this iconic wall to be completed – or even started. Essentially, as with some of the President’s other promises, this is because of a lack of will among the GOP led congress. Trump famously declared that his wall would be paid for by Mexico, but contrary to what some literalist liberals have tried to push, it was never intended that some manner of absurd invoice would be sent to that nation, to be paid by some even more absurd check. Mexico will pay in other ways, over time, but the actual construction of the wall will require cash appropriations by congress.

Legislators have been dragging their feet, but we are beginning to see some progress, at least. The House Homeland Security Committee is now ready to introduce the Border Security for America Act, authorizing $10 billion for various border security measures. Admittedly, these would not be limited to construction of the wall – though that is included as well – but the other areas covered are equally important, such as shoring up existing fencing along the border, deploying new defense technologies, and utilizing aerial surveillance devices such as drones. An additional $5 billion would go towards the hiring of 10,000 new border patrol agents and officers, while giving the National Guard an expanded role in securing the border.

The problem is getting this bill through, a highly uncertain task. So far, we cannot even be certain that it will be brought to the floor, with the likes of feckless Republicans such as Speaker Paul Ryan and Mitch McConnell hemming and hawing over it. Why a Republican congress, elected to a majority in the same year as a conservative President who ran on a strong border security platform, would behave this way on the critical election issue that got them into power, is hardly clear. But it certainly isn’t anything new; the President has had anything but an easy time getting cooperation from his own party in passing the agenda he promised and the American people asked him to deliver. Of course, it goes without saying that Democrats are quite united in their opposition, to Trump’s border wall and just about everything else he tries to accomplish.

House Republicans need to get their act together. They were not asked to take majority power in congress so they could sit around and preen without doing any actual work. America is tired of the failed policies of previous administrations. President Donald Trump has a clear, strong vision for securing our borders and making this country safe – and great – again, but he can’t make that vision into reality without the support of his supposed political allies in the legislature. It’s time for the GOP to roll up their sleeves and do what they were elected to do; otherwise, we will just have to kick them out and bring in someone who will!