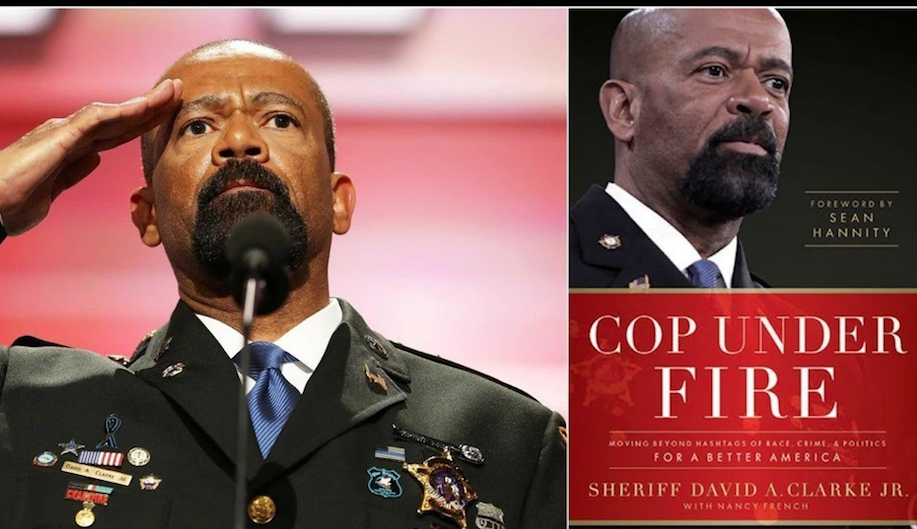 In his new book, “Cop Under Fire”, Sheriff David Clarke Jr. presents a blunt assessment of the issues that are facing us as a society. It is a refreshingly non-PC book that exposes many of the fake media’s lies. And Sheriff Clarke can talk with authority on these subjects because he has lived them.

Sheriff Clarke states that “This book is my effort to exercise my First Amendment right to free speech. No matter how many hate-filled, racist em-mails I receive, I will never shut up. I want my fellow black brothers and sisters to start thinking for themselves, to break free from the shackles that white liberals have placed on them.”

Some of the issues he covers in this book are:

supporting each other as extended families and ‘villages’ that collectively care for one another,

and especially ‘our’ children to the degree that mothers, parents and children are comfortable.

Note that they don’t mention ‘fathers’ in that utopian village. Only ‘mothers’ and ‘parents’ exist in

“In 1850, Frederick Douglass was asked what was the best response to the Fugitive Slave Act

which harshly penalized anyone for interfering in the capture and return of runaway slaves.

“Even Gandhi, on whose principles King based his philosophies, believed in self-defense:’I do

As he closes his book, Sheriff Clark states “Someone needs to stand up and push back against this false narrative about the American police officer. I don’t speak for every officer, but after thirty-eight years, I can and will speak for this profession. That’s my mission right now, and I won’t stop until this subversive, anarchist, hateful movement dies the ideological death it deserves. Police officers have the overwhelming support of the communities. Changing us into something we’re not will get cops and civilians killed.

Stand with me. I’ll do the heavy lifting. I’m a fighter. I’ll fight to the death if I have to. It’s the only way I know.”

A man deeply rooted in his Christian faith and love of country, Sheriff David Clarke is a true modern day patriot (and cowboy) fighting for truth and justice.

Yes, There WERE Russian Ties to Election Via Hillary and DNC