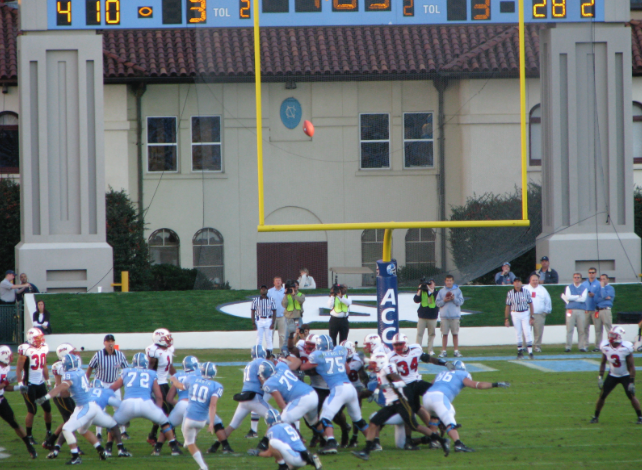 One of the biggest complaints about a college education is of course the cost. Today’s college graduates can rack up a pretty hefty tab in their quest for a degree. One of the biggest sources of income for any big name university is its athletic programs. College football and Men’s basketball are for the most part industries that generate millions of dollars. The success of those programs also determines how large the donations from alumni will be. The student athletes, upon whose shoulders the win/loss column rest are just that, students who happen to also be athletes. Sometimes however, that equation gets turned upside down.

Most schools have the same universal rule. If you don’t make the grades, you don’t play sports. After all, getting an education is why you are there right? Well, not all the time. We have all heard stories about star athletes getting kicked off the team because their grades were, shall we say, less than stellar. We have also heard stories of those same athletes being involved in things like having others do homework, and taking tests for them, all in an effort to make sure that Johnny Quarterback can stay on the team.

Recently, the NCAA issued a ruling on a case involving the athletic department at the University of North Carolina-Chapel Hill. For over a roughly 20 year period, a former department chair and his assistant created fake courses. As a huge fan of UNC basketball, the department chair wanted to make sure that basketball players were making grades. The NCAA ruling stated that no athletic-academic fraud could be proven that was exclusive to athletes because it was determined that other students could also benefit from these “on paper classes”.

But let’s back up for a moment and meet Jay Smith. Professor Smith is by trade a professor of European History. Usually, the French Revolution and other such topics do not draw protests on campus and the ire of p.c. soldiers, so Professor Smith has been left alone to teach his class. Last fall, Smith developed another class that dealt with the industry of big time collegiate sports and how that industry treats the athletes. The class includes discussion of this scandal and a subsequent attempt to cover up the fake classes and the reason for their existence. Smith had coauthored a book in 2015 that talked about this which would serve as the textbook used to teach the class.

As Smith moved up the academic food chain for approval to put the class on the 2016 summer and fall curriculum, all who needed to be seemed to be on board. But suddenly, the UNC administration was paying a lot of attention to Jay Smith, and they appeared to be very nervous about the class. Meetings were scheduled with several higher ups including the Dean of the College of Arts and Sciences, who tried to pass off the cancellation of the class as merely a “scheduling issue”, and not what it clearly was, a violation of Smith’s academic freedom. This would be the same guy who had in the past, no problems with cutting here and there whenever Athletics department needs arose. In the end, administrators threw the department chair under the bus and blamed him for the cancellation of the class.

The obvious question is, is UNC so figety about any possible fraud, athletic, academic, or otherwise that they would shut down the teaching of what was by all accounts a fairly popular class? And is the figety-ness because of any fear of damage, a.k.a. loss of revenue, to a basketball program that has produced the likes of Michael Jordan and many others? It looks dangerously close to Jay Smith’s freedom of speech merely being looked at as some sort of collateral damage. And what about any academic benefit for athletes who may not advance to the NBA, which is most of them and will be forced to get an actual education, and with any luck an actual job?

Professor Smith’s class on collegiate sports is proving to be revealing for the students who sign up for it, and rightly so. Students have the right to know what the departments who make up the university they are paying large amounts money to attend are doing with that money. They also have the right to know if the freedom of speech of their teachers is being violated.

As of this writing, “History 383-Big-Time College Sports, and the Rights of Athletes, 1956 to the Present”, will be taught during the Spring 2018 semester at UNC. Smith also filed and won a grievance against university administrators for violating his academic freedom.

Because of the industry-like nature of collegiate sports, these practices will not likely end any time soon. What has gotten lost in all of this is that these athletes are students first. Is the prestige of any college athletic program more important than educating students? Will the free speech of everyone, students and faculty alike continue to be threatened on campuses all over the nation? It is not how well you play the game, but whether or not you can read the scoreboard, and if you can’t, who gets to talk about it.