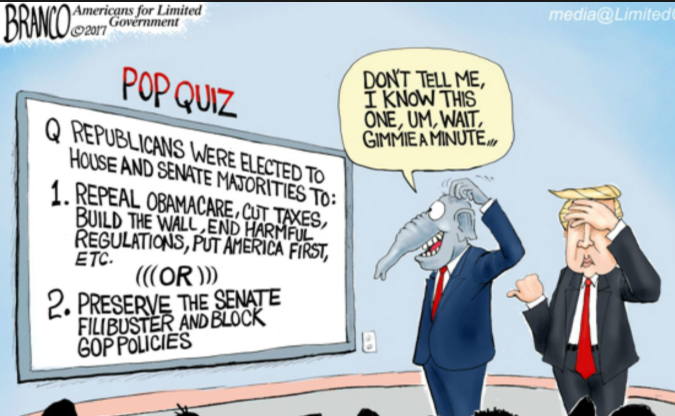 Republicans are confronting a growing revolt from their top donors, who are cutting off the party in protest over its inability to get anything done.

Tensions reached a boiling point at a recent dinner at the home of Los Angeles billionaire Robert Day. In full view of around two dozen guests, Thomas Wachtell, a retired oil and gas investor and party contributor, delivered an urgent message to the night’s headliner, Senate Majority Leader Mitch McConnell: Just do something.

Wachtell, who has given tens of thousands of dollars over the years to Senate Republicans, recalled that McConnell responded defensively. Passing legislation takes time, the Republican leader responded, and President Donald Trump didn’t seem to understand how long it required.

“Anybody who was there knew that I was not happy. And I don’t think anybody was happy. How could you be?” said Wachtell, who has previously given over $2,000 to McConnell but recently stopped donating to Senate GOP causes. “You’re never going to get a more sympathetic Republican than I am. But I’m sick and tired of nothing happening.”

With the GOP’s agenda at a virtual standstill on Capitol Hill, the party is contending with a hard reality. Some of the party’s most elite and influential donors, who spent the past eight years plowing cash into the party’s coffers in hopes of accomplishing a sweeping conservative agenda and undoing Barack Obama’s legislative accomplishments, are closing their wallets.

The backlash is threatening to deprive Republicans of resources just as they’re gearing up for the 2018 midterms. Party officials are so alarmed that North Carolina Sen. Thom Tillis, who oversees fundraising for the National Republican Senatorial Committee, told his colleagues at a recent conference meeting that donations had fallen off a cliff after the Obamacare flop. The committee’s haul plummeted to just $2 million in July and August, less than half of what it raised in June.

“When you’re in a business and you tell your stakeholders you’re going to build a building or something, you have to follow through,” said Houston-based energy executive Dan Eberhart. “I can’t borrow money to build a building and then not follow through, which is what these guys are doing.” He said he’s spoken to four Republican senators over the past month to express his displeasure, mostly over the party’s failure to repeal Obamacare.

Catalonia: A Reminder Why Our 2nd Amendment is So Vital