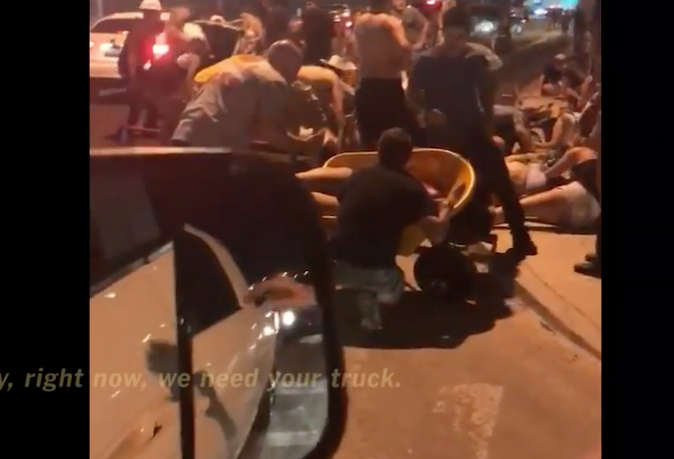 Israel has a love for everything American. We enjoy your movies, TV series, fast food, country music, New York, Los Angeles, Florida, and your wide open spaces We even enjoy your innocence when it comes to your domestic freedoms.

For Israelis, it has become a part of everyday life to walk through body scanners several times a day. For us, this isn’t confined to an airport experience. They are all over the place. You can’t go to a shopping mall, entertainment center, train station, bank, sporting event, supermarket, without having yourself and your bag searched. It doesn’t upset us. We know that it keeps us safe. It’s become an essential part of our daily routine. So we envy the open freedom of America that doesn’t need all this. Until Las Vegas. Then things changed.

Israel introduced strictures on our way of life as an absolute necessity following decades of horribly lethal forms of Palestinian terror. They were the harbingers of plane hijackings. That’s why we all go to airports three hours ahead of our flights They initiated bombing and suicide attacks that now plague civil society everywhere.

As we took steps to counter these threats, the inventive Palestinians resorted to vehicular terror and knifing attacks. These also have been copied by other deadly terror groups in our increasingly violent world. This has forced us to become even more vigilant. We have sensible gun control. Any sane person can own a handgun but not an arsenal of automatic weapons that can support a militia. In fact, sane and trained armed civilians have saved the lives of many hundreds of people at the hands of terrorists on the streets of Israel.

In Israel, civil society has reacted with understanding and support to the once sacred invasion of our freedom of movement and privacy. Simply put, it keeps us alive.

When I travel abroad, I see how open, how vulnerable, the population of Western societies are to attack. Israelis have developed an instinct in seeing the security weaknesses of other countries. Holding a huge open-air concert under the windows of a tall hotel is one. Unchecked access to and from transport systems is another. These are soft targets for massive terror attacks. An attitude that it will never happen is not good enough in today’s age of homegrown terrorists and unhinged individuals.

So far, in America, the lessons have yet to be learned even after a growing number of local terror incidents and the senseless mass shootings by deranged people at schools, churches, malls, and now from a hotel window.

You don’t have to fathom the reasoning behand a madman’s outrage in Las Vega. You have to figure out how to protect your citizens at concerts, sporting and public events, schools, shopping malls, transport systems. You have to figure it out now, before the next horrific bloodbath occurs.

In Las Vegas, America lost its security virginity. For most Americans. it was a wake-up call. It’s time to open your eyes and get real. It doesn’t matter whether it comes from a terrorist or from a lunatic, steps must be taken, and taken now.

Not in Texas! Two Teens Thrown Off Team During Game for Taking Knee During Anthem