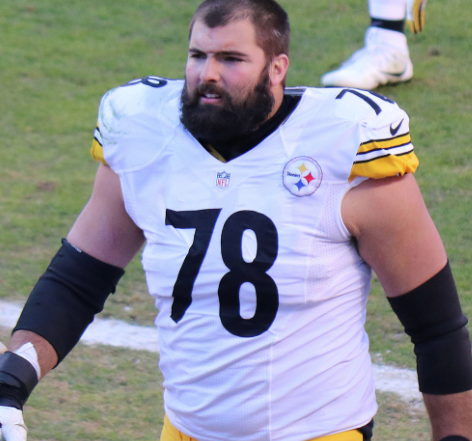 The events surrounding the national anthem protests has been a hot topic of discussion for over a year now. I’ve spoken about what I think of the protests recently on my podcast TrendChat (listen here). Since Colin Kaepernick dropped to a knee last year, it has ultimately resulted in President Trump’s recent harsh comments at a rally in Alabama, a response this past weekend from the entire NFL, as well as other professional athletes and anti-Trump celebrities.

And then there was Alejandro Villanueva.

On Sunday, September 24th, in the midst of all these anthem protests, the Pittsburgh Steelers announce that they will not come on the field during the national anthem. When news spread everyone took their sides but when it came time for the national anthem not all of the Pittsburgh Steelers were in the tunnel. The cameras zoomed their focus on one player standing alone. That player was the Left Tackle #78 Alejandro Villanueva. The image of this one man standing alone went viral in a matter of seconds and turned a relatively unknown football player into the next coming of George Washington. Jersey sales of Villanueva’s #78 jersey skyrocketed to number one. He was getting lauded up and down social media for his courageous stance. I would guess his agent was getting calls for interviews, speaking engagements, awards, parades maybe even a statue somewhere. All of this in a span of 24 hours without any context about the man himself–and then he spoke.

During a press conference the following Monday, Villanueva explained his actions, saying he felt embarrassed of the viral image of him standing alone and apologized for making his team look bad.

As fast as he was placed on a pedestal, he was knocked down.

If you’re doing what you believe is right, that should supersede any sports team or any political party. But this is not the first time we’ve seen a situation where many made a knee-jerk reaction to praise someone only to be disappointed shortly thereafter–and it almost always has something to do with wanting validation from the “cool kids”.

Whether it’s the whiz kid, the celebrity, or the sports figure who may say or do something remotely conservative, these people get pounced upon and hailed as the next great conservative superstar. This happens with Christian celebrities, too; whenever someone of any influence says something nice about Christians they are thrusted on the pulpit the next Sunday saying, “Look, look we got a millennial!” or “Look, look we’ve got a celebrity! Now will you like us?!”

In the case of Alejandro Villanueva, the vast majority of people didn’t even know he existed before he stood out on that field, but it was a perfect example of projecting what we wanted to believe about him based on no context, other than knowing he was an Army Ranger who served three tours in Afghanistan. So when he renounced our assessment, conservatives were once again left looking like Charlie Brown after Lucy has once again taken away the football.

Our principles need no validation from any ‘celebrity’. This country will still be great even if every professional athlete and/or Hollywood celebrity takes a knee. And if every person of prominence never said another nice word about Christianity, John 14:6 still remains true: that Jesus Christ is the Way, the Truth and the Life.

I know we live in a age of instant gratification, but we would serve ourselves well to take some time and examine before going all out with your support with people who may or may not deserve it. It would save a lot of disappointment and time from deleting all those posts on social media, or trying to get your money back from that jersey you just bought.

Dropping Testosterone and Rising Islam in the West

Dem Congressman Says "Impeachment Does Not Require a Crime" (?!)