Just as so many others right now, my heart, thoughts, and especially prayers go out to the people of the great 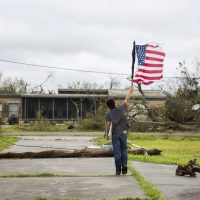 state of Texas as they struggle with the horrific impact of Hurricane Harvey.

The disaster has been immense, and because the storm has situated itself with some of its bulk still over water even as it strikes land, it is not actually over yet as of the time I write this. Massive flooding has imperiled the people of Houston, with many stranded on their roofs and rescuers needing boats to get them to safety.

Nature has even added a cruel twist, as fire ants – their nests flooded out by the storm – have taken to surviving by clinging together and floating on the surface of the waters in great red stinging islands. This may sound like a mere annoyance in comparison to everything else these people are going through, but the ant patches actually pose a very real danger of severe injury to any human or animal who inadvertently touches them. Those allergic to fire ant stings could even be killed.

Compounding the disaster itself in many ways has been the local government’s response to it. The Mayor of Houston, one of the worst hit cities in the state, had made a conscious decision not to order an evacuation because he didn’t think the impact would be so bad. The horrific images like that of a Houston nursing home, a child sitting on a kitchen counter clinging to his monkey, moms and dads clutching toddlers, holding tight their children as they wade through waist deep water. The badly flooded homes that elderly people were forced to wade or sit in their wheel chairs indoors in waist deep water. It took a Twitter post about their plight going viral before they were considered a high priority by first responder’s, who eventually rescued them. And lets not forget

Hurricane Harvey heroes rescue animals, there are people risking their lives to save animals from the floods of Hurricane Harvey.  Across  ravaged Texas, pet owners, neighbors and good Samaritans are doing what they can to rescue our four-legged friends. But it’s not just pets that need help. Ranchers have had to drive their cattle  and horses to higher ground. They are looking at a dire situation, not just for people but for pets and even wildlife.

But it’s times like these, when the local government- sometimes fails and the American spirit truly soars – this state has no shortage of American spirit and courage. There have been inspiring stories out of Rockport, Houston, and all over Texas of people, feeling weary and hopeless after seeing their homes and businesses leveled, nevertheless digging up their American flags and laying the Stars and Stripes over the remnants of what was once their lives. Some of them say it feels appropriate because their homes now look like they’ve been through a war, a battle of wills – and the people of Texas are determined to win. That is what makes it doubly fitting, because Old Glory is no stranger to the horrors of war, and it has a funny way of pulling through victorious.

And that victory has already begun. As indicated by the nursing home incident – which was ultimately resolved on Twitter – many people in need of help have been making desperate pleas over social media, their calls to 911 and other emergency services often meeting busy signals. Official first responders have been doing what they can, but what really brings tears to my eyes are the reports that have come down of ordinary people, private citizens, neighbor helping neighbor who happen to own boats and have fearlessly taken to the flooded streets in answer to these online appeals for help, rescuing their fellow Americans in these hours of greatest need.

It’s that kind of indomitable grit and tenacity – that impels us to risk our own safety looking out for our neighbors – that reassures me that this hurricane doesn’t stand a chance. It may endure for a while, leaving terror and destruction in its wake. But then it will fade away, consigned to the annals of history. And from there it can only watch as the American spirit lives on, embodied by the people coming together to make it through this disaster and come out not just alive, but stronger. “The message emerging from Houston and the Texas coast is not one of chaos and destruction, but of collective strength” and the character of the people of this state. “Mother Nature has certainly knocked the good people of Texas off their feet – but they will never be on their knees”. And in the end, all this terrible storm will have accomplished is to remind ordinary Americans of who and what they are, because it is together that they will inevitably overcome this challenge.

The March of Today's Alt-Left Activists