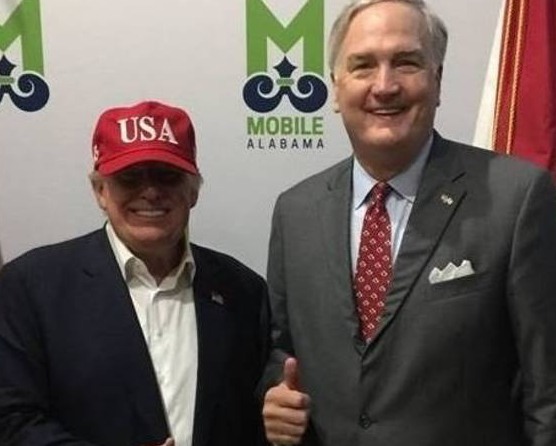 On Thursday a rally was held in Alabama for Chief Justice Roy Moore.  Despite the endorsement of the two speakers, Sarah Palin and Sebastian Gorka, it seems President Trump is continuing his support for Moore’s opponent, Senator Luther Strange.  An insider favorite of Mitch McConnell, Strange is known for being a ‘DC insider’.

President Trump is set to campaign Friday alongside Sen. Luther Strange, putting his own electoral winning streak on the line in next week’s GOP primary runoff in Alabama.

But the race has divided the Trump world, with a number of the president’s biggest fans backing Mr. Strange’s opponent, former state Chief Justice Roy Moore, a hero to religious conservatives.

Mr. Trump endorsed Mr. Strange’s bid months ago, but the visit marks the first time the president will campaign in person with the embattled incumbent, who also is expected to campaign with Vice President Mike Pence on Monday.

And in the closing days of the race, Mr. Strange is trying to make the most of the support, repeatedly reminding voters in a “Lincoln-Douglas” style debate with Mr. Moore in Montgomery on Thursday of the close bond he has developed with the president.

“The president had a choice and he picked me,” Mr. Strange said.

Mr. Moore said that Mr. Strange was handpicked by Senate Majority Leader Mitch McConnell, Kentucky Republican and the Washington GOP establishment, who “do not support [Mr. Trump‘s] agenda, who will not support his agenda in the future.”

Mr. Moore also questioned Mr. Strange’s character, and accused his rival of personally profiting off the immigration system and caving on the issue of same-sex marriage. He also suggested that Mr. Moore, in his role as state attorney general, went easy on former Gov. Robert Bentley, who resigned amid a sex scandal, in exchange for getting appointed to the seat in February.

“Crime, corruption, immorality, abortion, sodomy, sexual perversion sweep our land,” Mr. Moore said. “When we become one nation under God again, when liberty and justice for all reigns across our land, we will be truly good again, and then we will be straight.”

Mr. Strange, meanwhile, said Mr. Moore has shown he is “clueless” on issues like immigration, and said Mr. Trump backs him because of his track record opposing illegal immigration, bolstering job creation and defending religious liberty.

“I am all-in with the president,” he said.

The winner will face Democrat Doug Jones, a former U.S. attorney, in the Dec. 12 general election, and most political observers predict the winner of the GOP nomination will capture Attorney General Jeff Session’s old seat.

Mr. Moore gained a national reputation by defending the display of the Ten Commandments in an Alabama courthouse. He’s attracted the support of some of Mr. Trump’s top political allies and former advisers — including ex-chief strategist Steve Bannon.

On Thursday, former Alaska Gov. Sarah Palin, an early Trump supporter in the 2016 presidential primary, and Sebastian Gorka, a former deputy assistant to the president, visited Alabama to headline a pro-Moore rally.

Mr. Moore on Thursday also received an endorsement from the Americans for Legal Immigration Political Action Committee, which said he is the most reliable anti-amnesty candidate in the race.
The same group endorsed Mr. Trump early on in the 2016 presidential, but later rescinded its endorsement after accusing the president of not following through on the campaign promises he made on immigration.

Mr. Strange, meanwhile, has received strong support from Mr. McConnell and outside groups aligned with the Kentucky Republican that have invested millions in the Alabama race — much of it on anti-Moore attack ads.

Still, Mr. Moore is running 6 percentage points ahead of Mr. Strange, according to the Real Clear Politics average of polls.

Gorka to Conservatives: "Relax..We Are In This for the Long Game"