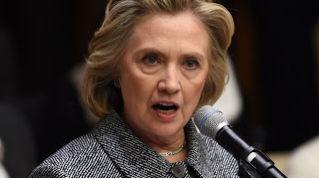 It’s been ten months since the 2016 election and it looks like Hillary Clinton is still playing the blame game.

In her soon-to-be released campaign memoir, she now targets former Democratic presidential rival Bernie Sanders, accusing him of “paving the way” for the relentless “Crooked Hillary” attacks she endured from Donald Trump in the general election.

In the memoir, Clinton accuses Sanders of resorting to “innuendo and impugning my character” during the contentious primary because the Democratic socialist “couldn’t make” a policy argument against her.

She adds:“Nonetheless, his attacks caused lasting damage, making it harder to unify progressives in the general election and paving the way for Trump’s ‘Crooked Hillary’campaign.”

Poor Mrs. Clinton. She still can’t figure out that it was HER that cost her the 2016 election, not Bernie or anybody else for that matter.

Her book, “What Happened” –is set for release on Sept. 12th.