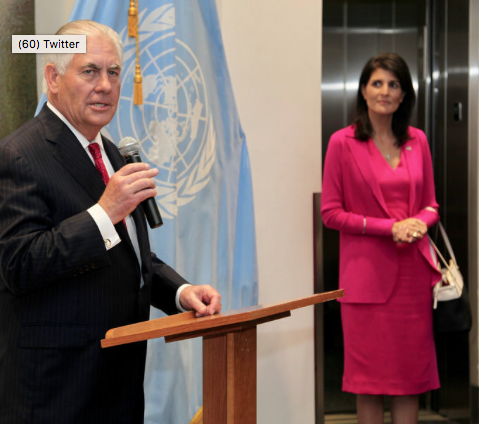 Rex Tillerson and Nikki Haley are squaring off over the Iranian nuclear deal, with the secretary of state pushing President Donald Trump to remain in the accord while the U.N. ambassador fights for the president’s agenda, The Washington Free Beacon reported.

The president ran on a platform of ending what he calls the worst deal ever made, and earlier this week said it was an “embarrassment.”

Yet, Tillerson is urging Trump to keep the U.S. in the deal, stoking tensions with Haley.

“The tension between Rex and Nikki is the worst kept secret in the State Department,” a foreign policy source told the Free Beacon.

Haley “thinks that [Tillerson is] trying to undermine the president and preserve [former President Barack] Obama’s Iran legacy, which is true,” the source told the Free Beacon. “He thinks she’s running her own foreign policy and auditioning for his job, which is also true.”

Tillerson is on the side of the international community urging Trump to stay in the accord; the restrictions on Iran, such as they are, are better than leaving them unchecked.

Haley is on the side of the president and, ostensibly, conservatives in Congress who opposed Obama inking the pact in the first place.

Haley on Wednesday said it will be Trump’s “decision alone” while chastising Iran for not holding up its end of the bargain.

Iran has “to stop smuggling arms, stop all the meddling they’re doing in the Middle East, their support of terrorism,” Haley said.

Gorka to Conservatives: "Relax..We Are In This for the Long Game"