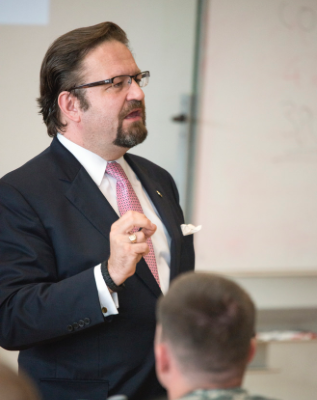 Former White House deputy assistant Sebastian Gorka has a simple message for President Trump’s supporters who are troubled by the president’s early performance in office: “Relax.”

In one of his first speeches since being eased out of the White House last month, the feisty, outspoken Mr. Gorka said it will take time to undo the work done by Mr. Trump’s predecessors, including reining in what he called a “permanent state” of more than 2 million federal employees hostile to the president’s every move.

“I must make a plea to all those people who came up to me last night and have done so since I left three weeks ago: relax,” Mr. Gorka said Tuesday at the Marriott Marquis in downtown Washington. “Take a deep breath and count to 10. The fat lady isn’t singing, OK? I know that’s not politically correct, but who cares? We are in this for the long game.”

“It’s not about the first eight months, but about eight years, and then another eight years under President Pence,” he added, referring to Vice President Mike Pence.

During his speech, titled “Principles of an America-First Foreign Policy,” Mr. Gorka elaborated on his vision of a foreign policy that is neither interventionist nor isolationist, but places the national interest above all other considerations. By coincidence, the address came on the same day Mr. Gorka’s former boss was defending his global vision in his maiden address to the United Nations General Assembly gathering in New York.

The Obama administration’s approach of “strategic patience” and “leading from behind,” Mr. Gorka argued, “created a Dantean inferno across the globe, which we inherited.”

“We understand it’s not about reckless application of force, but use of force when it is needed,” he said, “but only in the national interest of the United States. That’s what ‘America first’ means.”

He also weighed in the current state of affairs in Washington, including why he left the White House when he did, who Mr. Trump fundamentally is and where the president’s movement is going.

“When I heard the president’s speech on Afghanistan, I knew it was time for me to relocate my desk and my chair,” Mr. Gorka said. “I came in because of my background in counterterrorism and my commitment to defeating radical Islamic terrorism, and when a speech was written for the president that had that phrase removed, after its use multiple times in Riyadh, in front of a joint session of Congress, in Warsaw, I knew that the swamp was in ascendance.”

He described the president as non-ideological, a “preternatural instinctual actor,” and the melding of a “patriot and pragmatist.”

“What he is is a man who cares about making this nation great again,” Mr. Gorka continued. “That slogan is not pablum. It’s not empty rhetoric. He truly wishes to translate what he has done in the private sector, in terms of making a great brand, and translating that back to America’s position in the world and its founding principles.”

Mr. Gorka also dismissed the notion that Mr. Trump is a white supremacist.

Haley Wants to End Obama's Iran Deal; WHY Is Tillerson Trying To Save It?