On September 8, 2017, President Trump signed a bill increasing the debt ceiling to December 8, 2017. The bill also approved $15.25 billion in relief funds for the victims of Hurricane Harvey and Hurricane Irma. It included an 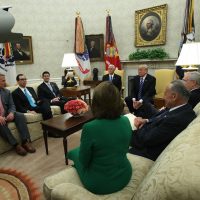 extension of government spending to December 8 as well. Without a debt ceiling increase, the U.S. Treasury does not have enough to disburse the funds to FEMA.

If Treasury did default on its interest payments, three things would happen. First, the federal government could no longer make its monthly payments. Employees would be furloughed and pension payments wouldn’t go out. All those receiving Social Security, Medicare and Medicaid payments would go without. Federal buildings and services would close. Second, the yields of Treasury notes sold on the secondary market would rise. That would create higher interest rates. This would increase the cost of doing business and buying a home. It would slow down economic growth. Third, owners of U.S. Treasury would dump their holdings. That would cause the dollar to plummet. The dollar’s drastic decline could eliminate its status as the world’s reserve currency. The standard of living in America would decline. In this situation, the United States would find itself unable to repay its debt.

President Trump’s debt deal was a genius move, a hand wringing example of the masterful “Art of the Deal”. In a show of bipartisanship, the president reaches a deal to raise the debt ceiling and fund the Government for a few months. Most of all, he was able clear 8 billion for hurricane relief which means his part in this won’t be condemned as it has been with previous administrations.

House speaker, Paul Ryan slapped down the proposed deal at a GOP leadership news conference that took place just before he was due to huddle with Schumer and Pelosi at the White House. The Republican congressman accused them of ‘playing politics’ with Harvey aid and the debt ceiling. But as POTUS has handled business dealings he knows as well as I that if you give a little you get a lot. So, he gave in on debt relief which they would have done anyway and move his agenda item right through to approval. Another problematic egotistical rhino Mitch McConnell, the senate majority leader, can’t get tax reform done which is why The GOP can avoid the worst effects of its legislative failures by passing retroactive tax cuts for this year. The Republican leadership has failed miserably. But the problem is the party is without a real leader on Capitol Hill. The Republicans hate to deal with the debt ceiling and wanted a solution that will take them through the 2018 elections.

However, I believe that Donald Trump as POTUS understands and realizes that without currying favor he will get nothing. It is worthy of note that these long time establishment egomaniacal people have never held a job and they have no idea the sacrifice it takes to keep a business a float. So, he has figured out the way around these obstacles to succeed in fixing America as an experienced businessman that he is. This is Trump’s way of reminding conservatives in both chambers that he likes them but does not need them!

It will come as no surprise if POTUS decides to handle the tax reform legislation in the very same way: sidelining the Republicans at a time when the top Democrats are feeling encouraged by their new position of influence at a time when the top Republicans control the White House and both houses of Congress. Using the Democratic leaders to allow some sort of compromise on the DREAM Act and bring it to the floor at the same time as tax relief for America’s middle class. The POTUS has handled this deal very well.

The Deranged World of Hillary Clinton