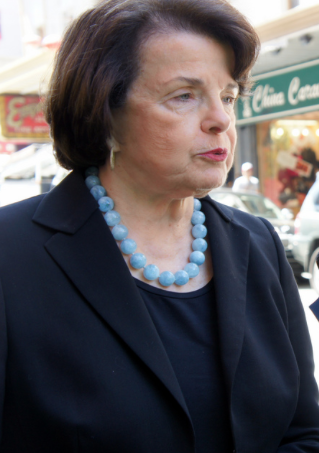 California Democrat Dianne Feinstein must not have gotten the memo on election night: Under no circumstances are any Leftists allowed to offer praise for President Donald Trump. Ever.

What’s happening to Feinstein is proof that the Democrat Party is continually becoming smaller and smaller.  Their grand talk of “inclusiveness” is only relegated to anyone who follows their every whim in complete lockstep and doesn’t disagree with them on any issues, no matter how extreme.

If you don’t believe us, remember Democrat presidential nominee Jim Webb?  During the primary debates the former Virginia Senator proclaimed his support for our military and gun rights–and he hasn’t been heard of since….

So Feinstein found out firsthand how easy it is to be voted OUT of today’s Democrat Party when she dared suggest the President Trump “can be a good president” and that DACA could be deemed illegal.

Sen. Dianne Feinstein has dominated California politics for more than a quarter of a century. But facing blistering criticism that she’s out of touch with the progressive left following her recent comments about President Donald Trump and DACA, it’s increasingly looking like the Democratic lawmaker will face a major primary challenge if she runs for a fifth full term.

Feinstein, the oldest member of the Senate, has been the target of sustained liberal criticism since January. Her centrist brand of politics, skeptical view of single-payer health care and support for some of the president’s earliest nominees have drawn the ire of progressives who have little tolerance for Feinstein’s pragmatic approach in the Trump era.

At times, the senator has been highly critical of Trump. But her recent suggestion that, given time, Trump “can be a good president” — and her concession Tuesday that the Deferred Action for Childhood Arrivals program might be on shaky legal ground — have emboldened her critics and turned a spotlight on her reelection plans.

De León drew national notice last week when he took public umbrage after Feinstein’s seemingly conciliatory remarks about Trump. His public rebuke, the toughest from any prominent state Democrat, was pointed: “This president has not shown any capacity to learn and proven he is not fit for office. It is the responsibility of Congress to hold him accountable — especially Democrats — not be complicit in his reckless behavior.”

Appearing Wednesday on CNN, de León again countered Feinstein — though not directly — forcefully asserting that over 100 legal scholars have said DACA is fully legal and constitutional.

Politico goes on to write,

South says Feinstein’s comments last week about Trump struck many California Democrats as a major misstep in a state where the party’s progressive wing, as evidenced by de León, is increasingly muscular.

To progressives and millennials who are expected to become an energized voting bloc in a 2018 race, “waiting for Donald Trump to a be a good president is like leaving the landing lights on for Amelia Earhart,’’ he told POLITICO.

Dr. Bill Warner: Why I Am A Civilizationist