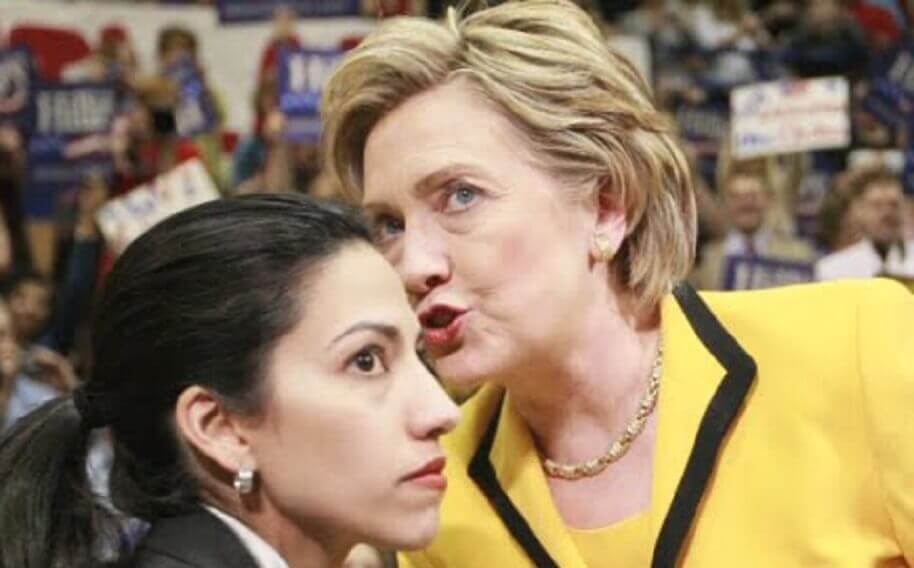 From the great folks at Judicial Watch:

The documents included 97 email exchanges with Clinton not previously turned over to the State Department, bringing the known total to date to at least 627 emails that were not part of the 55,000 pages of emails that Clinton turned over, and further contradicting a statement by Clinton that, “as far as she knew,” all of her government emails had been turned over to department.

The emails are the 20th production of documents obtained in response to a court order in a May 5, 2015, lawsuit Judicial Watch filed against the State Department (Judicial Watch, Inc. v. U.S. Department of State (No. 1:15-cv-00684)). Judicial Watch sued after State failed to respond to a March 18, 2015, Freedom of Information Act (FOIA) request seeking: “All emails of official State Department business received or sent by former Deputy Chief of Staff Huma Abedin from January 1, 2009 through February 1, 2013 using a non-‘state.gov’ email address.” On September 11, 2009, the highly sensitive name and email address of the person giving the classified Presidential Daily Brief was included in an email forwarded to Abedin’s unsecure email account by State Department official Dan Fogerty. The State Department produced many more Clinton and Abedin unsecured emails that were classified:

On August 18, 2009, confidential assistant Monica Hanley provided Abedin with laptop and fob (a physical device that provides a login code) logins and passwords to log onto a laptop, as well as a secure State Department website at https://one.state.gov. Included were a PIN number and instructions on how to access her email from the secure State Department website. Abedin forwarded this information to her unsecure account.

(The FBI interviewed Clinton’s confidential assistant Monica Hanley in its probe of Clinton’s email practices, and State’s Diplomatic Security staff reprimanded her after she left classified material behind in a Moscow hotel room. Hanley was the staffer tasked with finding BlackBerry phones for Clinton to use.)

On August 19, 2009, Hanley asked Abedin to call her and provide Abedin’s computer password so that she could download a UN document for Cheryl Mills from Abedin’s computer. Instead of calling Hanley, Abedin apparently provided the computer password in her unsecure reply email, saying, “Its [redacted].” On April 17, 2009, Clinton aide Lona Valmoro emailed Clinton’s sensitive daily schedule for April 18 to various Clinton Foundation officials, including Doug Band, Terry Krinvic and Justin Cooper. She also forwarded Clinton’s daily schedule for July 16 to numerous Clinton Foundation officials. She did the same thing on September 8, 2009. She did so again on January 10, January 14 and April 11, 2010.

The details of Hillary’s arrival on November 18, 2009, in war-torn Kabul, Afghanistan, for the inauguration of President Karzai, were found on Abedin’s unsecure email account. Included were precise times of landing at Kabul Airport, the occupants of her vehicle, arrival and departure times at the U.S. Embassy in Kabul, and meeting times with U.S. forces in Afghanistan.

The new documents show that Clinton donors frequently requested and received special favors from the State Department that were connected to the Clinton Foundation.

On July 14, 2009, Gordon Griffin, a XL Keystone lobbyist, sent an email to Clinton Foundation executive Doug Band, asking if Band could get him into a Council on Foreign Relations dinner at which Clinton was speaking. Band forwarded the email to Abedin, saying, “Can u get him in?” Abedin replied: “Yes will get him in.” Band was a top aide to President Bill Clinton and co-founder of Teneo. Griffin was a major donor to Hillary Clinton’s Senate and presidential campaigns.

On July 16, 2009, Zachary Schwartz asked Band for help getting visas to travel to Cuba for a film production crew from Shangri La Entertainment. Band forwarded the request to Abedin, telling her, “Please call zach asap on this. [Redacted.] Important.” Abedin responded, “I’ll call zach when we land in India.” Abedin concludes with “Enjoy. Cuba is complicated. Am sure you aren’t surprised to hear that.” Schwartz worked for Steve Bing, a mega-donor to the Clintons and owner of Shangri La Entertainment. Bing has reportedly donated $10-25 million to the Clinton Foundation and paid Bill Clinton personally $2.5 million a year to be an adviser to a green construction company Bing owned.

On September 11, 2009, Terrence Duffy, chairman of futures brokerage firm CME Group, a donor to the Clinton Foundation, asked Clinton to arrange “government appointments” for him in Singapore and Hong Kong. Clinton, using her [email protected] address, forwarded the request to Abedin, “fyi.” Abedin responded to Duffy’s email, saying she would “follow up” with Duffy’s secretary, Joyce. Duffy gave $4,600 to Hillary’s 2008 presidential campaign; CME Group paid Hillary $225,000 for a speaking fee and has donated between $5,001 and 10,000 to the Clinton Foundation.

Abedin, using her [email protected] address, later told Joyce, “Would like to get some more information and details so we can try to help.” Further along in the exchange, Joyce responds “We would also like some help in arranging meetings with some key govt officials in both locations, such as the Prime Minister of Singapore, and would appreciate any help you may be able to provide.”

On September 29, 2009, Abedin followed up with Duffy, telling him that “we are happy to assist with any and all meetings” and that she had “discussed you and your trip with our assistant secretary of state for east asia and pacific affairs,” suggesting that Duffy write the assistant secretary, Kurt Campbell. Duffy replied, “Thank you very much. I did connect with Kurt Campbell today.”

The emails also provide insight on the inner workings of the Clinton State Department, in particular her engagement with her staff.

In a May 19, 2009, “Global Press Conference” memo, Clinton was given in advance the “proposed questions” of four of the seven foreign reporters. Examples include: “What is the Obama administration’s view of Australian PM Rudd’s proposal to form an Asia-Pacific Community” and “Why can’t American drones not find, detect and destroy the insurgency supply line?” In a document entitled “HRC Pakistan Notes” prepared for Clinton by her staff, Clinton apparently had to be reminded about all her trips to Pakistan and of “stories that you have told/remember.” Her reminder instructions include: “You loved Faisal mosque, and it was especially meaningful to have CVC [Chelsea] with you.” And: “Your first Pakistani friend was in College. She introduced you to Pakistani food and clothes.” And: “You have had lots of Pakistani and Pakistani American friends over the years. From Chicago to California to Washington, DC, you have friends all over the country. They know how much you love Pakistani food …”

On February 12, 2010, Case Button, a Clinton speechwriter, asked Abedin if her mother, a professor at Dar Al Hekma, a women’s university in Saudi Arabia where Clinton held a town hall meeting, would be willing to give him advice on talking points he was preparing for Clinton. Abedin responded, “Talk to my mom for sure. She will have good points for you.” After reviewing Hillary’s draft remarks, Huma’s mother, Saleha Abedin, (a controversial Islamist activist), offered some advice: “Do not use the political terms such as ‘democracy/elections/freedom.’ Do not use the term ‘empowerment of women’ instead say ‘enabling women’ Do not even mention driving for women! Don’t sound sympathetic to ‘women’s plight’ or be ‘patronizing’ as other visitors have done and made the students extremely annoyed. They rightly consider these as in-house issues …” No references to these issues appear in Clinton’s speech.

Abedin’s involvement in a major appointment at the State Department is controversial given that Abedin’s mother was an Islamist activist. On July 24, 2009, Cheryl Mills forwarded to Abedin a CV for someone being considered for the position of Special Envoy to the Organization of Islamic Cooperation. It had been sent to Mills from State Department recruiter Margaret Carpenter. Rather than forwarding the resume on to Clinton for her approval, Abedin simply responds to Mills: “I’m a hundred percent fine with him.”

Abedin also offered her opinion to Clinton on administration leaders: On January 21, 2011, while on a trip to Mexico, Abedin emailed Hillary that “Biden is a disaster here.”

On February 20, 2012, Clinton expresses outrage over an apparent wardrobe miscommunication for a meeting in Mexico and sent an email to Abedin with the subject line “I’m venting.” Clinton admonished:
So, here I sit in the meeting surrounded by ever other person dressed in a white shirt provided by the Mexicans. Patricia is not wearing the exact style that all others are but her own white shirt. But, since no one ever told me about this, and instead assumed I didn’t need to know, I had no idea about any of this until I just walked into the large meeting in front of the entire press corps and I’m wearing a green top. So, what’s my answer when asked why I think I’m different than all my colleagues and why I’m dissing our hosts? I am sick of people deciding what I should know rather than giving me the info so I can make a decision. This really annoys me and I told Monica [Hanley] I just didn’t understand.

“The emails show ‘what happened’ was that Hillary Clinton and Huma Abedin obviously violated laws about the handling of classified information and turned the State Department into a pay for play tool for the corrupt Clinton Foundation,” said Judicial Watch President Tom Fitton. “The clear and mounting evidence of pay for play and mishandling of classified information warrant a serious criminal investigation by an independent Trump Justice Department.”

Some Democrats Backing Away From Violent ANTIFA Fascists

Despite What Pelosi Says, Trump "Is Committed to Building the Wall"