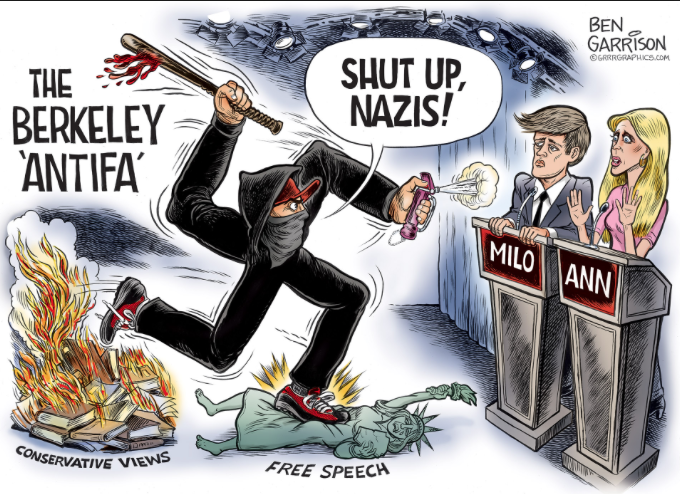 Conservative pundit Ben Shapiro is likely to escape unscathed from antifa protesters planning to wreak havoc during his speech Thursday at the University of California, Berkeley, but the left may not be so lucky.

The black-clad activists have driven a wedge between Democrats such as House Minority Leader Nancy Pelosi who condemned antifa by name in the wake of a violent protest last month in Berkeley, and leftists who have rushed to the defense of the self-styled “anti-fascists.”

Refuse Fascism denounced the “shameful, dangerous, wrong attacks on Antifa,” taking aim at Berkeley Mayor Jesse Arreguin, who said the activists should be classified as a “gang,” and left-wing icon Noam Chomsky, who described them as a “major gift to the right.”

“To stand against injustice at this moment requires firmly understanding that the attacks against ‘Antifa’ are designed to intimidate, suppress, and divide all opposition to fascism,” Refuse Fascism said in a Saturday statement.

Liberals tried to distance themselves from antifa after the Aug. 27 skirmish, in which 13 were arrested and six injured as black-masked protesters attacked Trump supporters and a photographer. The episodes were caught on video.

“They believe they’re defending themselves and others, but what I saw on Sunday is they were the aggressors,” Mr. Arreguin said of antifa.

David Horowitz, a conservative author and researcher on left-wing movements, said the backlash — in particular the statement by Mrs. Pelosi — represents a turning point for antifa.

“She’s very clever tactically, and she sees that this is a menace to the left,” Mr. Horowitz said.
Fueling the fire were another nine arrests last weekend in Portland and Vancouver, Washington, at a peaceful free speech rally by Patriot Prayer. Two officers suffered minor injuries.