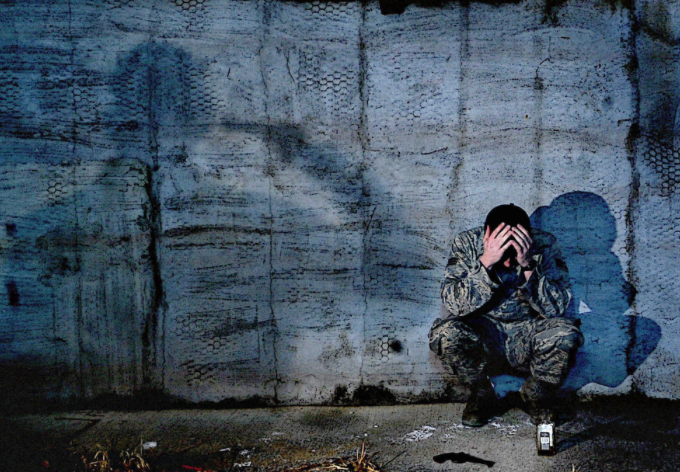 “Darkness, darkness, be my blanket

Cover me with endless night”-

As we approach the autumn of October I am reminded by my own experiences that September can be a cruel month. In fact, the trials of this world make it sometimes difficult to survive with your humanity intact. I always remember that September is Suicide Awareness Month. Additionally, September 10th is World Suicide Prevention Day. Those that despair in darkness should remember there is always a hand and a heart that can reach you if you allow someone an opening. Every day should be a suicide prevention day.

Last Year, on September 26th, Politichicks published my article entitled, “Surviving Suicide-A Personal Journey,” in which I revealed my own personal experiences with the suicide of a loved one. In my case, my father George, a Veteran, who was a murder victim in a murder-suicide in December 1965, and my brother George, a Veteran, who completed the act of suicide in September 1996. If you are considering suicide or are grappling with the suicide of a loved one, I urge you to read the aforementioned article or better yet, seek the appropriate counseling.

This September I have decided to address the troubling issue of suicide among our Veterans. Coming from a Military family, the statistics alarm me. It has been stated in reports and previous articles that we are facing an average of 22 suicides a day among our Veterans. That may be a conservative estimate as the States of California and Texas do not report Veteran deaths by suicide. That is especially disturbing as California and Texas are both heavily populated by a large Veteran populations, especially from the Vietnam era.

On September 17, 2017, Fox News reported that the Department of Veterans Affairs had released data indicating that the highest rate of suicide was in the West and rural areas. The findings determined that New Mexico, Nevada, Utah and Montana represented the highest rate at 60 per 100,000 individuals. That is nearly double the national rate of 38.4. Many veterans in those states have to drive 70 miles or more to find the nearest VA medical center.

Kentucky, West Virginia and Oklahoma also have high Veteran suicide rates which has been attributed to greater incidents of prescription drug abuse, particularly opioids. It has been reported that veterans who received higher does of opioid painkillers were twice as likely to die by suicide as opposed to those who received minimal doses.

Gender also played in a key role in the Veteran’s Administration report. Women Veterans had a suicide rate 2.5 times greater than their civilian counterparts with the risk 19 percent higher among male Veterans compared to civilians.

The majority of Military suicides are among elderly Veterans. Roughly 65 percent of the cases are among those 50 years old or older. Per the Veteran Administration’s report, isolation, addiction, limited access to medical care and access to guns are contributing factors to those at risk of committing suicide.

We must also add into the mix PTSD and complex medical issues that are difficult to treat. As I discovered in my own life and my own research, no state or family is immune from the specter of suicide.

In regards to the recent Veteran’s Administration’s findings, VA Secretary David Shulkin stated, “These findings are deeply concerning, which is why I made suicide prevention my top clinical priority. This is a national public health issue.” President Trump stated recently that America “must do more” to help veterans struggling with mental issues.

But the men and women of our Armed Forces are more than a cold statistic. Whether 50, 22 or one a day, any veteran suicide is unacceptable. In a broader sense, as a society, any person that commits suicide is unacceptable and more than a number on a report. The carnage left behind by the suicide of a loved one is unimaginable and it is a wound that never truly heals.

I understand that suicide can be generational. I have had friends who have had more than one family member commit suicide. I find that those who seek to complete the act of suicide seem to be starving spiritually. The night before my brother committed suicide, he held my mother’s hand and sang the hymn, “Amazing Grace.” He desperately wanted the peace of Heaven. The God I love is infinitely forgiving and I believe my brother found the peace he was seeking.

But what of our living Veterans and their needs? In the past, many vets that seek to continue their military service have joined the National Guard. But as my friend Robert Vicci, LTC (Ret) CEO of www. VetREST.org stated to me recently, “Traditionally, we have seen our National Guard units populate by those leaving the Active Duty (AD) and who are looking for a more stabilized, possibly part time military duty versus full time. For many years now, the POTUS have been downsizing our Active Duty Force.”

From my e-mails and conversations with Robert Vicci I understand now that because of the downsizing of the military, National Guard units are deployed far more often than they should be. For the modern day patriot warrior it is more challenging to finish the 20 years required for full retirement. A difficult number to reach especially if you are weary of Active Duty. Some of that weariness is due to a lack of material and spiritual support given to our our Active Duty Personnel by the United States Congress and some previous Presidents. They should all hang their heads in shame.

So what can we do as citizens who respect and cherish our veterans? I think it is time for a different sort of draft. A citizen’s draft where we step up as individuals and groups and start taking care of those who have protected us. I am encouraged by the recent changes in Veteran medical care legislation by our current administration, but does that include comprehensive mental health care? We are morally irresponsible as a nation if we do not take care of our warriors, especially our elderly warriors. Remember the statistic I stated about the majority of veteran suicides occurring from vets 50 or older.

It may be time for warriors to counsel warriors in a broader manner. The Trump administration and the American people need to actively seek out and support organizations where Veterans counsel Veterans. Let’s face it if you were a vet with PTSD, or a possible suicide risk, who would you rather talk to; a Psychiatrist who writes you a script or a vet that re-ran similar horrors inside their heads, but somehow managed to come out intact?

I wholeheartedly seek to support and promote organizations like VetREST.org because they hire vets and directly take the counseling to the veteran in need.

VetRest is working diligently with out Veterans, and many Police and EMT’s who are struggling with PTSD, to identify and resolve those issues within the “hidden battle” they are fighting. Often, once VetREST resolves real life problems like homelessness, unemployment or underemployment, legal and other financial issues, the family unit may be rebuilt and the Veteran may be able to redefine their identity. VetREST turns many clients into coaches, where warrior counsels warrior.

I also think it is also important to start out locally and think globally. Pay attention to your local Veteran’s organizations and do the research on their effectiveness. Please branch out to include folks like VetREST, who have had some great success in treating vets who suffer from PTSD and vets that are suicide risks.

There is not a day that I go through without the remembrance of my brother, my father, and sometimes the too many friends that I have lost to suicide. More and more, I think of our vets when I see the numbers of completed suicides. Easy to be horrified, harder to cultivate change and healing.

I am looking for my own way to contribute to the healing of out veterans, maybe giving Blues guitar lessons to veterans interested at a local veterans organization? I start with this article. But, in closing, my personal melancholy about the September suicide anniversary of my brother reminds me of some of the lyrics from the song, “September When It Comes,” as sung by Roseanne and Johnny Cash:

“I watch the clouds go sailing

I watch the clock and sun

Oh, I watch myself, depending on

September when it comes.”

Kneeling at the Altar of the Leftist Agenda