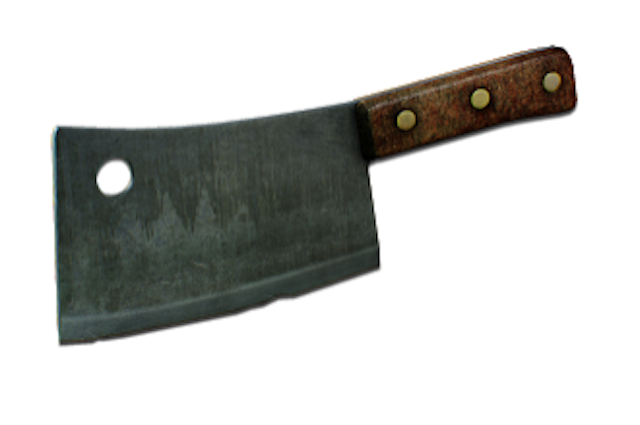 Kenny Herring was very angry over a neighbor’s barbecue fire. It was early in the morning in St. Louis. Kristy Lynn Thompson, Kenny’s wife, handed him a large butcher knife.

And then Kenny tried to make mincemeat out of his neighbor.

But Kenny still wasn’t done. He waved the knife around and stabbed an officer in the arm. And was shot and killed. Thompson was arrested and charged with assault and criminal action.

It’s not an unusual story. This is what police officers do a lot of the time when they make “housecalls” in St. Louis, Baltimore, Oakland and Detroit. It wasn’t the first time the cops had been forced to respond to “domestic disturbances” at Kenny’s place. But now it would be the last.

What happened on Ridge Avenue was bad. But it could have been much worse for the victims of Kenny’s violent rampage.

The victim has a collapsed lung. He will spend time in rehab and will probably never be the same again. The police officers who shot Kenny will need counseling. All of them will relive that horrible morning in their nightmares.

But wait. The story isn’t over.

Kenny Herring was African-American and he identified as “Kiki”, a woman. And by the left’s current rules that means that no matter whom he stabbed, the police officers had no right to shoot him.

There is never any excuse for shooting a member of an intersectional “marginalized” group.

Activists claimed that the downstairs neighbors had been “bullying” and “harassing” Kenny for years. These accusations against the victim of a violent crime were never backed by a single shred of evidence. Instead it was assumed that if a member of an oppressed group stabs his neighbor through the lung, the man he stabbed must have had it coming. There were even calls to free Thompson to “mourn” Herring.

The Metro Trans Umbrella Group blamed “systematic racism and white supremacy.” Neither the police officers nor the victim have been named, but considering the neighborhood, the odds are good that Kenny’s victim was also African-American. Some activists suggested that the police might have “planted” a knife on Kenny. But did they also plant the stab wounds on his victim’s face and in his lung?

“If you’re a cop & you can’t defend yourself against someone with a knife WITHOUT killing them. Don’t be a cop,” one activist insisted in a widely circulated tweet.

The “peaceful” candlelight vigil to “honor” a vicious monster didn’t take long to go off the rails. The microphone was supposed to be ”prioritized for black and brown trans and queer people of color.” The protesters seemed angrier about President Trump than Herring’s death. The police had only shot Herring because of racism and transphobia. And Trump was the embodiment of both.

Activists shouting “Get off the sidewalk” crowded a busy street. There were Black Lives Matter signs and rainbow flags. When a driver stopped and honked, they pounded on his car and threatened him. They jumped on the hood. He drove forward. They fell off and were lightly injured. And now he’s under arrest.

Mayor Lyda Krewson sided with the protesters. “Driving into people is totally wrong. People have a right to protest, he should have used common sense and turned around.”

While people have a right to protest, do they have a right to block busy streets or to attack drivers who honk at them? The police on the scene should have been allowed to keep order by preventing the protesters from blocking the street. Instead they were reduced to cleaning up the mess afterward.

This is what keeps on happening when the authorities give leftists protesters a blank check.

Drivers, Mayor Krewson insisted, should have taken another route. The protesters had every right to block the street. It was the drivers trying to get home who had suddenly lost their right to the street. Activists accused the driver of being a white heterosexual male. It’s unknown how they figured out his sexual orientation through a windshield. But the accusation speaks eloquently to their prejudices.

And the fallout from Kenny Herring’s stabbing spree shows why we can’t have both justice and identity politics. Either we have one set of laws for everyone. Or we hand out special passes for stabbing your neighbor as long as the stabber has racked up enough intersectional victimhood points. Either everyone has to follow traffic laws or everyone except angry leftists with a cause have to follow them.

The intersectional creed of the left tells us that it’s not our morality, but our oppression that defines us. Victimhood is our inheritance. We are born into it and it sums up all our relationships with other people. Kenny Herring was always a victim. Even while stabbing another man in the face, he was a victim. His death is a call for outrage. It is an indictment of the white supremacy and systemic racism of the police officers who shot him to keep him from stabbing them as brutally as he had stabbed his neighbor.

Police officers are always perpetrators. And the saints of identity politics are always the victims.

But the blood on the floor in a flat on Ridge Avenue tells a different story. It reminds us that our true identity lies in the choices that we make. And that it is these choices that define who we are.

Kenny chose to be a monster. He sealed that decision by planting a butcher knife in a man’s face. And the police officers who shot him down were heroes who put their own lives at risk for a man they had never met before this moment. There are bad police officers out there, but we must never forget the men and women in blue who go into situations like this without ever knowing if they will make it out.

And there lying in a hospital is the real victim of this entire story. He isn’t the victim because of his race, his sexual identity or gender, but because he was stabbed over and over again by a deranged criminal.

Victimhood isn’t something you’re born with in this country. It’s something that happens to you.

But victimhood is not race or orientation. It can be as simple as living next to a crazy person. It isn’t a theory. There are no classes needed to make sense of it. It’s being in the wrong place at the wrong time.

The best defense against becoming a victim isn’t to create special classes of the oppressed: a group that includes Kenny and his butcher knife along with the car pounding “peaceful” vigil in his name.

It’s equal laws that protect everyone. It’s only when we privilege some crazy stabbers because of their race or gender, that we devalue the humanity of everyone else and then we all become victims.