Three creatures on earth are impossible to get rid of: lice, cockroaches and Clintons. 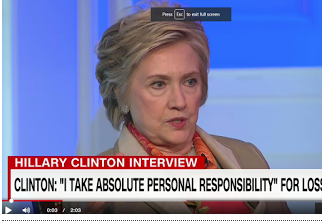 Hillary Clinton spent a third of her miserable adult life trying to get into the White House. Now the nation’s failed Harridan-in-Chief is determined to spend her remaining years blaming everyone, from Matt Lauer to the Electoral College, for having to live out the rest of her life in flat broke poverty in the eleven rooms of her Georgian Colonial mansion (and the neighboring mansion in their cul-de-sac too).

And probably the starting lineup of the Denver Broncos. You’ll have to buy the book for the full list.

But What Happened, Hillary’s spiteful magnum opus, does actually answer its titular question.

Hillary Clinton is a terrible person. Her politics are terrible. She’s a nasty creature whose hatred, entitlement and greed are in direct proportion to her mountainous avalanches of self-pity.

And What Happened sums up those qualities the way that none of her previous biographies ever did.

What Happened isn’t Hillary unfiltered. The only people privileged to witness that were the Secret Service agents she threw things at and the aides who had to frantically cater to her every whim.

What Happened is still told in Hillary’s treacly insincere voice. But for the first time, its topic isn’t a bunch of insincere platitudes assembled by some combination of aides, staffers, ghostwriters and pollsters.

All that is over.

The carefully constructed machine built to take Hillary to the White House broke down on Wisconsin Highway 14, Florida State Road 20 and Pennsylvania Route 22. Only a skeleton staff of loyalists stayed to help Hillary turn her name recognition and remaining connections into filthy lucre and filthier spite.

That’s what What Happened is. Hillary gets to lash out at everyone and get paid for it. Not only is she upstaging Bernie’s book tour while trying to tie him to Trump, she’s taking shots at another likely Dem 2020er, Joe Biden, not to mention her own badly used DNC and everyone who didn’t vote for her.

If Hillary can’t be president, she’s going to make damn sure that none of her Dem rivals will either.

Hillary will be taking the millions that she had to spend to fight off Bernie in state after state out of his hide piece by piece. And Biden’s vacillation about the entering the race will cost him too.

How much vengeance can Hillary extract with a book? Ask Bernie.

Bernie’s book tour will suffer similarly. He’s already being forced to respond to Hillary’s accusations. Instead of being able to position his brand for 2020, the book tour will be a repeat of the primaries.

He sabotaged Hillary’s campaign launch. He cost her time, money and energy that she needed for the general election. Now she’s repaying him in kind.

That is who Hillary is.

Joe Biden will have his own book launch in November. And Hillary will be there playing Tonya Harding. Biden’s efforts to get in the race made some Dem donors delay their funding of her campaign.

And Hillary has not forgotten.

What’s the point? Her political career is over. After the last election, there’s no way that even the Green Party or the Pedophile Cannibal Satanists of America would let her top their ticket.

But Hillary doesn’t care. This isn’t about politics. It’s spite. And she would rather see Trump win another term than have Bernie in the White House. That’s who she is. That’s who she has always been.

What Happened is a unique post-campaign biography: it chronicles why its author should never have been president.

After a catastrophic defeat, Hillary has spent her political retirement dividing the country by casting doubt on her opponent’s victory. The Russia conspiracy theory was the brainchild of her political operatives and it helped convince Dems to push for impeachment while calling Republicans, traitors. The unhinged ravings of Louise Mensch and Keith Olbermann have their origins in her conspiracy theory.

This wasn’t a gift to the Dems.

The conspiracy theory was wholly self-serving. It excused her from any of the blame and prevented the Dems from figuring out what went wrong. Instead of learning how to talk to the white working class voters they lost, the Democrats reeled further to the left and bet everything on impeachment.

But Hillary didn’t just turn our national politics into Chernobyl and call it a day. Instead she’s obsessed with settling scores with her primary opponents and even, like Biden, potential primary opponents.

Nobody who ran or even thought of running against her should be allowed to become president. Trump, Bernie and Biden are all on the list. So is everyone who ever questioned or undermined her.

They all must pay.

If you want to wake up screaming in the middle of the night, imagine the same twisted spiteful creature orchestrating all this being able to control the entire country, instead of just appear on NBC or CNN.

But while Democrats wish Hillary Clinton would go away, she embodies today’s left better than anyone.

Hillary was America’s First Crybully: the malicious professional victim, the abuser who claims to be the abused, the black nationalist thug throwing cinderblocks at police while shrieking, “Hands up, don’t shoot” and the leftist campus protesters screaming how afraid they are while they terrorize speakers.

What Happened is Hillary’s crybullying text. It’s an attack posing as victimhood.

It’s Hillary pretending to be frightened of Rick Lazio, her Republican opponent in the Senate race, crying in New Hampshire during the first primaries before launching an attack on Obama and exploiting her husband’s infidelity for her Senate run. It’s every low and shameful moment condensed into a post-campaign biography that no one, except the devils on both her shoulders, asked for.

There’s always a vast conspiracy that explains her malfeasance. And her own crimes, corruption and character flaws become weapons to be used against her critics and rivals.

What happened is Hillary.

“Evil destroys even itself,” Aristotle observed. “And when present in its entirety becomes unbearable.”

The ancient Greek had her number. Hillary destroyed her own campaign. Twice. And as her malice spews out unchecked, even her own former supporters are finding her unbearable.

Hillary failed to build a successful presidential campaign. Now she is building an anti-campaign.

Unable to create, she is following the natural trajectory of evil to destroy. It doesn’t matter to her whether she destroys Republicans or Democrats as she poisons the well of public discourse that we all drink from. If Hillary can’t rule over America, she might as well bring it down in flames.

There’s no political future for the Clintons. Bill is an erratic and faded figure. Chelsea will never evolve beyond a failed internet troll. And Hillary is tethered to them and to her own political disasters.

Nothing awaits her except the inevitable ravages of mortality.

In 2013, I wrote, Why Hillary Will Lose Again which concluded with, “At the Benghazi hearings, Hillary famously demanded to know what difference it made. The same can be said of her life.”

But Hillary will not go gracefully. She will not wander the woods of Chappaqua, appear at occasional fundraisers (at a high fee) and sit on the board of some environmentalist group. As the darkness approaches, she will lash out and harm all those who frustrated her political ambitions. She will rage, wreck and ruin. The only difference she will make will be through her hatred and destruction.