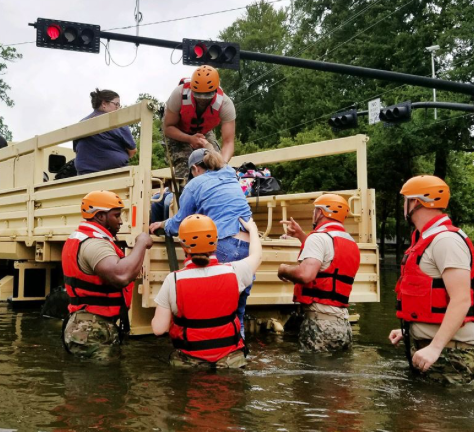 We are still a great people. The rescuers remind us of that. But we lack the culture or the politics to reflect that greatness. The noble impulses that lead men to risk their lives in flooding are there. But our society no longer has the vessels to hold and sustain those impulses.

The media doesn’t quite know what to make of the rescuers. You can see the itching to return to the stories that it knows and likes. Russia. Trump hit pieces. People punching each other in the street over politics. It swerves at the first sight of a Confederate flag on a rescue boat or Ted Cruz’s Sandy vote. It doesn’t want to dwell on the best of us. Behavior like that doesn’t make sense anymore.

Generations have grown up with leftist protesters as their definition of heroes. Look in a history book and the last 70 years consisted of “heroes” who marched around waving signs until they got everything they wanted. And everyday in the news there are more “heroes” marching for illegal aliens, transgender bathrooms, the supremacy of black lives and any other identity politics cause.

But waving a placard to the adulation of the media isn’t heroism. Saving lives is.

Our culture has quickly forgotten that less than two decades ago, men carrying half their weight climbed to the top of the World Trade Center to save lives. They died there.

The America of a hundred or even fifty years ago, would have immortalized them. Ours drowned them out in tantrums, in whines, in anger and outrage, in malicious noise.

They were a dangerous reminder that we were a great people. And our destroyers desperately wanted us to forget. They wanted us to sink to the bottom. Not to rise to the moment.

The secret of so much of our greatness was simply that we tried. We took our best and we made it the cultural norm. Every people tell themselves that they are wonderful and destined to rule the world. The Germans and the Russians believed it and it led them to ruin. But we told each other that we were decent and we became decent. We told our children that the moon could be theirs. And it was.

But more importantly, we told them about sportsmanship. We told them to stand up for principles. To take pride in hard work. To believe in the future. To tell the truth. To help old ladies across the street. To tie knots well. To sacrifice for family. To see themselves as heroes, however unlikely.

We made all of those things into a culture. That was the secret. Anyone could have done it. You just had to believe.

And that culture has been slowly dying. Some days it looks almost dead.

Our culture and politics exist to give us permission to lie in the mud. That has become their unhidden purpose. Decency is a dead language. Shock value is our entertainment. Contempt and outrage are our national discourse. The Chinese build cities and islands. We yell at each other over the Internet.

It’s hard to remember a time when writing the Great American Novel was an ambition. The American novel is dead. Literature, like art, has become segmented into high brow garbage and low brow garbage. The aspirational middle brow culture is dead.

The movie theater is filled with billion dollar adaptations of comic books, Disney rides and cartoons. The handful of teens who can be pried away from their phones long enough to watch something they’ll forget five minutes later aren’t even the target audience. America is a stopover territory on the way to the real markets in the teeming cities of China.

How does a culture like that deal with heroism? It can’t. It doesn’t have the vocabulary for it.

We can still marvel at it. But it’s not enough to be impressed by good men and women doing the right thing. Cultures that succeed don’t just marvel, they preserve it and pass it on. They build dams around virtue. They harness it and plug in the next generation.

We wonder why the Iraqis or Afghans can’t stop killing each other. We explain democracy to them, but it’s as meaningless as trying to teach a goat how to paint. But behaviors have to be embodied in a cultural language. Otherwise it’s just so much noise.

Civilization is written in the language of values. That language tells us how to behave and how to live. Without that language, we’re savages. And savages are not that hard to find all around us. And when you spend enough time around savages, you begin to go native. 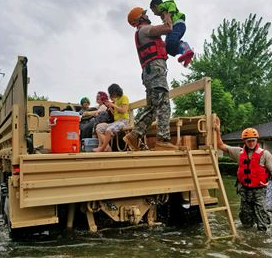 Heroism is the beacon in the night. It inspires and shocks us. It reminds us of what we can be.

The extraordinary moment passes. But it doesn’t need to it.

Everyone dies. Heroes, victims and villains all perish. But some values live on in a culture. And that is our choice. We can be a great people. But at the very least, we must remember that we are.