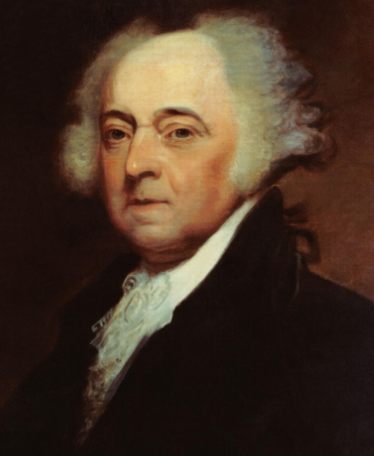 A while back, I thought of writing a satirical piece in which former Presidents throughout history gave advice to President Trump. While I think advice from Presidents such as Andrew Jackson and Theodore Roosevelt would be quite interesting, from a practical perspective, I ultimately focused on John Adams. I didn’t expect that to be the case, but our 2nd President had remarkable insights into the future. I don’t even have to imagine what Adams might have said to Trump because Adams’ actual quotes suffice.

The beauty of examining Adams’ actions and beliefs is that as an undisputed American Patriot and Founding Father, he helped design the the laws which govern our nation today. He was also a controversial figure and did and said bold things. If one examines the actual life of the man, it provides insight into his concepts of society and free speech. I seriously doubt he would approve of the narrative being pushed by leftists.

If nothing else, Adams was a practical, civilized man. He believed in vigorous vocal opposition to the things he opposed such as the Stamp Act of 1765. The Stamp Act was one of the major contributing factors leading to the Revolutionary War as it imposed taxes on Colonists without their consent (i.e. taxation without representation). However, despite his opposition to the Act, Adams drew the line at mob rule/mentality. Sound familiar? Adams knew that mob protests would ultimately lead to violence. It’s only by the Grace of God we haven’t had a full scale riot.

The Colonists had legitimate reason to be upset.

People who protested Trump’s election were protesting the results of a valid election. Adams despised the Stamp Act but he detested anarchy even more. To that end, he provided legal defense to British soldiers who killed Stamp protestors. His argument? A mob represents a highly dangerous situation and the target(s) of their anger are acting rationally if they act to defend themselves. Adams didn’t earn friends for defending the Brits but it did show he put ethics and principles ahead of anger.

Adams also understood how to handle the press.

The First Amendment. The philosophical issues it raises are all but impossible to resolve. Free speech is our most important freedom. It is central to a free and democratic society. However, like any freedom it must be exercised prudently and responsibly. The irony of free speech is that if abused, it can also be the catalyst to destroy a democracy. As a Founding Father, Adams’ view of the First Amendment is extremely relevant…he helped frame the Constitution which established it! The Congress that passed the Alien and Sedition Acts of 1798 (signed into law by Adams) was also part of the Founding Generation. Their view of the First Amendment wasn’t an interpretation of a law passed over 200 years ago, it was based on its true intent because it was a contemporary issue to them.

What were the Alien and Sedition Acts and why were they passed?

Like any law, they were a product of their times. England and France were at war and tensions between the newly established United States and France were high. Our new country was hardly a superpower, so national security was top priority. The Alien and Sedition Acts gave President Adams two important powers. First, it gave him power to imprison and deport any non-citizen that were either deemed dangerous or came from a country hostile to the United States. Second, it gave him power to to imprison those who spread false statements critical of the government.

Such a law would be decried if passed today.

It would result in the weeping and gnashing of teeth as described in the Bible. However, what effect did this law actually have? At the time public sentiment was overwhelmingly in support of war with France. An unchecked media may have forced Adams into actually entering a war with France. I don’t believe these acts created a moral dilemma for Adams. The results speak for themselves. Adams wisely decided against war with France. In 1805, under the leadership of Napoleon, France defeated Russia, Britain, Sweden, and Naples. A war with France would have meant the destruction of the United States. The wisdom of an elected leader and elected leadership proved superior to the desires of the press. Also, the censorship wasn’t permanent. Jefferson let the Sedition part of the Acts expire.

Now, in 2017 this nation once again must address the issue of free speech.

Can mainstream media and President Trump co-exist and if not, who should prevail? If I have learned one thing, it’s the fact that the wealthy do not like to lose money. Hillary Clinton’s campaign raised $1.2 billion mainly from wealthy donors. If you believe there wasn’t a quid pro quo agreement in place, God help you. The entire 2016 campaign was supposed to be a coronation tour for Hillary. A lot of money was invested in her. Trump pulled off a miracle and stopped her. As a result, a lot of people lost money. Clinton had no qualms about selling out this country. Trump stopped her. The anger and hatred being directed at Trump stems from lost money and shattered plans. The media threw in with Hillary. They could care less about legitimate news. All they care about is convincing people that Trump is an evil madman controlled by Russians. As a result he must be removed from office by any means necessary. In reality, Trump is a duly elected President. So, ask yourself, what is more important? Protecting seditious speech or protecting the right of people to select their leader?

What would John Adams say? Here are some of his quotes (followed by my observations):

“Remember, democracy never lasts long. It soon wastes, exhausts, and murders itself. There never was a democracy yet that did not commit suicide.”

What irony. Did we beat the USSR in the Cold War only to die at the hands of domestic leftist ideals?

“Power always thinks it has a great soul and vast views beyond the comprehension of the weak.”

A perfect description of so-called American intellectuals. They epitomize arrogance and self-righteousness. They see the American flag as a hate symbol.

“Power always thinks… that it is doing God’s service when it is violating all his laws.”

Open borders, embracing radical concepts, and enforcing a strict code of misguided ‘political correctness’ is NOT serving God. It’s the means by which a Christian nation is destroyed.

“ Our Constitution was made only for a moral and religious people. It is wholly inadequate to the government of any other.”

Are people who embrace socialist views and a secular godless society moral or godly?

“Abuse of words has been the great instrument of sophistry and chicanery, of party, faction, and division of society.”

In my wildest imagination, I never thought Donald Trump would one day emerge as the last best hope for America’s survival. He is in the fight of his life and this country’s soul is in jeopardy. I never thought I would see an American President persecuted to such extremes nor did I ever envision an American President holding rallies where people chant ‘USA! USA! USA!’ and this country not even be engaged in a foreign war. President Donald John Trump is not only in a political battle but an ideological battle as well. He is leading the fight to reclaim not only our sovereignty and natural resources, but also our national identity. I pray God grants him the wisdom to outmaneuver his enemies and bring them to justice and I pray God helps him to not only make America Great Again, but also to Make America ‘America’ Again.

What is a “Single Payer Healthcare” System?