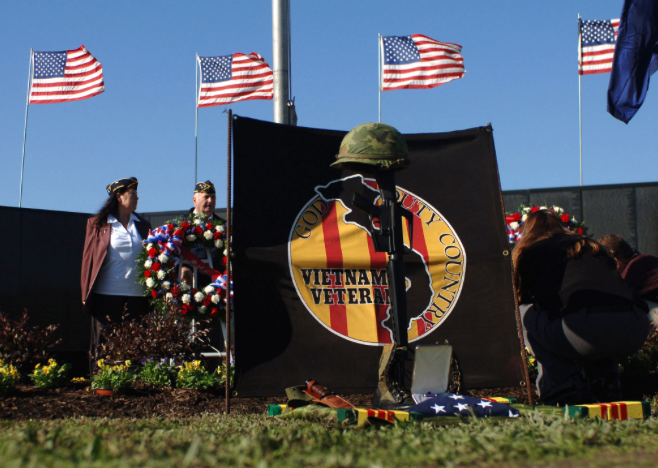 I must preface this essay by disclosing that I am a Vietnam Veteran having been stationed in Thailand and Vietnam in the late 60s. Three years ago, I had my right kidney removed because it had a tennis-ball sized tumor in it that had gone undetected “for a long time”, according to my Oncologist and Surgeon.

Today, I am about a three weeks from having a lesion removed from my right lung that is more likely than not a spread of the renal cell cancer from my kidney.

That having been said, based on the many testimonies from widows of veterans and the fact that there is a Facebook group solely composed of veterans and widows of veterans who have had to deal with the after-effects of exposure to Agent Orange (AO), my case is far less disturbing that many who have gone before me. It may get better or worse solely based on God’s will for my life. I am prepared either way.

My first motivation in writing this is to raise awareness and generate political action on the part of the VA to expand the list of diseases presumed to be connected to Agent Orange or pesticide exposure during the Vietnam War. There are currently about 15 specific diseases that are “presumed” to be connected and if one can prove they served in Vietnam, then disability benefits for veteran and (after death) spouse/children are pretty much automatically granted if a claim is filed. There are reports that another three are being considered with the caution that they will drastically make the costs to the VA far higher than currently exist.

None of these diseases include kidney cancer while prostate and bladder cancer are listed. Lung cancer is also covered with some types excluded, but renal cell cancer that has spread to the lungs is not listed.

While researching the reasoning behind which diseases are listed and which ones are not, I have discovered that there is only one study relating to “Agent Orange” as a possible cause of kidney cancer, and it was completed about 8 years ago at the Shreveport, LA, VA Medical Center. Their conclusions were that more study is needed because the study only included 297 veterans. Only the Louisiana VA location was included. It seems like in eight years some additional studies would have expanded the universe of veterans to any number of other VA facilities thereby creating a definitive answer on any connection to AO.

Additionally, I have discovered material connecting pesticides containing some of the same ingredients as AO with kidney cancer with several of studies listed on a hald-dozen websites. Does it make you wonder about the motivations of the VA when these studies are not making the obvious connection in their mind simply because the popular knickname (AO) is not mentioned in the studies This appears to be an increasingly common affliction among veterans.

Based on the disease not being listed on the presumption list, veterans must jump through several hoops that are often time-consuming, expensive, or technically difficult to get past.

Generally, claims are routinely denied on first application. The appeal process can take as many as five years or more to get through. During that time, the veterans live in limbo, not knowing if they will succeed in their quest for compensation or whether their widow will be helped if they don’t make it through the process before succumbing to their illness.

As it turns out, Agent Orange was used on all the base perimeters and often used to clear weeds in areas used for recreation as well as the bomb dumps at several locations.

Currently, veterans must provide proof that they were exposed unless they were assigned Security Police duties along the perimeter of the bases. I slept in a two-story screened barracks that was less than 100 feet from the perimeter fence, but that, alone, would not make me eligible as “exposed”. I would have to provide evidence, including documentation that I was assigned to a specific building for housing.

Assuming one can prove exposure to AO, then the real fun begins. The fifty-two most recent Appeals Board rulings in cases involving kidney cancer produced only eight approvals for benefits. The rest were denied based on a “less/more likely than not” evaluation of documentation from doctors within the VA or private doctors hired by the veteran.

In every case I found in that group, the VA doctors expressed the opinion that because of inadequate studies, it was less likely than not that the kidney cancer was caused by exposure. Virtually all of the private doctors who took the time to define the basis of their beliefs stated that it was more likely than not that the exposure to AO was the cause of the cancer. Funny how that works. In the case of evidence evenly split between favorable and unfavorable to the veteran, the tie goes to the vet. This was, in five of the eight, the only reason they were granted relief.

So, now you see the problem and why I believe it is completely unfair that the VA panel, which determines these things, have not commissioned more studies given the numbers I have seen suffering from this cancer. I also find if difficult to believe that virtually all the surrounding organs in the human body can get cancer from that stuff but the kidneys can’t.

Here’s where you can help!

I have established a petition on Whitehouse.gov asking that consideration be given to including renal cell carcinoma on the list of presumed diseases. If you want to help this effort along, go there and sign the petition. We need 10,000 signatures by August 29, 2017. Given the reach of Politichicks.com, this should not be an unsurmountable obstacle. There are a lot of loyal veterans who have been suffering with the system way too long. Many already died without benefits.

The second motivation behind my efforts here and in other ways is to have the struggle we are all faced with mean something more than just one individual against the system. I want to do what I can to see that others don’t have to deal with a system that does not make it easy.

Is Tolerance a Sin?