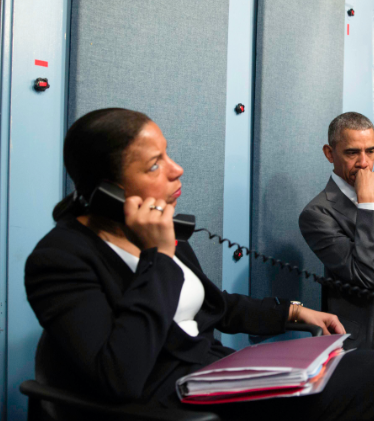 From One America News Network:

Susan Rice may get to keep her security clearance for now according to a letter sent to the former Obama official by NSC Director H.R. McMaster.

The letter surfaced in the past week, but according to the Daily Caller’s Richard Pollock that does not mean Rice is out of the woods just yet.

Pollock says new calls are being made for the Justice Department to launch a criminal investigation into the “unmasking” scandal involving four former top Obama officials.

Pollock says such calls are beginning to ripple through Washington.

The former high profile U.S. Attorney Joe DiGenova has asked for a criminal investigation and a grand jury to be empaneled. A number of other intelligence officials from the CIA and the National Security Council are also making similar requests according to Pollock. This comes after a fourth “person” of interest in the unmasking scandal was identified.

The House of Representatives Chairman for the Intelligence Committee Congressman Devin Nunes sent his fourth request to the national security agency saying that they want to look at a fourth Obama official who apparently unmasked Trump campaign officials and transition officials.

DiGenova says that this latest revelation demands a federal criminal investigation with a grand jury and subpoenas.

Even before the election, there were calls for both Hillary Clinton and Susan Rice to lose their security clearances over the different abuses they took while in office.

Pollock says that allowing Rice to keep her security clearance is “really a serious problem and is quite shocking actually.”

The decision to do so have some in Washington questioning McMaster’s loyalty to the president and his agenda.

However, Pollock added that despite a delay on any investigation that Rice, Rhodes, along with the former CIA director and former director of National Intelligence in the Obama Administration could still perhaps be facing serious consequences.

“It’s very clear that under the FISA Act, Foreign Intelligence Act and under the Espionage Act that there are very serious penalties for people who unmask people and then leak them deliberately to the media for pure political gain. This is really unforgivable and it’s indefensible in my opinion,” warns Pollock.

Is It Racist If Diane Feinstein Asks, 'Who Will Pick the Fruit?'

Why We Must Embrace the Lessons of Elder Wisdom