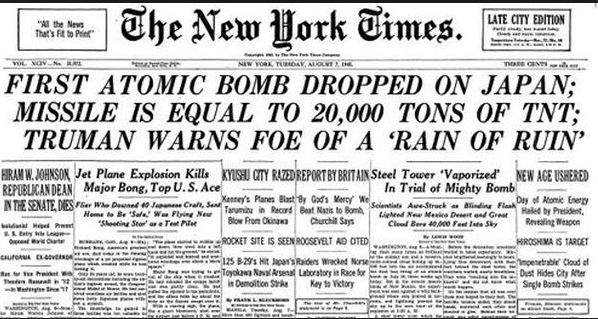 Of all people to remind me that I live in the ‘home of the brave’ the least likely place I expected to hear it from from was CNN. Yet there it was on my phone, a news alert from CNN: ‘62% of Americans, up from 48% in May, say North Korea poses a deep threat to US, finds CNN poll taken before Trump’s “fire and fury” comments Tuesday. This means if I stood in a randomly selected group of 100 Americans, 38 of them would say ‘I’m not worried about a country with nukes threatening us, bring it on!” That is hard core bravery that even General Patton would find inspiring. It’s almost impossible to fathom, but according to CNN we are one tough country to scare.

Since CNN would never interpret anything the President does in a positive light, I assume they disagree with his decision to use strong language against North Korea. Why? I guess Trump hasn’t been told that the world is one big happy place and everyone can be reasoned with and there’s no need to talk nasty, even against people who threaten you.

Many experts have analyzed whether a preemptive strike by the U.S. against North Korea constitutes ‘self-defense’ under U.N. guidelines. Some argue North Korea’s behavior doesn’t constitute justification for the U.S. to strike first.

Ultimately, the decision on whether or not to use force rests with the United States and President Trump. What would happen if North Korea actually initiated a nuclear strike on an American target? Would the world rush to our defense? Is that what is required for us to get a green light from the international community? That’s why our sovereignty is so important. I’d rather we make decisions regarding self-defense than leaving up to others. It’s nice to hold idealistic views and there is nothing wrong with wanting peace and avoiding a nuclear conflict. At the same time, consider the position in which President Trump has been placed. He has three options:

From an historical perspective, President Trump faces a nightmarish dilemma the likes of which only a few Presidents have ever encountered. May God grant him wisdom and guidance. Every choice confronting Trump has serious implications. The only President to ever authorize the use of nuclear weapons was President Truman, who ordered them used against Japan in 1945 to end World War II. At the time he did it, most Americans agreed with his decision. Revisionist historians and leftist liberals, having the benefit of being 70 years removed from that point in history, argue Truman was wrong. Was he? Maybe if we examine Truman’s reasoning it will provide insights into our own situation.

It’s easy to say Japan was ready to surrender and we should have shown them the power of the A-Bomb before using it, but it’s total nonsense. For one, how stupid would you have to be to reveal a secret weapon to the enemy before you use it? If you do that, it isn’t secret anymore and you give the enemy a chance to take measures to minimize its impact. More importantly, Japan did not surrender immediately after we bombed Hiroshima, meaning they saw the full capacity of the weapon and didn’t surrender immediately. After we dropped the second bomb on Nagasaki, we only had one A-Bomb left for immediate use.

If the Japanese had decided keep on fighting, they would have undoubtedly figured that out. Further, the Japanese military had adopted a strict adherence to their interpretation of a Samurai code of known as ‘bushido.’ Central to this concept was the duty to fight to the death. If we had not used A-Bombs to hasten the process, it’s possible that the Japanese military may have deposed of their Emperor, which would have led to continued fighting and completely confused the issue of who possessed the authority on the Japanese side to negotiate a surrender. Finally, some people argued that Truman used overinflated American casualty estimates for an invasion of Japan. If that is there case, then why did the United States produce 500,000 Purple Hearts in anticipation of invading Japan?

Trump, like Truman, now has the thankless task of having to make an unimaginable decision. Since the U.S. Military did not have to invade Japan, we will never know what would have happened if Truman had not used nuclear force. The only relevant fact is that his decision saved American lives. Would Truman’s decision be universally regarded as moral and justified if we had suffered over 50,000 American casualties in a conventional invasion before dropping the bombs? Is moral endorsement from an international perspective worth 50,000 American lives?

Obviously, President Trump and our military have a much better understanding of the situation than the average citizen. I can only pray that we have the technology and intelligence gathering capacity to fully assess the situation and plan an appropriate response. Now is not the time to criticize Trump for responding to North Korea by promising ‘fire and fury unlike any the world has seen before’ should they attack.

For the record, after dropping the first bomb, Truman similarly threatened Japan, telling them to “expect a rain of ruin from the air, the like of which has never been seen on this earth.”

Truman’s decision was based on what he could control. I’m sure Trump’s decision will be based on the same principle. Is it better to strike North Korea first and be wrong or is it better to do nothing and be wrong? The latter mistake is far worse as it means heavy loss of American lives. Ultimately, the decision rests with one man, the Commander in Chief. He was elected by the people and we have to trust his judgment.

We don’t always have the luxury of debating major decisions as it can use up valuable time. Our response rests with Trump. I’m sure he will act in a manner to protect American lives. As long as he acts upon that simple concept, his job is to protect the land of the free and the home of the brave. If ever a situation called for the American public to support their President, it is now.