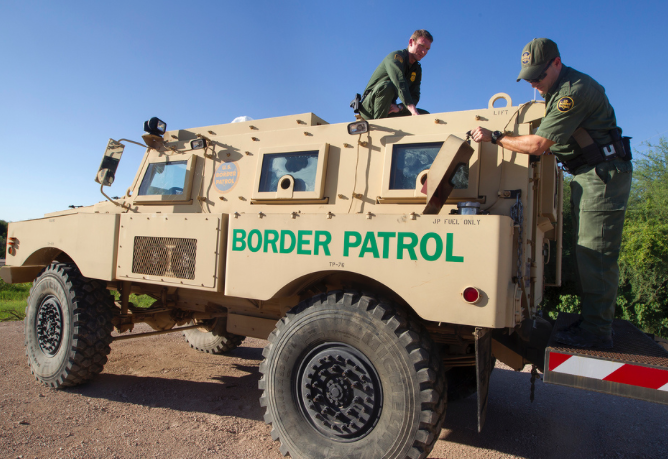 Harris talked about the guarantee President Trump gave to agents about amping up help at our borders. According to Harris this hasn’t happened yet, and an article in LA Times confirmed this on Monday.

“Beginning today, the United States of America gets back control of its borders,” Trump declared at the Jan. 25 ceremony at the Department of Homeland Security, which controls federal immigration agencies.

Seven months later, construction of the wall has yet to begin, the number of Border Patrol officers has actually dropped by 220, and immigration agents are on track to deport 10,000 fewer people this year than in President Obama’s last year in office, the latest figures show.

To be sure, part of Trump’s crackdown is showing dramatic results. Illegal border crossings are down 22% compared with last summer. Arrests of people in the country illegally have surged 43% since January, including longtime residents who bought homes, paid taxes and raised families here.

The sharpest increase in arrests was of undocumented migrants without criminal convictions – 24,189 under Trump, nearly three times as many as Obama in the first seven months of last year.

Immigration and Customs Enforcement officials say the slower pace in deportations — from 240,000 last fiscal year to an expected 230,000 this year — is misleading. Sarah Rodriguez, an ICE spokeswoman, attributed the shift to fewer people being caught and sent back at the border. Removals from inside the country have surged.

But other pledges that Trump made the keystone of his campaign have stalled, or even slid backward, a reflection of the gap between his broad promises and the practical reality of remaking the government’s vast immigration enforcement apparatus.

After the terrorist attacks of 2001, Congress doubled the size of the Border Patrol to more than 20,000 to enhance border security. But hampered by poor morale, hiring problems and high attrition, as well as rampant corruption, the agency hasn’t met that goal since 2013.

Staffing has drifted downward since 2010, and the agency now has about 2,000 vacancies — with 220 fewer agents than when Trump took office, records show.

More importantly, based on current attrition and hiring rates, the agency would need to screen about 750,000 applicants to meet Trump’s goal of hiring 5,000 qualified agents, according to a July report by the inspector general at the Department of Homeland Security.

“They’re going to have a tough time because they hardly have anyone in the pipeline right now,” said Victor M. Manjarrez Jr., a retired Border Patrol supervisor who studies border issues at the University of Texas at El Paso. “They don’t even have enough to cover attrition.”

Linda Jacksta, an assistant commissioner in charge of human resources at Customs and Border Protection, parent agency of the Border Patrol, said officials are determined to reverse that slide. But she said they probably won’t do so before 2018.

The Border Patrol now has a goal of hiring 500 officers next year, she said, and is trying to recruit former military and law enforcement officers to join the ranks.

“It’s a corner that we have been trying to turn for the past two years,” Jacksta said. The low hiring numbers this year “doesn’t really reflect where we’re headed,” she added.

Violent Antifa Protester Says Violence Against Right 'Not a Crime'