It is an image virtually every American has ingrained in their minds, even if they haven’t personally seen it: as you sail in towards the bustling city of New York, one of the first and most distinct sights you see is that of the majestic Statue of Liberty, standing tall with the torch of freedom held above her head and broken chains of tyranny lying at her feet. And if you care to investigate this glorious Colossus of the modern age, there upon the statue itself you will find inscribed the immortal words, meant to uplift and inspire weary immigrants seeking a better life:

“Give me your tired, your poor, your huddled masses yearning to breathe free, the wretched refuse of your teeming shore. Send these, the homeless, tempest-tost to me, I lift my lamp beside the 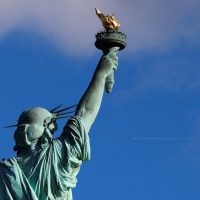 It’s a truly beautiful poem, written in 1883 by Emma Lazarus most famous for writing … with the light-bearing female personification of Liberty, poet of the huddled masses, when she was trying to help raise funds for the pedestal upon which Lady Liberty now stands. Though it would be twenty years after she wrote those words – and seventeen years after the Statue was officially unveiled – before they would be immortalized in a bronze plaque upon the inner wall, in a way they have always been part of that symbol of America. That’s because they speak so well to the spirit of this nation, to its ideals of hard work and personal freedom giving all people the chance to really make it and earn a good life in a way that simply isn’t possible in so much of the rest of the world. The Statue of Liberty – and Lazarus’ words upon her – greet immigrants with a subtle promise of what is possible for them here.

It’s something that really shouldn’t be political, but somehow, that’s what it has become. Because although the Statue of Liberty and the promises of freedom in the US have nothing to do with national security, there are Americans today who have a remarkably loose concern for border control, and they are apt to use Lady Liberty to bizarrely support their position. Yes, this is about the debate over illegal immigration in this country, the criminal activity that sees millions of undocumented, un-vetted people – of wholly unknown intentions – crossing our borders with virtual impunity. One would think that opposition to this would be something else that ought not be political, but it is, and those who support it are fond of pointing to America’s history and tradition of immigration. As if this somehow justifies the wanton violation of our borders.

Nowadays, our current President has also been taking steps to reduce the amount of legal immigration, a move that is widely supported by the American people. Again, this is a matter of national security, as it concerns managing the number and type of people who are allowed into this country. It is not somehow a violation of our principles as inscribed on the Statue of Liberty, and the contention that this inscription precludes us from controlling our borders and obligates us to accept anyone and everyone – in unlimited numbers – into our nation is both absurd and dangerous. The United States does not have the resources to take every last person who wants to come; no country does.

There is a difference between responsibly protecting our borders and turning into a xenophobic recluse of a nation that shuts its doors to all people everywhere. Immigration is not an “either-or” question. We can be welcoming of foreign people, while still caring about our own national security, integrity, and defense.

The statue with the entire poem, becomes a powerful statement, and a true beacon of higher ideals.

A Princeton Scholar, Esther Schor states “the irony is that the statue goes on speaking, even when the tide turns against immigration – even against immigrants themselves, as they adjust to their American lives. You can’t think of the statue without hearing the words Emma Lazarus gave her.” theblaze. The tide hasn’t “turned” against immigration; rather, we welcome those who wish to come here legally. After all, what is it that the Statue of Liberty holds in one hand as her feet break free from her heavy chains? The law.

The poem, in its entirety,

Not like the brazen giant of Greek fame,
With conquering limbs astride from land to land;
Here at our sea-washed, sunset gates shall stand
A mighty woman with a torch, whose flame
Is the imprisoned lightning, and her name
Mother of Exiles. From her beacon-hand
Glows world-wide welcome; her mild eyes command
The air-bridged harbor that twin cities frame.
“Keep ancient lands, your storied pomp!” cries she
With silent lips. “Give me your tired, your poor,
Your huddled masses yearning to breathe free,
The wretched refuse of your teeming shore.
Send these, the homeless, tempest-tost to me,
I lift my lamp beside the golden door!”