There is a word I have grown to detest: Tolerance.

That one word has done more to undermine our traditional values and morals than any other word. As we all well know, the most intolerant people on the face of the earth are those who scream the loudest for “Tolerance”. There is absolutely no respect for honest debate, differing opinions, or strongly held convictions.

We have become a nation of spoiled children who trade insults, resort to name-calling, and cry over “our rights” expecting to get our way-no matter what and no matter who gets hurt.

And, guess what? It’s working. Those politicians and leaders who dare speak out against policies and principles that don’t align with the notion of what is socially “politically correct” know the price they are going to pay: ridicule, humiliation, and rejection. They’re not perfect (who is?) but at least they know what they believe and refuse to back down. They keep pressing on-fighting the good fight. Why? Because they do have strength in their convictions and a strong sense of right and wrong.

Others scurry back into the closet at the first sign of trouble with their mouths taped shut. Why? They have a fear of confrontation, a fear of losing votes, or a fear that it may cost them financially. They have stuffed down their beliefs and convictions to get along for the sake of getting along–out of pure cowardliness. 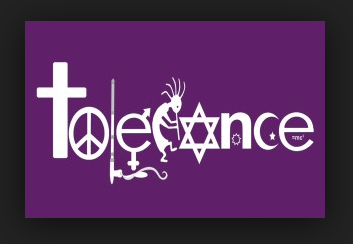 Even more frightening, “tolerance” has become a false doctrine that is sweeping throughout the Church and permeating the souls of believers who lack the courage or knowledge to stand on the foundational truths of God’s Word. It has insidiously twisted the gospel of Christ into a gospel of compromise. Somewhere along the way, Christians began to cherry-pick the Bible to excuse and justify sin. Scared to be labeled as hypocritical, judgmental, bigoted, or politically incorrect, the Church started “winking at sin” to keep from having to confront it. The lines have been blurred and the waters have been muddied- leaving many unable to distinguish between the never-ending screeching of culture and those pure doctrinal truths found only in God’s Living Word. But, as usual, there’s nothing new under the sun.

Believers need to be clear on one point: There is a great chasm between acceptance and approval. We all sin. We all fall short of the glory of God, but here-in lies the difference. True believers know and understand that we live in a fallen world. We understand what it means to “love the sinner but hate the sin”. When believers choose to knowingly give the sins of the unrepentant the rubber-stamp of approval, they are, in effect; declaring that “tolerance” is more important than God’s clear mandates found in His Word. This is not being “judgmental” because we judge ourselves first, confess and repent. It is simply having the courage to not give the appearance of approval to anything that goes contrary to what we know to be true about the character of God.

The following sermon excerpts, preached by Billy Graham in 1959, are still as true today as they were over 50 years ago. [All emphasis mine-LG]

The Sin of Tolerance

One of the pet words of this age is “tolerance.” It is a good word, but we have tried to stretch it over too great an area of life. We have applied it too often where it does not belong. The word “tolerant” means “liberal,” “broad-minded,” “willing to put up with beliefs opposed to one’s convictions,” and “the allowance of something not wholly approved.”

Tolerance, in one sense, implies the compromise of one’s convictions, a yielding of ground upon important issues. Hence, over-tolerance in moral issues has made us soft, flabby and devoid of conviction.

The Way Is Narrow

Jesus Christ, who journeyed from heaven to earth and back to heaven again—who knew the way better than any man who ever lived—said, “Enter ye in at the strait gate: for wide is the gate, and broad is the way, that leadeth to destruction, and many there be which go in thereat: because strait is the gate, and narrow is the way, which leadeth unto life, and few there be that find it” (Matt. 7:13,14).

Jesus was narrow about the way of salvation.

He plainly pointed out that there are two roads in life. One is broad—lacking in faith, convictions, and morals. It is the easy, popular, careless way. It is the way of the crowd, the way of the majority, the way of the world. He said, “Many there be that go in thereat.” But he pointed out that this road, easy though it is, popular though it may be, heavily traveled though it is, leads to destruction. And in loving, compassionate intolerance he says, “Enter ye in at the strait gate … because strait is the gate and narrow is the way which leadeth unto life.”

Christ was so intolerant of man’s lost estate that he left his lofty throne in the heavenlies, took on himself the form of man, suffered at the hands of evil men and died on a cross to purchase our redemption. So serious was man’s plight that he could not look upon it lightly. With the love that was his, he could not be broadminded about a world held captive by its lusts, its appetites and its sins.

Having paid such a price, he could not be tolerant about man’s indifference toward him and the redemption he had wrought. He said, “He that is not with me is against me” (Matt. 12:30). He also said, “He that believeth on the Son hath everlasting life, and he that believeth not the Son shall not see life; but the wrath of God abideth on him” (John 3:36).

He spoke of two roads, two kingdoms, two masters, two rewards, and two eternities. And he said, “Ye cannot serve God and mammon” (Matt. 6:24). We have the power to choose whom we will serve, but the alternative to choosing Christ brings certain destruction. Christ said that the broad, wide, easy, popular way leads to death and destruction. Only the way of the Cross leads home.

The popular, tolerant attitude toward the gospel of Christ is like a man going to watch the Braves and the Dodgers play a baseball game and rooting for both sides. It would be impossible for a man who has no loyalty to a particular team to really get into the game.

Baseball fans are very intolerant in both Milwaukee and Los Angeles. If you would cheer for both sides in Los Angeles or Milwaukee, someone would yell, “Hey, make up your mind who you’re for.”

Christ said, “Ye cannot serve God and mammon … no man can serve two masters” (Matt. 6:24). One of the sins of this age is the sin of broad-mindedness. We need more people who will step out and say unashamedly, “As for me and my house, we will serve the Lord” (Josh. 24:15).

Jesus was intolerant toward hypocrisy.

He pronounced more “woes” on the Pharisees than on any other sect because they were given to outward piety but inward sham. “Woe unto you, Scribes and Pharisees, hypocrites!” He said, “for ye make clean the outside of the cup and of the platter, but within ye are full of extortion and excess” (Matt. 23:25)…Sham’s only reward is everlasting destruction. It is the only sin which has no reward in this life. Robbers have their loot; murderers their revenge; drunkards their stimulation; but the hypocrite has nothing but the contempt of his neighbors and the judgment of God hereafter. That is why Jesus said, “Be not as the hypocrites” (Matt. 6:16).

Jesus was intolerant toward selfishness.

He said, “If any man will come after me, let him deny himself” (Luke 9:23). Self-centeredness is the basic cause of much of our distress in life. Most of us suffer from spiritual near-sightedness. Our interests, our loves, and our energies are too often focused upon ourselves.

Jesus was intolerant of selfishness. He underscored the fact that his disciples were to live outflowingly rather than selfishly. To the rich young ruler he said, “If thou wilt be perfect, go and sell that thou hast, and give to the poor, and thou shalt have treasure in heaven …” (Matt. 19:21). It wasn’t the giving of his goods that Jesus demanded, particularly-but his release from selfishness and its devastating effect on his personality and life.

He was intolerant of selfishness when he said, “For whosoever will save his life shall lose it; and whosoever will lose his life for my sake shall find it” (Matt. 16:25). The “life” which Jesus urges us to lose is the selfishness that lives within us, the old nature of sin that is in conflict with God. So, in your life and mine, “self” must be crucified and Christ enthroned. He was intolerant of any other way, for he knew that selfishness and the Spirit of God cannot exist together.

Jesus was intolerant toward sin.

Christ was “so intolerant of sin that he died on the cross to free men from its power. “For God so loved the world, that he gave his only begotten son, that whosoever believeth in him should not perish, but have everlasting life” (John 3:16). Sin lies at the root of society’s difficulties today. Whatever separates man from God disunites man from man. The world problem will never be solved until the question of sin is settled. But the Cross is God’s answer to sin. To all who will receive the blessed news of salvation through Christ, it forever crosses out and cancels sin’s power…Calvary was a colossal fighting of fire by fire. Christ, taking on himself all of our sins, allowed the fire of sin’s judgment to fall upon him. The area around the Cross has become a place of refuge for all who would escape the judgment of sin. Take your place with him at the Cross; stand by the Cross; yield your life to him who redeemed you on the Cross, and the fire of sin’s judgment can never touch you.

God is intolerant of sin. That intolerance sent his Son to die for us. He has said “that whosoever believeth in him shall not perish.” The clear implication is that those who refuse to believe in Christ shall be eternally lost. Come to him today, while his Spirit deals with your heart!

…and everyone said, “Amen.”

Veteran's Action Alert: How Long Will Veterans Continue to Wait for Help?

It's a Bird, It's a Plane, No, It's Someone to Save the American Way!