Assuming you are a reasonable person willing to scrutinize all information you hear, it should be obvious at this point that MSM is completely biased against President Donald Trump. It was clear during the election that Hilary Clinton was The Candidate of many large and organized special interests. Candidate Trump was portrayed as thoroughly unsuited and unfit for the Nation’s highest office. In poll after poll, all the numbers showed Clinton easily winning the election. The reality however, was much different.

In hindsight, the ultimate result can be traced in large part, to the campaign finances of each 2016 Presidential candidate. While it takes large sums of money to win major elections in this country, the beauty of our electoral system is that you can’t buy an election outright. Money can sway voters, but thankfully free thought still prevails. While this may be an overly simplistic way of looking at it, a person who donates $1 million to your campaign votes just as many times as the person who donates $20 to your campaign. However, the person who donates $1 million will expect something in return whereas the small donor won’t. Those who own and control MSM invested large sums of money in hopes of a Clinton victory.

In perhaps the greatest irony in all of American history, the vast sums of money donated to Clinton may in fact have led to Trump’s victory.

In business, there is a concept called ‘sunk cost.’ It’s a simple principle. Once you have spent money, its spent. Nothing you do afterwards will change that. If a company invests heavily in a doomed research and development project the logical thing to do is write the project off and accept the fact a poor decision was made. It happens, but it’s hard to accept. Therefore, companies will often spend even more money on a failed project in order to justify the money they have already spent on it, acting under the false premise that a success can be salvaged. A lot of money was ‘invested’ in Clinton winning the White House. When the possibility of a Trump victory began to take hold, rather than write-off their large campaign donations to Clinton as a failed investment, MSM spent even more money trying to undermine Trump. Sometimes in politics, any coverage is good coverage, and according to some estimates Trump received billions in free advertising that came in the form of constant media attacks.

The election has been over for 10 months, yet MSM and other interests refuse to accept this fact. If anything, the Trump bashing has only intensified. It has reached the point where it’s very difficult to discern between the legitimate mistakes Trump makes from the phony ‘mistakes’ the media tries to pin on him. The best way to evaluate Trump is to look at the numbers.

First, has the stock market performed better due to Trump’s election? Stock market performance can be measured by indices designed to evaluate market performance as a whole. I used two indices: The Dow Jones Industrial Average (DJIA) and the S&P 500. The S&P 500 is based on a larger sample of companies, but the DJIA has been in use longer. I looked at the cumulative growth rate of the DJIA and the S&P 500 during and after the 2012 and 2016 Presidential Elections. I did two separate graphs to keep it simple.

The Election of 2012 was far tamer than the Election of 2016. It also contained less uncertainty. A sitting President would be re-elected or a conventional GOP candidate would unseat him. The slight dips in both indices in 2012 probably indicate that investors would have been more optimistic had Mitt Romney won, but ultimately the status quo was going to be maintained and the market remained stable. If you compare 2016 to 2012, the indices behaved much differently. Up until the election, the cumulative growth rate for each index in 2016 was well below the growth rates in 2012. Since Clinton was the projected winner up until the day of the election, one could infer that the low growth rates reflected investor pessimism regarding a Clinton Presidency. However, following Donald Trump’s shocking victory, each index showed marked improvement in cumulative growth rate (especially the DJIA). This indicates a positive investor response to a Trump Presidency.

The fact that overall stock market performance has remained high is an indication that despite the way he is portrayed by MSM, the market has remained optimistic for a sustained period of time since Trump’s election. Meaning, investors do not view him as ineffectual and dangerous, but rather, see him as a President capable of guiding our nation’s economy very well. 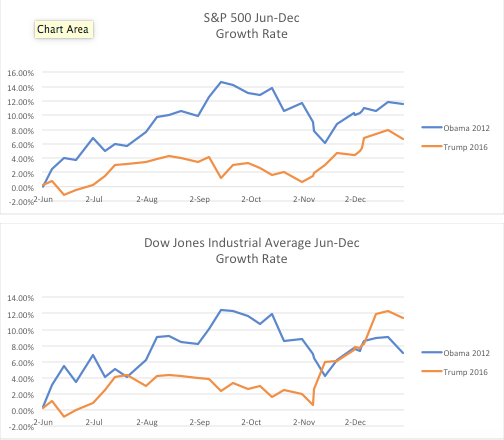 As further evidence that Trump’s victory was directly responsible for an improved stock market growth rate, I took polling data and charted it along with changes in market indices. Essentially, the cumulative growth rates for both indices remained stagnant, but suddenly improved significantly following Trump’s victory.

So which President deserves credit for the increased stock market performance since the 2016 Presidential Election? Did Trump benefit from policies already set in motion by Obama?

It’s hard to make definitive conclusions about the stock market because it can be influenced by an almost infinite number of variables. From a basic standpoint however, it could be said that individual stock prices and the stock market itself are influenced by both actual financial events as well as responses to anticipated future financial events. Emotion also plays a role. From the standpoint of anticipated economic policies, it can be said that the upward trend in the stock market is due to Trump’s election and has nothing to do with Obama.

The U.S. Consumer Sentiment Index is a measure of many factors, but simply put, it represents investor optimism and positive expectations regarding the economy. For purposes of this index, the fact that a fiscal year was split between Obama and Trump is irrelevant. The only thing that is relevant is that consumer sentiment after November of 2016 is a reflection of expectations under Trump as he will be the President for the next 4 years. Even if Obama’s economic policies were completely appropriate, it wouldn’t matter. Consumer sentiment reflects expectations of the future not the past.

The graphs below shows that consumer sentiment was at a low point in October of 2016. Once again, given that the Presidential Election was portrayed as a foregone conclusion and that Clinton would be our next President, this sentiment is a reflection of consumer sentiments towards a Clinton Presidency, which were obviously negative. After Trump’s upset victory, the index went back up and has remained stable. It should also be noted that the consumer sentiment index has been higher under Trump than it was during the last year of Obama’s Presidency. This would seem to indicate that investors have more confidence in Trump than either Clinton or Obama. 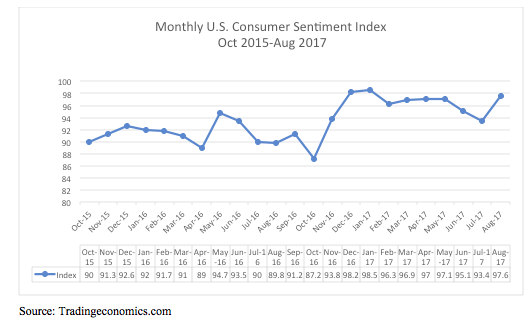 Who gets credit for decreased unemployment rates, Obama or Trump?

In terms of unemployment, it’s too early to judge whether Trump’s economic policies are responsible for a decreased unemployment rate. A President’s policies do not immediately translate into job growth. It can be said that unemployment seemed to be decreasing as Trump took office. Trump definitely hasn’t done anything to reverse the downward trend in unemployment. In fact, as of July 2017, the unemployment rate is 4.3%, the lowest it has been in nearly 2 years.

If you combine the continued decline in unemployment with rising positive consumer sentiment index, all indications point to an expectation that unemployment will continue to decrease under Trump.

Stock markets are driven by information. Quarterly and annual financial statements released by companies whose stock is traded on national exchanges have a direct impact on stock prices. However, no company operates in isolation. The interpretation of financial information is influenced by the current economic and political environment. International developments also play a significant role. Events such as North Korea threatening nuclear war against the United States cause stock market performance to decline because the possibility of nuclear devastation creates investor pessimism. Though some may try, it would be hard to argue that the threats of a madman have anything to do with President Trump.

Different people process information relevant to investing decisions differently. As President, Trumps policies and actions do have a significant impact on the stock market. Things that threaten to undermine Trump’s Presidency also play a large role. So far, Trump has followed through on many of his campaign promises and from an international perspective has acted in the best interests of the United States.

The real problem going forward is the manner in which MSM reports on Trump’s activities. Like anyone, Trump is only human. He isn’t infallible. Unfortunately, MSM magnifies any and all mistakes he makes and is even willing to manufacture controversies for him. Perhaps the only thing MSM does portray accurately is the opposition Trump faces amongst D.C.’s elite, especially members of the Republican party.

At this point it’s very difficult to discern between Trump’s actual mistakes and those unfairly attributed to him. Dangers such as civil unrest will definitely have a negative impact on the stock market and those who fan the flames of such conflict are only harming the economic well-being of the United States. As mentioned, the consumer sentiment index reflects future expectations. If an effort (bogus or not) to impeach Trump gains traction, it will definitely have a negative impact on consumer sentiment as Trump won’t be in Office to carry out his policies. Further, the fact that Trump faces so much opposition within his own party can have a negative impact on the stock market as time progresses because investors will doubt whether he will have the support necessary to implement all of his economic proposals.

In the end, the effectiveness of Trump’s economic policies will be determined by history. I for one believe that history will judge him far more fairly than his contemporaries.

The "Bonds of Love and Loyalty" That Brings Americans Together