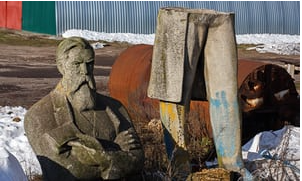 The city with the highest death rate and some of the worst drug and alcohol problems in England is
getting a statue of Friedrich Engels.

A scowling bearded cement statue of Marx’s best friend will fix everything wrong with Manchester.

The statue comes to Manchester courtesy of Phil Collins. That’s not the singer who crooned, “You’ll Be In My Heart”, but the British artist who introduced East German instructors of Marxism-Leninism to Manchester with Marxism Today. Like the more famous Phil, he has his share of love songs, but it’s Marx and Engels, who are in his heart.

Manchester had no statues of Engels. Now thanks to Collins, it will.

The search for the statue started out in the Russian city of Engels: a post-industrial disaster area where unemployment is high and drug smuggling and human trafficking are major industries. The old Communist infrastructure is coming apart. And so on he went to Mala Pereshchepina in the Ukraine.

Mala Pereshchepina had previously been best known for the tomb of Kubrat, founder of Old Great Bulgaria, who had been laid to rest surrounded by golden vessels and jeweled rings. There Phil found a broken cement statue of an old monster and decided to haul the ugly old thing over to Manchester.

There’s always been a market for the art and tchotchkes of fallen totalitarian regimes. There’s a booming market in Nazi and Communist souvenirs. And Collins isn’t the first sympathizers to haul back one of the many Comrade Ozymandias statues that were tossed into the dirt when the Soviet Union fell.

There’s a Lenin statue in Fremont, Seattle. It was bought and shipped over by an English teacher who mortgaged his house to pay for the statue of a mass murderer. It’s been for sale for over twenty years. The current asking price is $250K. So far no capitalist has acquired Lenin as a lawn ornament.

The New York Lenin facing Wall Street hasn’t done any better. On Houston Street, the Red Square building houses a FedEx, a Dunkin’ Donuts, a Sleepy’s and an H&R Block. The building was built by a former NYU professor of “radical sociology”. Then it was bought for $100 million. The Red Square was renamed, Lenin came down and occupies a humbler perch on an eyesore of a tenement.

The icons of Communism don’t hold up well against the march of capitalism.

Being derivative, Phil Collins has to compensate by being twice as loud. The Engels statue will encourage Manchester’s working class to contemplate the “conditions of the working class” today. But Collins seems oddly uninterested in contemplating the condition of the working class in the former Communist countries he passed through while searching for the kitschy junk souvenirs of Marxist tyranny. 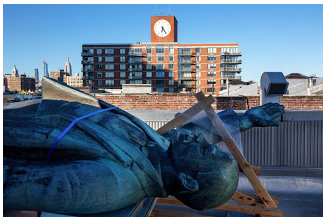 Indeed, the only people whose conditions he seemed interested in had been pushing Marxism-Leninism.

Phil Collins would not have done well under Communism. Just ask the Russian Futurists. What began with a boisterous call to throw the art and literature of the past overboard from the “steamship of modernity” ended with a muffled whimper as the Futurists were forced to adopt Socialist Realism. Collins’ statue is, among other things, a tribute to the Communist suppression of modern art.

The irony of modern art celebrating its own suppression is both heartbreaking and stupefying.

The Engels statue will sit in Tony Wilson Place. Mr. Manchester’s spot has a certain appropriateness and inappropriateness. Wilson was a Socialist who refused to pay for private health care, despite being fairly wealthy. Engels profited from the same misery that he graphically condemned. But none of it matters.

A specter had stalked the streets of Manchester. And it was no longer the specter of Communism. It was Salman howling, “There is no god but Allah and Mohammed is the messenger of Allah”. Forget Marx. In Manchester, it’s Mohammed time. And Islam does not allow any paintings, cartoons or statues of Mo.

Cops raided Abedi’s home in a part of South Manchester where sixteen other Jihadis had operated. Forget Engels, you can tour the home of Abu Qaqa al-Britani, the ISIS propaganda point man who did for the Islamic terror group what Engels had done for the popularization of his left-wing cause. If that doesn’t float your boat, there are the Abdallah brothers, the Halane sisters and Jamal Al-Harith

Friedrich Engels had lived in Moss Side, Manchester. These days Moss Side is best known as a no-go zone in progress. The neighborhood swarms with Muslim migrants. It’s violent and broken. 36% of the population is Christian and 34% Muslim. 12% of the population comes from Somalia or Pakistan.

The Engels house was long since demolished. But Salman Abedi’s home is still standing in Moss Side.

There is a different breed of radicals in Manchester now. Forget the old folks flying the red flag. It’s the black and white flag of the Jihad that counts now. The new radicals of Manchester aren’t fighting for the dictatorship of the proletariat, but the tyranny of Sharia.

The new murderous utopian movement cares nothing for Das Kapital. Its guidebook is the Koran.

Dumping a statue of Engels salvaged from the wreck of Communism into a city on the verge of being wrecked by the left’s enthusiasm for migration is more of a morbid prank than anything else. The left’s nostalgia for its murderous past has blinded it to the reality of the murderous present and future.

Engels viewed the “Mohammedan revolution” as class warfare. The Manifesto of the Communist Party written by Marx and Engels sees their radical movement as the superior inheritors of Islamic fanaticism.

“Islam was unconquerable so long as it trusted in itself alone and saw an enemy in every non-Mohammedan,” they write in its closing message. “From the moment when Islam entered upon the path of compromise and united with the non-Mohammedan, the so-called civilized powers, its conquering power was gone. With Islam it could not have been otherwise. It was not the true world redeeming faith.”

“Socialism, however, is this, and socialism cannot conquer nor redeem the world if it ceases to believe upon itself alone,” they conclude. 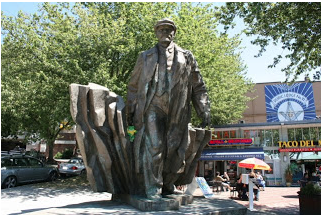 There are many Socialist militants in the UK, but they have made their compromise with Islam.

That’s why Jeremy Corbyn winks and nods at Hamas and Hezbollah. It’s why Phil Collins went to the West Bank. For his Ramallah production, he screened The Battle of Algiers which glamorized the FLN terrorists who desecrated the Great Synagogue in Algiers, planted an FLN flag and scrawled, “Death to the Jews”. The synagogue is now a mosque. Yesterday Algiers, tomorrow Manchester.

Labour meetings in Manchester have been known to be segregated by gender. The police spend more time hunting Islamophobes than fighting Islamic terror. The specter isn’t of Communism, but of Sharia.

The left turned over its mission to Third World radicals who were more Islamic than Socialist, but who had the courage to bomb and kill that the European left no longer did. And then when the Socialism vanished and there was only Islam, the Socialists bowed their heads.

Free Speech and Freedom of Expression Exploded at Politicon 2017