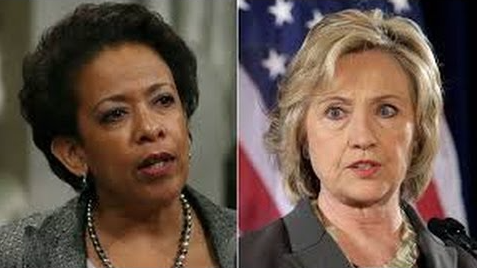 The Department of Justice on Friday released 413 pages of emails related to a controversial private meeting between former President Bill Clinton and then-Attorney General Loretta Lynch during the FBI’s investigation into then-presidential-candidate Hillary Clinton’s Benghazi emails. The FBI said earlier such records did not exist.

This discharge of information is the result of a lawsuit filed against the DOJ by the American Council for Law and Justice (ACLJ) in November 2016.

The newly-released emails mostly include DOJ officials’ conversations with reporters, who were seeking comment on the meeting between Lynch and the former president on an airport tarmac in Phoenix, Ariz. in June 2016.

The encounter raised concerns about the impartiality of the DOJ’s investigation into the Hillary Clinton episode, and became a significant issue in the presidential campaign.

The ACLJ notes that under the leadership of then-Director James Comey the FBI had originally denied the existence of such records.

“No records responsive to your request were located,” FBI Chief of Record/Information David Hardy wrote a letter responding to ACLJ’s Freedom of Information Act request.

“For your information, Congress excluded three discrete categories of law enforcement and national security records from the requirements of the FOIA.”

(Exemptions may apply in cases of classified information relating to foreign policy or national defense, trade secrets, and personnel and medical files.)

ACLJ Executive Director Jordan Sekulow told CNSNews.com that what triggered the lawsuit was the “definitive” answer from the FBI without any requests for an extension, along with silence from the DOJ, the second recipient of the FOIA request.

“This issue only stood out to us at the time that they made the declaration [that the records did not exist], now we know that declaration was wrong,” Sekulow said. “The Comey FBI lied to us.”

Sekulow said he does not believe the discrepancy was due to negligence or an overwhelming workload at the FBI, arguing that if it had been the case, the agency “would not have been responsive at all.”

“This is in direct contravention to the law, and we are preparing further legal action to force the FBI to come clean and turn over all documents related to this matter to us in a timely manner,” he said.

One of those emails, sent by Newman under the subject line “FLAG”, said she wanted to “flag a story that is gaining some traction” about the “casual, unscheduled meeting” between Lynch and President Clinton.

She instructed Quinn to “let me know if you get any questions about this.”

Is It Racist If Diane Feinstein Asks, 'Who Will Pick the Fruit?'