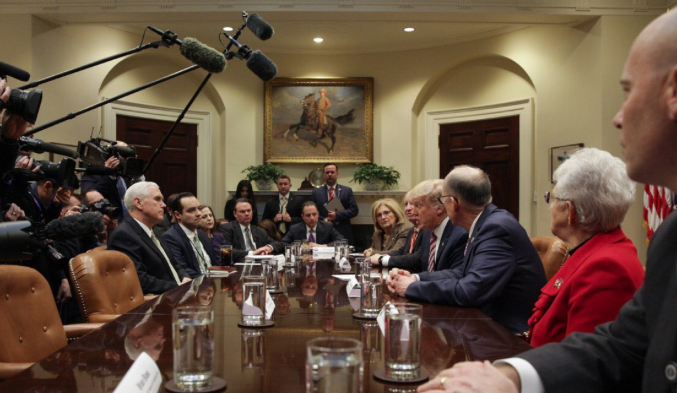 Every day people are hearing the Democrat mantra that if Obamacare is repealed “22 million people” will lose their health insurance.  As a result, many on the left are claiming Republicans are heartless monsters who want to kill people.

But is this true?  Will “22 million people” suddenly be without healthcare in America if the Senate bill passes?

Well, yes and no. According to a new report from USA Today, many of the estimated 22 million are people who were forced to purchase health insurance under Obamacare under threat of paying penalties–including my husband, whose premiums have continuously skyrocketed despite the fact that he is healthy as a horse and has only been to the doctor twice in the 28 years I’ve known him.

The following from USA Today clarifies some of the rumors and myths (aka #FakeNews) floating around out there and, as always, the truth is much more rational:

“To understand God’s thoughts,” Florence Nightingale once said, “we must study statistics, for these are the measure of his purpose.”

Clearly the use of numbers is the easiest way to quantify the effort made to help the less needy, or, conversely, to criticize the absence of such aid. This week, the non-partisan Congressional Budget Office estimated that the new Senate Republican health care bill would leave 22 million more people without health insurance in 2026 than under current law, triggering Democratic predictions of death and destruction throughout the nation.

If last year was the year America started to believe years kill people (“David Bowie and Prince are dead? Damn you, 2016!”), 2017 is the year we start to believe numbers alone could send us to see their duet in heaven.

But to slightly tinker with a famous phrase (attributed to Benjamin Disraeli, Mark Twain and a handful of others), there are “lies, damn lies, statistics and CBO scores.”

Many of the estimated “22 million” people who would “lose” health insurance by 2026 under the Senate plan are people who were forced to purchase it because under Obamacare, they’d have had to pay a penalty if they went without. If policyholders aren’t required to keep a plan they don’t want or can’t afford, they can either continue to keep buying it or choose not to. This is not “losing” health insurance — for instance, if people move from a state that requires auto insurance to one that doesn’t, they aren’t “losing” insurance if they keep their policy active.

Further, as Sen. Ron Johnson, R-Wis., has been pointing out, the CBO used an outdated estimate that’s more than a year old to determine the “loss” of coverage in the individual market from year to year under the Senate plan. When the most recent estimates from January are used, the number of Americans with individual health insurance would remain unchanged between 2017 and 2018. (It is these types of late-breaking revelations that buttressed Johnson’s successful argument to delay a vote on the bill.)

Yet the shadowy “22 million” number still lurks behind Republican lawmakers, threatening to send the entire bill to its grave. Consider the CBO score a pre-existing condition.

It doesn’t help that news reports criminally misrepresent the CBO score, stating flatly that 22 million people will “lose” insurance under the plan. Or when ostensibly neutral news articles announce that Medicaid will be “slashed” or “gutted” under the Senate bill.

In fact, the bill merely slows Medicaid’s rate of growth. Under the Senate plan, federal Medicaid spending would still increase $73 billion by 2026 — and while that’s well below the scheduled amount of spending under Obamacare, conservatives maintain the current law’s trajectory is unsustainable.

Conservatives have quibbled with both the details of the bill and the manner in which it was conceived. But the right’s criticisms have been far more measured than those from the left, which basically amount to, “MAKE PEACE WITH YOUR GOD.”

And so far, the apocalyptic rhetoric has been working. According to a new USA TODAY poll, only 12% of Americans approve of the Senate health bill, or about 5 percentage points more than the number of Americans who believe chocolate milk comes from brown cows. But, of course, this number is also misleading — ask any random respondent what the bill actually does and he or she will likely look at you as if you have just attempted to swallow an entire pineapple.

Summer Reading: "There Goes My Social Life: From Clueless to Conservative" by Stacey Dash

"Non-Devout" Muslims and the Threat They Pose