So what happens when 7 California Tea Party folks visit the office of one of their elected officials, Marc Steinorth, and complain about the new 71 cent gas tax he voted for? First Steinorth seemingly tries to hide and have his assistant speak for him, then dozens of police are called to escort his constituents OUT.

Yes, Arthur C. Shaper (the man in the blue shirt) was loud and perhaps a bit brash, but what he says is true and Californians deserve to hear firsthand why these “Republicans” are continually voting as if they’re Democrats and literally destroying the entire state of California.

As a Californian, the only time I’ve ever seen this many police respond to something is if there is a bank robbery or potential terror attack. They certainly don’t respond this way to the nightly violence happening in places like, say, Skid Row.

“I’m reminded that several months ago a ‘Black Lives Matter’ mob of hundreds of people swarmed the Capitol building in Sacramento and laid on the floors everywhere and blocking the doorways so that no legislators or anyone else could get in or out of their offices – and our wonderful Governor responded by ordering the capitol police to STAND DOWN. Melissa Melendez was one of the trapped legislators and reported it live. So I guess we should not be surprised that Steinworth, now officially a darling of SEIU and the Sac Dems, is merely following the SOP of the Left.”

Perhaps if the Tea Party protesters had covered their faces with MASKS and threatened violence (ala Democrat ANTIFA, or before that Democrat-created KKK) everything would’ve been copacetic…

Is this a sign of things to come across the country?

Meanwhile this happened at Chad Mayes’ office, another CA GOP Assemblyman who voted for the hike and more.  (Note: The word “cheater” is referring to allegations that Chad Mayes was caught cheating on his wife…) 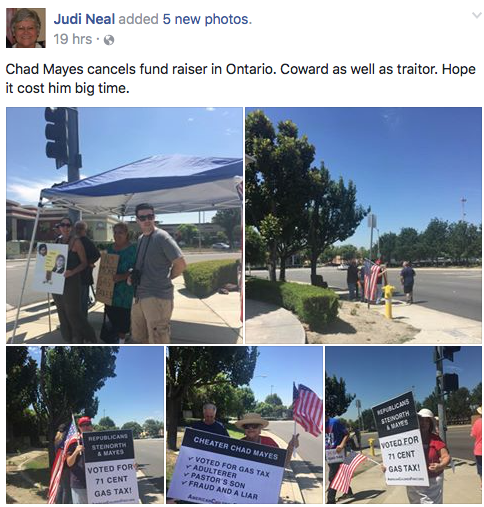 BREAKING: Preibus OUT, General IN As Chief of Staff