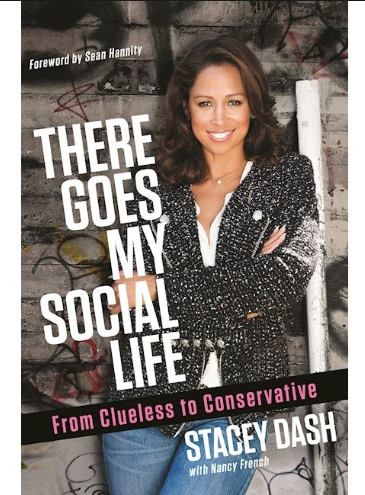 There Goes My Social Life: From Clueless to Conservative is the story of American Actress, Stacey Dash. Dash has fought the odds her whole life. She grew up the daughter of two parents who were addicted to hard drugs. Dash has never “fit the mold,” she has never conformed to what she was supposed to be, according to society’s standards.

In the same way her co-star role in the movie Clueless and her role in the later spin-off TV series of the same name, launched her acting career, one little tweet supporting the Romney/Ryan ticket when Romney ran for President against Obama, launched her into political stardom. Prior to Clueless, Dash had bit parts in The Cosby Show, and other roles in 1988 she was cast in TV 101, where she was a co-star with Matt LeBlanc (LeBlanc would later be launched into stardom for his role as Joey, on Friends). Unlike the other actors in Clueless, Dash was twenty-seven year old, single mom with a five year old son, playing the role of a high school student.

After a lifetime of failed relationships and marriages, which Dash details in her book, Dash decided to surrender her life to the Lord completely. Dash had been Catholic for years, but hadn’t really allowed the Lord to direct her life. “We are living in a unique cultural moment…That’s why we must dig our feet into the ground and make the decision to believe in God’s truth, not the culture’s lies…Now is the exact time that Americans need to choose correctly. I was finally ready to try. ‘Okay, God, I give up,’ I cried. ‘I surrender. Let’s do it Your way from now on.’”

Dash didn’t grow up conservative, far from it. No one taught her to support republican values, she supports republican values of capitalism, etc., because they make sense to her. She doesn’t support these values because she’s “supposed to” in fact quite the opposite. Being half black, half Mexican, she isn’t “supposed to support Republican values”. Dash says in her book that she was “blacked into voting for Obama” the first time around. When Dash sent out that first tweet in support of the Romney ticket, she was mercilessly attacked as a person and a woman. Because Dash is both a woman and an ethnic minority she isn’t “supposed to support republican values or candidates.” But Dash has never been one to fit the mold. Furthermore Dash didn’t even know she was supporting conservative values, from capitalism, to the myth of the gender wage gap, Dash held conservative beliefs unbeknownst to her. “Now that I realized I was a conservative-and had been all along-I started paying more attention to politics.” Dash was infuriated by how the Democratic Party made everything about race, and how they put ethnic minorities such as herself into a democratic box, and if you didn’t fit in the box then, they destroyed you, or at least they tried. But it is because of Dash’s refusal to conform that we know her as for more than the girl from Clueless.

We’ve seen her on the Fox’s OutNumbered couch, Piers Morgan, on many other news shows, because she refuses to fit in the box: “When I gave myself fully to God, things began happening that I never would have ever expected. Miraculous things.” Dash had the courage to speak out, and that is what she hopes her book empowers every American to do, speak their mind.

Will "22 Million People" Lose Their Health Insurance if the Senate Health Bill Passes?