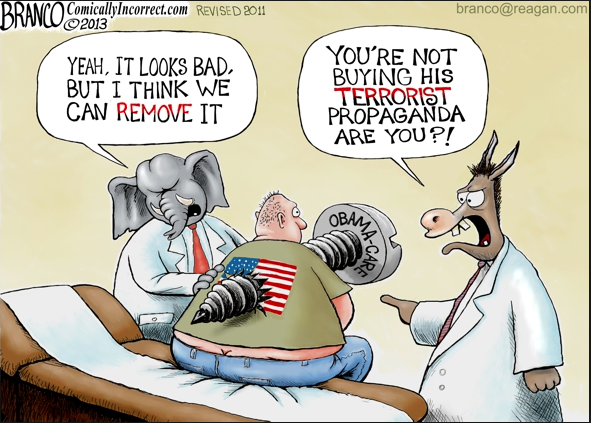 The biggest fallacy in our world today is that people are obsessed with the idea that there are clear answers to all of our problems. To them, the only thing standing in the way of achieving high-minded altruistic goals are people who don’t share their views. They look at the world from the naïve perspective that all injustices can be corrected and that there are people who can be trusted to implement the solutions. Further, those who are prosperous should feel guilt over their success. Guilt is very pervasive in the mindset of many Americans. That is why we hear terms such as ‘income inequality.’

The inevitable outcome of such thinking is a socialist mindset, and the support of socialized medicine is proof of this. What could possibly go wrong with that? Plenty.

Often I find myself seeing a nurse practitioner as opposed to a doctor. Not by choice; it’s usually all that’s available. A few months ago I was prescribed medicine for a cold that conflicted with medicine I was already taking despite the nurse practitioner having a list of all my medications. Fortunately my pharmacist caught the error. I often see doctors typing into a computer any symptoms I am describing. I find this disconcerting. Technology is great but it’s no substitute for human judgment and intuition. Old-school doctors don’t do that. They rely on their experience and gut instinct, not instructions from a computer. My general practitioner, a doctor I highly respected, retired because he became fed up with all the bureaucracy imposed upon him. In general, I don’t feel the quality of health care has improved over the years, something we undoubtedly owe to government interference.

However, my primary overriding concern regarding socialized medicine is the horrifying possibility that it will become a situation where the government or the courts decide who lives and who dies…who is obsolete and who isn’t. Is that what we want? Where does it go from there? Do we want a government capable of mandating the abortion of all children with Downs Syndrome, or babies born prematurely? Then what? Anyone over the age of 60 being denied any and all health care? For all I know, this scenario is already playing out to some extent even in the U.S., but the worst specific example I have heard is the Charlie Gard case in the U.K. Charlie is a 10 month old baby who suffers from Mitochondrial DNA depletion. It is a highly rare disease that causes damage to vital organs, especially the brain. The courts in the U.K. and Europe have taken the decision regarding any further treatment for Charlie out of the hands of his parents.

As of now, the courts are treating the hospital that is caring for Charlie and providing him life support as though they are the child’s guardians, not his parents. The hospital has argued that Charlie’s condition is beyond all hope and that it is needless to prolong his life. His parents on the other hand vehemently disagree. There is an American doctor at Columbia University who believes Charlie may benefit from experimental treatment. Charlie’s parents have raised over a million dollars to cover expenses. The only thing stopping them are the courts.

No one who is a normal parent can read about this case and not feel outrage. Who has the right to decide this child’s fate other than his parents? The pictures of the parents leaving court after yet another adverse decision are profound and heartbreaking. There are rational ways to look at things and irrational ways to look at things. If you are a parent and there is even the slimmest of hopes you can save your child, you jump at it. I don’t think these parents are acting irrationally. There is a doctor who has proposed an experimental treatment. I have heard no evidence that he is a charlatan offering an overly optimistic and unrealistic solution. I also don’t believe the parents are under the impression that this treatment is guaranteed to save their child. The fact is that they are dealing with a rare disease, meaning there aren’t a lot of answers and a lot of unknowns.

At this point what is there to lose? From the standpoint of a parent, what odds do you put on something like this? A million to one? A billion to one? A trillion to one? The answer is you don’t factor in any of that. If there is an any possible way to save your child, you do it. If I were in the place of Charlie’s parents I would be willing to sacrifice everything I had just to give my child this one final chance. No matter what, it would be worth it. To do otherwise would unthinkable. Such decisions should be made by loving parents, not a godless and soulless court or government.

We live in a country where baby parts from abortions have been sold. There are plenty of people walking around who see no moral issues with abortion. The Democratic Party is no longer ‘democratic’ but socialist. People are under the delusion that people such as Elizabeth Warren, Bernie Sanders and the Clintons care about them. Really? What do people think the Clintons do with the millions they make? Hand it over to poor people on the streets? No. These people live the lifestyle of wealth and privilege. That’s what inevitably happens in socialist regimes. Make no mistake. The leaders of such regimes don’t live in poverty and by no means is wealth re-distribution a viable or sensible undertaking. I don’t want to live in a country that wants to ignore God. It don’t want to be told what is or isn’t possible.

There are only 16 known cases of people with the same the genetic disorder as Charlie. From a scientific research perspective I fail to see how they can definitively declare this a hopeless situation because how can they predict what will happen given such a small sample size? If you have a sample size of 10 million people afflicted with a disease, you could make a far better statistical analysis of likely outcomes because you would have 10 million outcomes to study.

However, no matter what the odds or how dire the prognosis we should never forget that there are such things as miracles, which Merriam-Webster defines as ‘an extraordinary event manifesting divine intervention in human affairs.’ As fellow Politichicks contributor Abigail Adams has pointed out, “Believers see the world far differently than non-believers.”

As a Christian, I view the world as a place of possibilities as opposed to seeing it as a world of limitations. Science allows us to understand many things about the world we live in, but it can’t explain everything. Science can’t explain why we have a sense of right and wrong. Science tells us that we and everything around us are the result of random events in the universe, which to me is laughable. It would be the equivalent of a tornado blowing through a rural city and leaving high rise luxury apartments in its wake. There is too much precision in our world for it to be an accident. Everything is God’s Creation. The most important of which is human life.

A physical death awaits us all. It’s never easy to let someone go and there are times when people hold on to any shred of hope when they shouldn’t. All I know is that God made this world and the people in it. He has the final say. People have overcome just about any certain death scenario imaginable. God works miracles every day. It’s sad nobody want to talk about them.

Arizonan Says Kelli Ward is Being Vilified for Speaking the Truth

Prager U History Lesson: Why Did the Democrat South Become Republican?