Throughout much of human history, in most societies, war has been firmly considered a “man’s game”. Though there have certainly been exceptions, in most cases the soldiers, the support staff, and certainly the commanders have been male. These military forces of days gone by (and many that still operate toady) took it for granted that women were too feeble, too emotional, and too weak to handle the rigors of warfare. They needed men to keep them safe, and it was a man’s sacred duty to protect them – never to fight alongside them.

A specialized combat squad currently operating in – of all places – the Middle East is showing up those ancient assertions for the hogwash they’ve always been. This is the Women’s Protection Unit, an all-female fighting force 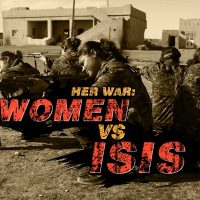 operating in Syria under the Democratic Union Party, which controls most of the northerly Rojava province of that nation. The Women’s Protection Unit is the all-female counterpart of the more traditional male People’s Protection Unit. The group is a bona fide military contingent, boasting some 7,000 soldiers who battle the radical forces of ISIS for control of their homeland.

And battle they do – these combat women are tough as nails. One video leaked from a shootout in Raqqa, Syria shows a sniper in the Women’s Protection Unit aiming for a shot at an ISIS target. Moments after she pulls the trigger, counter fire streaks over her head in the form of a bullet, which pierces the wall behind her and blows dust and plaster into the air. In that situation, the most hardened male soldier could be forgiven for hitting the floor, gasping to the point of hyperventilation, and profusely thanking God he’s still alive. This lady, after ducking for cover, can be heard giggling in the video before sticking her tongue out to mock the enemy’s miss. That’s next-level nerve.

What’s most impressive about the Women’s Protection Unit is the fact that they are an all-volunteer battalion. Not one of them has been conscripted or otherwise compelled to fight; they are there because they believe in what they’re fighting for. And for all their unqualified fearlessness in the heat of battle, it isn’t merely victory against ISIS that they crave. They have other, more political goals in mind.

The Women’s Protection Unit wants equality for women in society, and as shocking and unlikely as this aspiration may seem in their part of the world, they are succeeding. In their Kurdish haven of Rojava, they live in a society where education – forbidden to young girls in some parts of the Middle East – is compulsory for female children between the ages of 7 and 15, without restriction based on race or class. There is even a university in which everyone, regardless of gender, is welcome. Government is rooted in equality, too, with a cooperative system of rule in which a man and a woman share power at each level of administration.

It’s nothing short of amazing and downright inspiring that something like the Women’s Protection Unit (and the society they so bravely fight and sacrifice to defend) can exist in a place like the Middle East, which so often has a regrettable stance on women’s rights. It emphasizes the courage and toughness of these women all the more, that in a region of the world where people of their gender can sometimes have acid thrown in their face for wearing the wrong clothes, they are willing to take up arms and protect their right to be seen and treated as equals, not hidden under veils, and behind walls. They deserve far more notoriety and recognition than they’ve been given – everyone should know who the Women’s Protection Unit are and what they are striving to build and preserve- their nation.

Should A Gun Be Allowed in a Teacher's Desk?