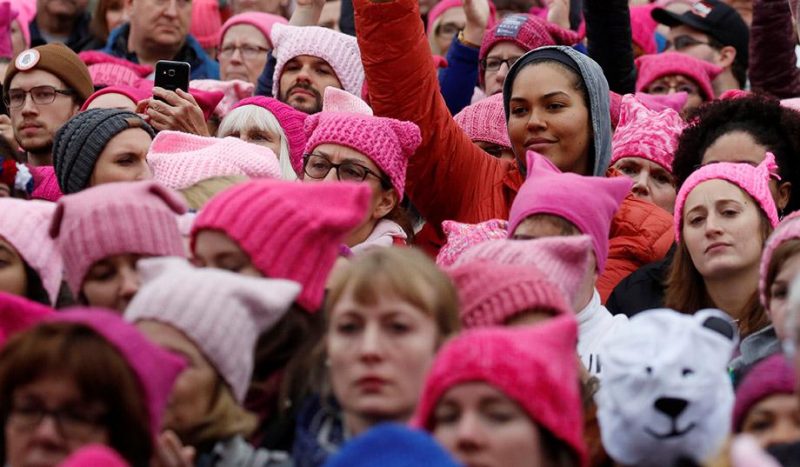 This was the 1970’s female mantra followed by the infamous “hear me roar!” –which was originally a song written by Australian-American artist Helen Reddy.

The composition of the song sprung from Reddy’s desire to express her growing passion for female empowerment.

To her credit, Reddy had genuine contempt for men who belittle women, especially in the workplace. When I was nineteen, I was fired from my job for refusing to sleep with my boss. I get that, some guys are just plain jerks. I won’t even defend their jackassery.

Although I now criticize the modern-day feminist movement, I used to be an intricate part of it in my own right. I was all things pro-woman, pro-choice, equal rights, voting rights, you know the whole spiel. Some of it was for a great cause and some of it wasn’t at all. But a woman in my twenties, I bought into the entire feminist movement–hook, line and sinker. Until one day, I woke up and realized that the movement doesn’t really stand for anything valuable anymore.

Today, feminists march around in their pink vulgar hats, squealing about how they ‘want to blow up the White House,’ and they complain about the Western ‘social construct’ that somehow continues to keep women downtrodden. In reality, women born in the United States today are some of the most liberated women on Earth. Sadly, feminists are too blinded by their own ‘victimhood’ to see it… even though it is right there in front of them.

Yet, there are indeed FIVE battles in which I believe feminists should be fighting…but they aren’t:

1. The slaughter of other women. Approximately 1,000 women are murdered every single day. In abortion clinics. Sometimes, their organs are even sold for a profit. You’d think feminists would be outraged by this. Instead, they celebrate. It’s totally mind boggling.

In fact, legalization and cultural acceptance of mass infanticide is feminism’s crowning achievement.

Planned Parenthood has become the Temple of Baal where human sacrifices are made and it’s now all perfectly legal. It’s no coincidence that our Western culture has been in complete moral collapse since abortion has been legalized. The Judeo-Christian values that shaped our civilization have almost been entirely erased in just a few decades of Roe vs. Wade. And feminists are very proud of that.

Abby Johnson was once clinic director for Planned Parenthood, but she was so disturbed by what she saw at the abortion clinic that she became an anti-abortion activist. In the following video, she shares her story with Tucker Carlson:

There is no other industry that has such a dramatic impact on human behavior.

And while many feminists have condemned pornography as a form of violence against women (which it is), other feminists shockingly embrace some forms of pornography as a medium of feminist expression. We would think that all feminists would agree that pornography is demeaning and abusive to women. Apparently not.

3.Transgender Insanity. Last month, a transgender MALE came in first place in a FEMALE competition. Andraya Yearwood, a freshman at Cromwell High School, placed first in the girls’ 100-meter and 200-meter dash finals against girls from other schools in the region, according to Turtleboy Sports. Ironically, his time would have earned him last place in both boys’ competitions.

But ladies, get used to it, this is the new norm where we may never be able to win another athletic competition again as long as biological men are allowed to participate in our sports.

In reality, modern-day feminists are watching as their movement suffers devastating blows, not at the hands of Donald Trump, the Republican party, or even Conservative Christians…, but rather at the hands of men wearing makeup and dresses. Yep, men are now working their way into female ranks and beating women at being women.

As author and Blogger Matt Walsh writes in his new book, The Unholy Trinity:

“For years, feminists have contended that they can do everything as well as men can. Today, they must sit quietly while the gay lobby explains that, on the contrary, they can’t even be women as well as men can. The mainstream acceptance of radical feminist theory has been, up until this point, one of liberalism’s greatest achievements. And now it’s all compromised for the sake of a population that barely exists.”

What’s worse, is that the transgender insanity has opened Pandora’s box for perverts and predators to pee in restrooms right next to our ten-year old daughters. I was in shock the other day to hear some friends of ours express their ambivalence to that particular situation. But then again, they don’t have ten-year-old daughters to worry about like we do. Either way, the feminist movement that is supposedly “pro-woman” doesn’t seem to care that men have invaded their bathrooms.

4. Oppression of women in the Middle East. I just finished reading Nonie Darwish’s new book called “Wholly Different,” which eloquently explains the differences between Christian values and Islamic values. Darwish would know as she grew up in the Muslim country of Egypt where her father was a jihadist who was killed when she was only eight-years-old. She later moved to the United States and converted to the Christian faith (a very courageous act in itself given the consequences). After reading her book, I feel so blessed to be a female born in the United States–where women are the FREEST and most LIBERATED in the entire world!

I know there has been a lot of screaming (from the modern-day feminist movement) about how our “Christian patriarchal society has been so unfair to women!”–Perhaps, that may be true in some instances. But from her personal experience, Darwish brilliantly explains how it was Christianity and the Western culture that have truly elevated women to new heights (unlike the oppressive culture in which she grew up).

In fact, when I read Darwish’s first book “Cruel and Usual Punishment” a few years ago, I literally had nightmares about the poor little girls who are forced to undergo female genital mutilation (FGM) in some countries. Women in many other cultures are treated like second-class citizens, like property, are abused, and are sold as sex slaves. They don’t get to enjoy the freedoms that we (women) get to enjoy here in the United States.

So, unless the modern-day feminist movement stands up for REAL oppression that is happening to women in many other parts of the world, it’s difficult for me to take them seriously.

We would think that feminists would declare war on human sex trafficking. Instead, they choose declare jihad on the Trump administration and march to protest Dana Loesch’s NRA ad (which, ironically condemns violence). Why? because those things are easier and require little courage.

Adult women make up the largest group of sex trafficking victims, followed by girl children, although a small percentage of men and boys are trafficked into the sex industry as well.

Sex trafficking is certainly a perfect battle for the feminist movement to fight. But instead, they would rather stage a huge boycott of Ivanka Trump’s clothing line. Why? Again, because it’s much easier for them to do so. Not to mention the fact that their priorities are completely mixed up.

While the feminist movement has indeed advanced the women’s cause in phenomenal ways over the past century, I believe it is now stuck in ‘victim’ mode. And nothing sets a woman back more than seeing herself as a victim. Because she never has to take responsibility for her current situation. It’s always somebody else fault. Hillary Clinton and Kathy Griffin are perfect examples of this–pointing their finger at everybody else for their own stupid choices.

In reality, as American women, the first thing we can do to move our cause forward, is to show gratitude for the blessings our Creator has given us, and just simply be thankful that we live in a nation that secures these rights for each one of us.

Then we can discern the battles laid out before us that are truly worthy of fighting.

Canada: Sharia Fine for Not Removing Shoes Where Muslims Prayed

Karen Vaughn: Do You Worry About Your Kid’s Friends?