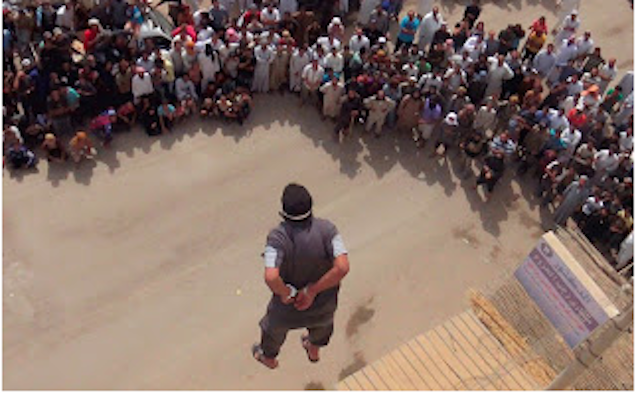 ISIS has been defeated. That’s the official word out of Iraq. But don’t count it out just yet.

We beat ISIS twice before. Once in its previous incarnation as Al Qaeda in Iraq and in its even earlier incarnation as Saddam Hussein’s regime whose Sunni Baathists went on to play a crucial role in ISIS.

Each time it was reborn as another murderous monstrosity.

We don’t know what the next incarnation will look like, but considering Saddam Hussein’s rape rooms, Al Qaeda in Iraq’s love of suicide bombings and ISIS taking public torture to a new level, it will be bad.

Islamic terrorists are not a “tiny minority of extremists” who “pervert Islam”. They are Islam.

ISIS keeps coming back because it’s rooted in the local Sunni Islamic Arab population and the religion of Islam. The Sunni link is why ISIS keeps popping back up. Bush suppressed Al Qaeda in Iraq by allying with Sunni tribes. Obama made a deal with Iran and let its Shiites dominate Iraq. Sunnis flocked to ISIS’ ex-Baathists who promised to bring back the good old days of Saddam’s supremacy for Sunnis.

As long as the Sunni-Shiite tensions in Iraq and Syria, not to mention those between Arabs, Kurds and Turkmen continue to play out, ISIS will stick around in some form waiting to make a comeback. The cycle of Sunnis turning to Al Qaeda/ISIS to beat the Shiites and then to the US to beat ISIS will continue.

Critics who accuse the US of creating ISIS by bombing Iraq miss the point. ISIS is the latest embodiment of Sunni supremacism and historical nostalgia for the Abbasid Caliphate. Both Saddam and the Caliph of ISIS capitalized on that nostalgia the way that Hitler did on Charlemagne. We didn’t create it. And it isn’t going anywhere. We can’t defeat it without breaking the historical aspirations of the Sunni population. That is what we are up against.

We’re not just fighting a bunch of ragged terrorists. We’re fighting against the sense of manifest destiny of a large Muslim population, not just in Iraq and Syria, but in London, Paris and every state in America.

The Islamic terrorist groups of the Middle East are especially dangerous because, as ISIS did with its Caliphate, they can closely link themselves to crucial epochs in Islam. Al Qaeda leveraged its Saudi face to form a visceral connection with Muslims worldwide. ISIS repeated the same trick with its Iraqi link. And large numbers of non-Arabs and converts to Islam rallied from around the world to the Jihad. ISIS is now the new Al Qaeda. It may not be able to run Mosul, but it has become an international terrorist organization that is even more dangerous than Al Qaeda. And that may be what it wanted.

Like the Palestinian Authority, Hamas and other Islamic terrorist groups, the Islamic State was never very good at running things. The PA won’t make peace with Israel for the same reason that Hamas won’t make peace with the PA: statehood is a compelling imperative, but requires hard work in reality. It’s much easier to send off a few useful idiots to blow themselves up and then collect the Qatari checks.

Civilizations manage societies. Barbarians have more fun destroying things than taking out the garbage or cleaning the streets. That is why ISIS lost and why the Jihad will finally succeed only if civilization implodes too badly to resist its incursions or through the unstoppable force of brute demographics.

The original Islamic conquests wrecked the societies and cultures they overran the way that barbarians always do. They wouldn’t have succeeded if civilization had not been in a state of collapse. Today’s Islamic conquests are a similar reaction to our civilizational decline. But as long as we can send jets and drones to wreak havoc on Islamic terrorists anywhere in the world, the conquests can only work on a demographic, not a military level. ISIS claimed that it could win a military showdown: it was wrong.

But the demographic conquest is going very well. Just ask the frightened natives of Paris and London. The Muslim Brotherhood’s strategy of political and demographic invasion, sneered at by ISIS, may be less glamorous, but it has equally close echoes in Mohammed’s tactics against his non-Muslim foes.

The challenge for Islamic terrorists is turning that demographic growth into military strength. ISIS emerged as the Uber of Islamic terrorism by unlocking the key to turning Muslims anywhere into terrorists with no training or recruitment. While Al Qaeda had pioneered the strategy, ISIS made it work.

Dismissing the terrorists who have been killing for ISIS in the West as “lone wolves” misses the point.

The Islamic terrorist who goes on a stabbing spree in London or a shooting spree in Orlando is no more a “lone wolf” than an Uber driver who picks up a passenger is just some random eccentric. They’re parts of a distributed network that is deliberately decentralized to better fulfill its central purpose.

CVE and other efforts to tackle “online extremism” fight messaging wars that ignore the demographics. But our targeted strikes on ISIS ignore demographics in the same way. We keep looking at the trees while missing the forest. But the forest is where the trees come from. Muslim terrorists emerge from an Islamic population. They aren’t aberrations. Instead they represent its religious and historic aspirations.

ISIS and Islamic terrorists aren’t going anywhere. Defeating them through patronizing lectures about the peacefulness of Islam, as Obama’s CVE policy proposed to do, was a futile farce. Bombing them temporarily suppresses them as an organized military force, but not their religious and cultural origins.

As long as we go on seeing Islamic terrorism as an aberration that has no connection to the history and religion of Islam, our efforts to defeat it will be pinpricks that treat the symptoms, but not the problem.

Only when we recognize that Islamic terrorism is Islam, that the crimes of ISIS and countless others dating back to Mohammed were committed to achieve the goals of the Islamic population, will we be ready to face the war that we’re in and to defend ourselves against what is to come not just in Iraq or Afghanistan, but in America, Australia, Canada, Europe, India, Israel and everywhere else.

We are not fighting a handful of Islamic terrorists. We are standing in the path of the manifest destiny of Islam. Either that manifest destiny will break against us, as it did at the Gates of Vienna, or it will break us. The attacks were once yearly. Now they are monthly. Soon they will become daily.

Every attack is a pebble in an avalanche. A pebble falls in Brussels, in Fresno, in Dusseldorf, in New York, in Munich, in London, in Garland, in Paris, in Jerusalem, in Mumbai, in Boston and in more places than anyone can count. We are too close to the bloodshed to see the big picture. We only see the smoke and hear the screams. We see the boats bringing armies into Europe. We see refugees fill our airports.

The Islamic State is not going anywhere. It’s not a name. It’s an Islamic imperative. And it’s here.

If Congress Will Not Reform the Federal Government, We Should