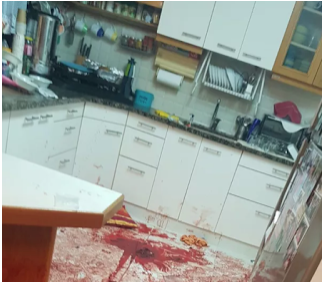 Chaya Salomon was murdered at a Sabbath dinner with her family. The 46-year-old Jewish woman was stabbed to death alongside her 70-year-old father Yosef and her 36-year-old brother Elad.

Photos show the kitchen of the Salomon house in the Israeli village of Neve Tsuf covered in blood. The youngest Salomon daughter had given birth to a new member of the family. The bottle of Glenfiddich on the table was never opened. Instead an Islamic terrorist burst in and stabbed the new grandfather. Tova, the new grandmother was badly wounded. Elad’s wife rushed the children to a safe room.

The smiling terrorist was taken away. He had come armed with a Koran and a knife. “I know that with Allah my dreams will come true,” he had posted on Facebook. “I will go to heaven.”

His dreams coming true have more to do with the Palestinian Authority and American taxpayers. Like all terrorists who kill Israelis, he will be receiving a salary from the PA. And the PA is funded by you and me.

Abbas, the terrorist leader who is Israel’s “peace partner” in the “two-state solution”, touched off this atrocity. Fatah, the organization behind the Palestinian Authority, has repeatedly called for violence. The terrorist’s Facebook message included this plea, “Put in my grave Arafat’s Keffiyah and the ribbon of the Al-Aqsa Brigades”. The Al-Aqsa Martyrs Brigade is the “military wing” of Abbas’ Fatah movement.

Another terrorist attack. More funerals. More calls for restraint by both sides.

There are the formal condemnations before everyone moves on to the business of being pro-Israel. The term “pro-Israel” doesn’t mean much. Anyone and everyone can be pro-Israel.

AIPAC isn’t backing the Taylor Force Act which would cut off taxpayer money to the Palestinian Authority until it stops funding these attacks. J Street, the anti-Israel group which claims to be pro-Israel and also claimed to be “appalled” by the Salomon murders, is lobbying against the Taylor Force Act.

What did this fake pro-Israel posturing amount to when Chaya was being murdered in her own home?

In previous weeks, liberal Jewish clergy fulminated angrily at their more conservative counterparts in Israel over a religious controversy. Daniel Gordis, who makes an excellent living writing “pro-Israel books”, put forward his own version of BDS. Netanyahu and “Israel’s consuls-general in the US should be shunned and disinvited”. Americans should fly Delta and United instead of El-Al. “Meetings with hospitals’ fund-raisers should be canceled. The hospitals did nothing wrong, but when they start running out of money, Israelis will start to care.”

I don’t write to take a position on this issue. Only to note that some “pro-Israel” figures can dig into more reserves of anger when fighting the Jewish “right” than over the murder of Israeli Jews.

It’s easier for even professionally “pro-Israel” figures to rage at Israel than at the murderers of Jews. If only they could feel a fraction of the same anger when looking at the Salomon’s bloody kitchen floor.

Where is Gordis’ call to watch Muslims die in hospitals in Ramallah to make them care? It would be deemed monstrous. “Un-Jewish.” Anyone proposing it would be shunned in “pro-Israel” circles.

If Gordis has a position on cutting off aid to the PA after its murders of Israelis, I have yet to find it.

So much of pro-Israel advocacy consists of meaningless lip service. Israel is an abstraction for many of them. Chaya Salomon was a real person. She bled out on a white kitchen floor on Shabbat.

And so I offer a counterproposal. Instead of being pro-Israel, let’s be pro-Chaya.

Pro-Israel is a meaningless metric. Obama claimed to be pro-Israel while funding the terrorist murder of Jews from the West Bank to Iran. “I am 100 percent pro-Israel,” Bernie Sanders insisted after pushing for an anti-Israel platform, falsely accusing Israel of killing 10,000 “innocent” people in Gaza and putting a BDS activist in charge of his Jewish outreach. If that’s pro-Israel, what exactly is anti-Israel?

It’s easier to understand what it is to be pro-Chaya than to be pro-Israel. If you want to be pro-Chaya, don’t fund her killers. And not just pro-Chaya, but pro-Hallel. Hallel-Yaffa Ariel was a 13-year-old girl who came home from a dance recital and was stabbed to death by a Muslim terrorist in her bedroom. Or pro-Michael. Rabbi Michael Mark was driving home with his wife and children when he was murdered. Or Pro-Taylor. Taylor Force was a veteran of two wars who was stabbed to death in Tel Aviv.

The Taylor Force Act that would cut off aid to the Palestinian Authority if it continues funding terrorism is named after him.

Pro-Israel can cover a multitude of sins. It devolves easily into abstractions. And then we are told that giving money to Islamic terrorists is the pro-Israel position because Israeli security depends on the terrorists keeping the peace. For decades, we have been told that the two-state solution which creates a terrorist state inside Israel is actually pro-Israel. And therefore the destruction of Israel is pro-Israel.

The left is adept at such Orwellian insults to reality. In the same way that bringing Muslim terrorists to America is hailed as patriotic, funding Islamic terrorists and Iran’s nukes become vital to Israel’s security.

And so let’s take a step back from the hall of mirrors. Let’s consider instead what is pro-Sarah.

Sarah will be the next victim of Islamic terrorism. Somewhere she is getting on a bus or cooking dinner for her family. And the next Muslim terrorist, let’s call him Mohammed, is plotting to kill her.

Mohammed has been listening to the calls by Fatah to kill Jews. He has seen crowds cheer the murderer of Chaya, Yosef and Elad. He has been told by the preacher on Palestinian Authority television that if he kills a Jew, he will go to heaven. He sees Fatah’s Facebook message, “If I fall I will not be the first to die, and not the last to die #Rage!” And he knows that he will receive $2,000 a month if he succeeds.

Is it to pour millions more into the war chest of the terrorists so that they can pay Mohammed for her murder? Is it the continuing championing of the Palestinian Islamic State that Mohammed is killing for?

Let us break through the intellectual abstractions because Sarah and Mohammed are real. In a week or two from now, Sarah will be bleeding out on the living room floor while her children scream. Or she will lie dying on the back seat of her car with blood and broken glass surrounding her head. It’s happened before and it will go on happening until the pro-Israel position becomes the pro-Sarah position.

Israel is not an abstract idea. It is a nation of millions of individuals. And these individuals are being killed, one by one, by the genocidal imperative of Islamic Supremacism. If Israel, its geopolitical role, its complex political and religious institutions, its history of thousands of years, its relationship to the Jews of the diaspora is too much to take in, it may be easier to focus on the lives of those individuals.

There is a booming pro-Israel industry. Much of this industry accomplishes very little. It celebrates boosterism and eschews controversy. It seeks a meaningless middle ground. It believes that Israel is morally superior because it continues to strive for peace even at the expense of Israeli terror victims.

There is no pro-Sarah industry. But maybe there ought to be one. And in the future, if we want to determine whether someone is truly pro-Israel, we should ask whether they are pro-Sarah.

Are they for doing whatever it takes to stop her from being murdered tomorrow?

Then we’ll know who is and isn’t pro-Israel. Because pro-Israel will finally mean something.