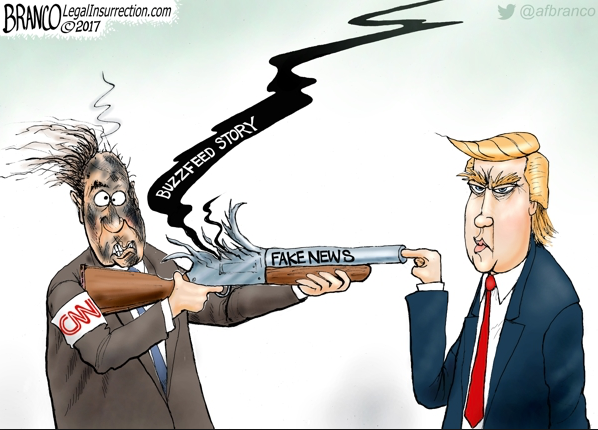 In April, media types were crowing that CNN had brought in Eric Lichtblau who had been, in the Washington Post’s words, at “the forefront of the New York Times’s reporting on the relationship between the Trump presidential campaign and Russia.” It was “an investment in investigative reporting and the sprawling Russia story”. It didn’t take long for the investigative investment to sprawl badly.

Lichtblau has resigned from CNN in a growing scandal over a Fake News story about a Trump associate.

“Eric will guide our coverage and thinking,” Lex Haris, executive editor of CNN Investigates, had boasted. “And when he’s onto a investigation, he’ll still be reporting and writing too.”

Not for long. And Haris has joined Lichtblau on the unemployment line after the Fake News scandal.

CNN Investigates had been announced after President Trump’s inauguration. Its hit pieces had followed the same pattern as the Scaramucci attack that would be its undoing. Go after a personality tipped for a job with the new administration. CNN Investigates had previously targeted Monica Crowley and Sheriff Clarke with plagiarism accusations. But this time around, CNN’s anti-Trump unit had made a big mistake.

Unlike K-File’s petty harassment of Trump associates, the Scaramucci hit piece came from the heavier hitters poached by CNN from mainstream media papers who were supposed to bring down Trump.

The men behind the disaster were no lightweights. Thomas Frank had been nominated for a Pulitzer. Eric Lichtblau had shared a Pulitzer for bashing the Bush administration over, of all things, surveillance. Their names were all over CNN hit pieces trying to tie Trump to an impeachable Russian scandal.

That was what they had been hired for.

CNN claimed that Lichtblau had been “reporting on Comey for more than a decade.” And Frank was busy rolling out fresh grist for the Trump-Russia mill. One Frank article on CNN breathlessly claimed, “One week, three more Trump-Russia connections.” CNN was riding the impeachment train to Moscow.

And yet Lichtblau’s tenure at CNN quickly became troubled. An early June piece denied that Comey had told President Trump that he was not under investigation.

“Comey expected to refute Trump,” was the headline. The headline didn’t hold up. An awkward correction was appended conceding that its premise had been discredited by Comey’s testimony.

The sources were, as usual, anonymous. The Fake News story was full of “a source tells CNN” and “another source said” attributions. Seventeen of them.

The hodgepodge of anonymous sources read like a bizarre fairy tale or mystery novel.

“This source” seemed to be different than “one source.” But what about “another source”? And the “sources”?

This wasn’t journalism, it was gibberish. But building news stories out of conspiratorial insider fairy tales like these had become routine at the big city papers of record. The New York Times got its readership boom with anonymously sourced conspiracy theories just like these. CNN knew what it was getting when it lured Lichtblau in. It wasn’t looking for journalism, but breaking fake news scandal theater.

It was riding the same boom as the Washington Post and the New York Times. As CNN supervising producer John Bonifield admitted in a Project Veritas video, it was about the ratings.

Why Russia? It was a popular conspiracy theory. CNN, like its dead tree competitors, was exploiting the paranoia and anger of the left for big ratings and profits. But it also carried more risk. The Times and the Post had crossed the twilight zone into publishing anonymously sourced conspiracy theories. It had become sufficient to build a link connecting a few people or organizations in the loosest and most casual way possible and then pad that out with anonymously sourced insider gossip about an investigation.

The anonymously sourced insider gossip was the only difference between many of these conspiracy theories at the Times and the Post and any random fringe ravings on leftist blogs. That and the credibility of its authors who could boast a Pulitzer and insider connections that just had to be real.

That was the business that CNN had gotten into with its “investment in investigative reporting and the sprawling Russia story”.

The end came with yet another anonymously sourced gossip hit piece trying to link Anthony Scaramucci, a Trump adviser, with the Russia investigation. The Senate Intelligence Committee investigation referenced in the piece turned out not to exist. CNN’s legal people never cleared the piece. Heads rolled.

Russia stories will now receive extra scrutiny at CNN. Why Russia, rather than Trump? Because CNN has accurately identified Russia as a major failure point in the reporting. Most in the media know very little about Russia. And the reporting isn’t being done by former bureau chiefs in Moscow, but by the usual media types who get their insight from search engines and insider gossip. Loose connections are drawn and then transformed into major stories based on a casual meeting between someone who knows Trump and someone who knows Putin. There’s an endless appetite for such stories on the left, not because of their content, but because they reaffirm the left’s conviction in Trump’s downfall.

No one actually reads through the latest story about how a guy who once shook hands with Trump might have run into a Russian who was once photographed with Vladimir Putin and is now being investigated by the Senate double secret probation committee meeting in someone’s imagination.

They just share it on social media. That’s why the viral hit pieces are popular and profitable.

It’s how the New York Times and the Washington Post found themselves in the black. And why CNN is suddenly in big trouble. The dirty business of conspiracy theories is a dangerous one. It depends on walking a fine line by implying things without saying them out loud or actually stating falsifiable facts.

That’s why Comey madness was so useful. But there was only so much mileage that could be gotten out of him. And as the media turned back to splicing together conspiracies about real people, the bell rang.

CNN’s hit team had made their big mistake with Scaramucci. After all the money spent on buying BuzzFeed’s pranksters and big city paper hitmen like Lichtblau, Trump is the one claiming the scalps.

Conspiracy theories die hard. Fake news is very profitable. But what happened at CNN should be a lesson to the rest of the industry eager to cash in on the irrational fear and loathing of the left.

A few months after the Post’s Eric Wemple had touted CNN’s hire of Lichtblau, he was forced to report on his resignation. CNN has taken a beating. The two titans of anonymously sourced Trump hit pieces, the New York Times and the Washington Post, are next.

Language of the Left is a House of Cards

Pro Wrestling and the Media: More Alike than You Think