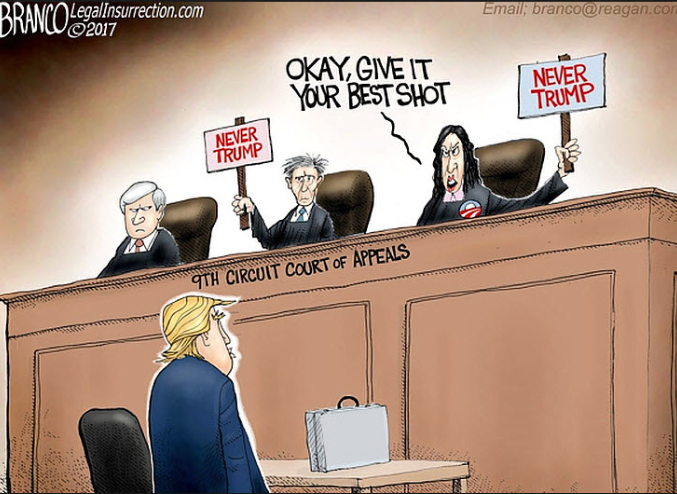 When President Trump tweeted that his measure to protect Americans from Islamic terror was a “travel ban” and that it should never have been watered down, he was right.

Calling it a pause hasn’t appeased a single of the radical judges abusing their authority. It doesn’t matter what the lawyers call it, when courts insist on referencing President Trump’s campaign rhetoric instead. Watering down the ban achieved nothing. The judicial coup can’t be appeased with a “moderate” ban.

Stripping Iraq from the list of countries undermined the effectiveness of the measure considering that the vast majority of refugees being investigated for terror links in this country are Iraqis.

Most of the rest are from the other countries listed on the travel ban.

And the failure to protect Middle Eastern Christians by prioritizing them as refugees is a left-wing war crime. The lawyers, activists, media bosses and judges responsible for it have blood on their hands. Even as they mouth hollow platitudes about compassion, they have become complicit in Islamic genocide.

Waiting on the Supreme Court didn’t work. The temporary compromise measure violated presidential authority while giving the left the room it needed to continue its judicial coup by expanding “prior relationship” to mean anything while unconstitutionally undermining the refugee cap.

There are legitimate debates about the limits of presidential authority in every administration. It’s fair to question whether any president, of any party, should be able to engage in military action without Congress because the Constitution grants the legislative branch the authority to declare war. But there can be no doubt whatsoever that President Trump is acting within his legal authority under the Immigration and Nationality Act which grants him the authority to “suspend the entry of all aliens or any class of aliens as immigrants or nonimmigrants” for as long as he thinks it’s necessary.

Obama made use of this power to temporarily halt Iraqi migration. So have other presidents in the past. Immigration is in the hands of Congress and the White House. It is not up to judges to decide who can come to America.

Our entire system of immigration “discriminates” based on religion and national origin. It allots visas and refugee status based on national origin and membership in persecuted religious groups.

The implications go far beyond the travel ban.

Judge Derrick Watson, an Obama pal, didn’t just go after the ban, but asserted that he had the authority to decide how many refugees should be allowed in. The Supreme Court chose to split the difference there. It’s a short hop and a skip from there to judges deciding that they have the constitutional authority to set the annual number of refugees and immigrants to prevent “discrimination” by the elected branches.

If you want to imagine the end of America, that’s a good place to start.

Federal courts have been unconstitutionally treating states like this for far too long, intervening in everything from elections to prison populations, but now they’re using the general anti-Trump hysteria to assert judicial supremacy over the elected branches of government.

If this judicial coup is allowed to stand, anything that any White House official or member of Congress says at any time in the past, can and will be used by Federal courts to seize control over any policy.

And then we will be living under a permanent reign of judicial terror.

This was the nightmare loophole that opened up when we declared that preventing discrimination was such a compelling interest that it could be used to override nearly everything else. Now the legal butcher’s bill might be coming due. And when it arrives, the Bill of Rights will cease to exist and the elected branches of government will wither under the shadow of black robes and falling gavels.

That is what is at stake here.

President Trump isn’t just defending us against Islamic terror. It’s up to him to defend government of the people against two political coups; one that seeks to reverse the results of the election with a manufactured scandal based on a Hillary conspiracy theory and the other that aspires to make elections irrelevant through a judicial ruling class.

Both Republican presidents had to face off in a civil war against judicial supremacy.

During the Lincoln-Douglas debates, Abraham Lincoln asserted that the decision of the Supreme Court in the Dred Scott case did not suffice to “have the citizen conform his vote to that decision; the member of Congress, his; the President, his use of the veto power”.

Lincoln then quoted Thomas Jefferson’s warning that, “to consider the judges as the ultimate arbiters of all constitutional questions” would be “a very dangerous doctrine indeed, and one which would place us under the despotism of an oligarchy”.

And that is exactly what judicial supremacy has done.

Thomas Jefferson cautioned that judges have “the same passions for party, for power” and “their power is the more dangerous as they are in office for life, and not responsible, as the other functionaries are, to the elective control.”

He stated firmly, “The Constitution has erected no such single tribunal, knowing that, to whatever hands confided, with the corruptions of time and party, its members would become despots. It has more wisely made all the departments co-equal and co-sovereign with themselves.”

Both the first Democratic-Republican and the first Republican presidents rejected judicial supremacy. They did so because it undermined a government of the people and imposed a judicial oligarchy.

What of the first Democrat president? In his veto of the Bank of the United States, President Andrew Jackson affirmed Jefferson’s “co-equal” and “co-sovereign” principle stating that, “the Congress, the Executive and the Court must each for itself be guided by its own opinion of the Constitution.”

Jackson’s portrait now hangs over President Trump in the Oval Office. It is up to Trump to defend Jefferson, Jackson and Lincoln’s understanding of the Constitution against judicial supremacy.

For too long the conservative position has been that we must defend the Constitution from judicial activism by putting the right sort of men on the Supreme Court. This approach has been somewhat successful. But trying to solve the abuse of judicial authority with judicial authority is like plugging a leak with water. Conservatives seek judicial saints who will never overstep the boundaries of their power while the left merely needs to find judges who will have no compunction about abusing their authority.

That is the judicial coup which has placed us in a political stalemate. Conservatives hope that the Supreme Court will follow the Constitution. And if it doesn’t, a whole new “law of the land” appears.

Even if the Supreme Court does the right thing, the challenges won’t end. And the judicial coup will have proven that its members can freeze any presidential policy for the better part of a year while the administration runs a gauntlet of political appointees who deliberately humiliate and undermine it.

And they won’t stop now.

In his inaugural address, President Lincoln opposed judicial supremacy, warning that if government policy for the entire country is “irrevocably fixed by decisions of the Supreme Court… the people will have ceased, to be their own rulers.”

During the Civil War, he rejected a decision by Supreme Court Chief Justice Roger Taney and arrested Judge Richard Bennett Carmichael. Judge William Matthew Merrick, an Associate Justice of the D.C. Circuit Court, was placed under house arrest and had his salary suspended. Merrick, like today’s secessionist Democrat judges had attempted to undermine the war effort through legal obstructionism.

The Civil War should have settled the question of judicial supremacy. But Democrats snuck their judicial fetish through the back door until it has become the greatest threat to our rights and our freedoms.

And it must be defeated again.

Lincoln and Jackson defied judicial supremacy by rejecting its illegitimate authority. President Trump must do the same. The travel ban is within his authority. No serious legal challenge has been made to that authority. It is the legality of his motives that has come under constant attack, but the President of the United States is not obligated to justify his motives to a paternal court to exercise his authority.

By ignoring the courts, President Trump will restore respect for his authority, for the separation of powers and for the power of the people to rule themselves.

And he will be following in the tradition of Jefferson, Lincoln and Jackson.

The majority of Americans support his policy. The law, in both the legislative text and judicial precedent, supports his actions. As the death toll in Europe mounts, they are waiting for him to do the right thing.