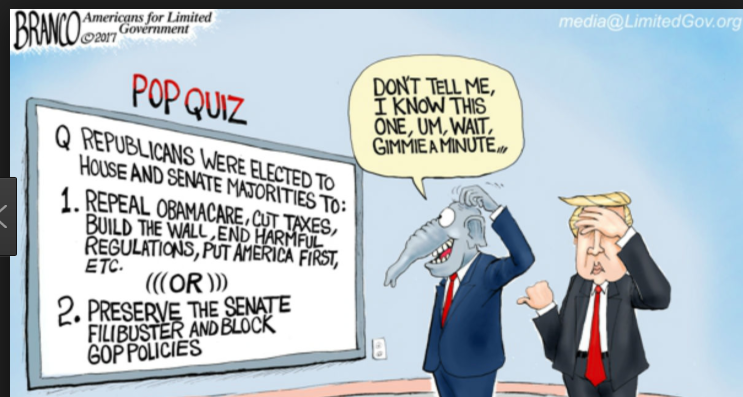 Conservatives all over social media are concerned that perhaps people like Mitch McConnell, Lindsey Graham, Paul Ryan, and the usual pack of Democrat-leaning Republicans simply don’t want President Trump to lead any victories–big or small–during his tenure. Forget the Leftists going after President Trump–what could be more diabolical than for members of his own own party to purposely cause chaos in the White House, and to block any/all successes, large or small?  Because that’s certainly what seems to be happening.

After all, Donald Trump is the ultimate “outsider”, perhaps the cause of extreme resentment for these very unpopular career politicians, and a constant reminder that we–and not they–are their bosses.

“The mainstream media hates President Trump. So do Democrats and establishment Republicans also known as Republicans in Name Only (RINO).

They want to bring down this presidency — and will do and say anything to overthrow this duly elected leader. Anything.”

On Facebook, Dan Bongino didn’t mince his words: “If Obamacare repeal doesn’t happen then the curtain will be pulled back and ‘the wizard’ will be exposed. And, by ‘the wizard,’ I mean full of sh%# politicians.”

Since you failed to do what you promised the American people you would do, “Repeal Obama Care” it’s time for you to step down as leader!!

GOP has control of EVERYTHING and you still can’t get anything done. This is on you, not Dems. Fix it or step aside for someone that will.

So what are you going to do about this? Can we recall you from office? I’m sick of your betrayal to US, the voters! And I did vote for you!

Frankly few scenarios other than “purposeful failure” offer a better explanation as to why, after 7 years of complaining about Obamacare and holding majority over the highest offices in America, they have no solid plans to repeal and replace Obamacare.

And a “solid plan” means not merely trying to “fix” such an unfixable, faulty product but instead throwing out the bad and offering a better, more viable solution for America’s healthcare needs.

Many Senate Republicans are feeling the same concerns, with their current ire directed at McConnell.

Hopefully the President and the ‘good guys’ in Congress will continue fighting to rid our country of the monstrosity that was incorrectly titled the “Affordable Care Act”.

Tensions are bubbling over between President Trump and Senate Republicans.

“He was of no help,” grumbled one GOP senator, who doubted that Trump would have done much to defend lawmakers from political attacks if the bill passed.

A member of Trump’s team says their boss bears no responsibility for the embarrassing loss because McConnell was in charge of putting together a Senate package.

“This was McConnell’s deal,” said a White House official when asked what went wrong.

After McConnell conceded Monday night that he did not have enough votes to pass the Senate version of the healthcare bill, he suffered another defeat Tuesday when GOP colleagues quickly smacked down his backup plan: pass the ObamaCare repeal-only bill that cleared the Senate and House in 2015.

But a senior Senate Republican aide bristled at the notion that McConnell fumbled the ball.

“Repeal-only is what Leader McConnell wanted to do in January. The president wanted to do repeal and replace,” the aide said.

McConnell told reporters in January that the GOP healthcare bill would closely resemble the repeal-only bill, which the Republican-controlled Senate and House passed two years ago but then-President Obama vetoed.

At the time, McConnell and other GOP leaders were debating whether to set up a two- or three-year transition period to give themselves time to come up with replacement legislation.

Trump, however, put pressure on Congress to keep ObamaCare’s most popular provisions: protections for people with pre-existing medical conditions and the ability of young adults to stay on their parents’ health insurance until age 26.

He was backed up by centrists such as Sen. Susan Collins (R-Maine), who said it would be better to have a detailed plan for replacing the law before repealing it.

“As I have always said, let ObamaCare fail and then come together and do a great healthcare plan. Stay tuned!” the president tweeted Tuesday.

“He’s the president of the United States. These people are folks who are looking to him to help them,” said a second Republican senator who requested anonymity to discuss Trump’s stance frankly.

The Three Words Liberals Love to Throw Around Most