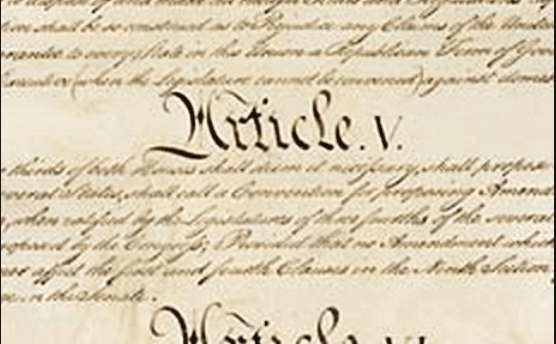 I’ll admit, I was a “Johnny-come-lately” to the political scene having awakened from my pre-occupied slumber around the time the Tea Party activities began to perk up through the mud. I enthusiastically attended the big rally in Washington where I first laid eyes on then Congressman Mike Pence who was one of the featured speakers on the Capitol lawn. Always respected that guy.

From that time on, I have constantly heard the complaints and gripes from my fellow conservatives about the inactivity toward reforming the problems in the federal government relating to budgets, deficits, spending too much, states’ rights, over-reach, etc., etc…ad nauseum.

So, what’s stopping Congress from making meaningful change? Vested self-interest. The K Street gang has always held sway among the ruling elites simply because they are holding the key to re-election – Money! You know the old saying…if you want to know what’s going on and who the winners will be, follow the money.

And if we follow the money we immediately understand why 1) 95+% of incumbent Congressmen and Senators get re-elected time and time again, and 2) Congress will never change the system in any way that interferes with #1.

Ok, then. If, as an American, we want to see our Constitutional Republic survive, what should we do? It is obvious to anyone even slightly versed in Macro-Economics that we are headed for a serious bump in the road – sort of like driving off the edge of the Grand Canyon. The current situation cannot continue.

Thankfully, our founding fathers nearly thought of everything. Their experience with King George was enough to make them very cautious when trying to develop a huge government to oversee the original colonies that had their own unique lifestyles and characteristics that made them diverse (to use a modern term de jour).

Tucked away in the latter parts of our Constitution, in Article V, the methods available to amend our Constitution are described. Many I have met do not see the simplicity and beauty of their provision.

Yes, Congress has been the originator of all the past amendments to our Constitution, but they are not the only ones allowed to do so. Article V describes another method that has never been used but provides the key to our current problems.

This alternative is for the states (minimum of 34 required) to petition Congress to convene a “Convention of States” (COS).   Once convened, the delegates to this convention (selected by method determined by each state – usually either by choice of the state legislatures or by a statewide convention) come together and determine the nature and extent of each amendment. Once the amendments are voted on and approved by the delegates, they are submitted to the state legislatures of all 50 states and must be approved by 38 of them.

At that point, the amendments become a part of the Constitution without one bit of help or hindrance from Congress or the President.

There are many conveniently misstated “facts” about this process that have become speedbumps in getting the approval of the necessary 34 states. Currently, 12 have completely approved their resolutions requesting a convention, with quite a few still considering their decisions. Some of the “misinformation” include:

“A Constitutional Convention could become a “runaway” convention whereby the entire constitution could be hi-jacked or morphed into something terrible.”

This is blatantly false on its face as the convention can only produce recommendations that must still go through the identical process for approving the actual amendment that it would if Congress had created it.

“It would be an expensive and slow, tedious process that would create divisions between states and simply make matters worse.”

Yes, the expense of such a convention could be considerable and it will likely take some time to get through the suggested amendments and agree on the precise wording, but the alternative – the status quo – is becoming exceedingly expensive as manifested by the $20 Trillion-dollar debt we have racked up under the current situation. So, with regard to this one, I can only say, what have we got to lose?

“Congress would interfere with it or outright refuse to convene such a convention.”

Congress can attempt to interfere, but given its low approval ratings, if such a convention were to be proposed by the required number of states, Congress would face an overwhelming backlash from frustrated citizens who will not take kindly to any hindrance from them. A refusal to convene such a convention when 34 or more states request one would be immediately declared unlawful by the appropriate court since convening the convention is mandatory – required – not a choice!

Some of the suggested amendments include but are not limited to:

Term Limits for both houses of Congress and the Supreme Court.

Repeal of the 17th Amendment (the Senate was, after all, intended to protect the states from federal over-reach. The House was intended to represent the people.)

Several others concerning taxation and reducing the size of government in a meaningful way.

The coordinating group supporting the effort to obtain the necessary approval of resolutions from the individual states needs as much help as they can get. You can learn more by going to their web site .

Our founders provided this safety valve for just such a time as this. It seems to me that it would be a terrible waste to let the opportunity slip by without using it. Get involved!