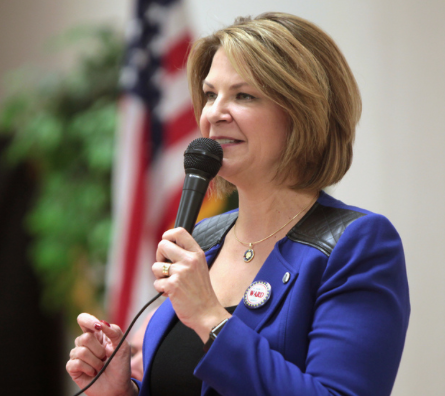 It is becoming clear that the Washington establishment is afraid of Kelli Ward as she makes her second run for Senate, this time to unseat Jeff Flake to represent the state of Arizona.

Recent polls commissioned by the Kelli Ward for Senate campaign show Dr. Ward ahead in the polls by a margin of 48-31 among likely GOP voters. Ward has been very active traveling around the state of Arizona, speaking face to face with voters. Her campaign is in full swing, increasing her name awareness in the state and recently found herself speaking with the Trump Administration regarding her campaign.

When matched against two other Arizona politicians considering a run for Flake’s seat, State Treasurer Jeff DeWit and former state party chair Robert Graham, both of whom also recently spoke to the Trump White House, Ward leads in a four-way race with 30 percent of polled voters.

However, since the recent announcement of Senator John McCain’s cancer diagnosis, Ward found herself in the middle of tough questioning from the press regarding the future of McCain’s Senate seat.

The fact is, if McCain’s seat opens prior to the end of his term, Arizona governor Doug Ducey would appoint another Republican to fill the seat until the next general election in 2018. The winner of the seat in 2018 would then complete Senator McCain’s term. Arizona will potentially be in the unique position of having two Senate seats open in the 2018 election.

So in a recent radio interview with Fort Wayne, Indiana’s WOWO, Ward was asked specifically if her name might be considered if Senator McCain resigns. Her response was, “I certainly hope so.”

Frankly it would have been more than a political misstep if an active, viable candidate would have responded in any other way. Ward added that her opponent, Jeff Flake, might even support the idea of Gov. Ducey appointing her to McCain’s seat, moving her out of his re-election path.

As a doctor, Kelli Ward commented in her interview how she would advise patients and their families at a time such as this. Her medical explanations of glioblastoma tumors were based on her clinical knowledge of the disease along with an expression of her Christian faith, adding that “miracles do happen.”

That was the ‘doctor’ side of Ward answering the media’s question. At the same time, Kelli Ward “the politician” also reminded listeners, “With John McCain out of commission, we don’t have 51 votes on the Republican side.”

This is as true as her response about tumors. Facts cannot be overlooked, even in such sensitive times as a cancer diagnosis.

Almost immediately, Ward’s radio interview was blown out of proportion.

Local news outlets and other politicians did their best to turn Dr. Ward into a cold and calculated villain, claiming Ward was suggesting McCain will “die in office” and “should quit” so she can fill his seat now. Her political opponent, Jeff Flake, blasted her as any political opponent would by saying he was “dumbstruck” by Ward’s comments. Flake said he supported McCain, calling him “a fighter and an American hero” adding “I fully expect to see him back in the Senate soon.”  Senator Joe Manchin (D-W.Va) piled on by tweeting, “In all ways I measure good Senate colleagues (honor, class, integrity) Kelli Ward falls short. Ppl like her aren’t welcome in the US Sen”.

Of course all of McCain’s fellow Senators can offer their heartfelt, sincere wishes, but there still remains the reality of his seat becoming open in the near future.

Senator McCain’s service to our country and his years as a prisoner of war should never be disregarded or minimized. And yet in any other business setting–and politics is a business–if a tragic diagnosis were made on a high ranking employee, the same question would be floated throughout the company. While families need to make choices and deal with the shock of news such as this, the wheels of business and the future of those in the work environment need to be considered. The lack of decisiveness on next steps is not good for anyone’s future.

It’s obvious Kelli Ward makes the Washington establishment nervous. The Republican Party has never been good at looking at the big picture, and in this case they are refusing to see past the immediate news of a serious diagnosis of their colleague.  But the nation is also in great need and cannot survive without all seats of leadership duly filled with serious minded representation.

Bottom line, Kelli Ward is being vilified for answering truthfully about a very difficult subject. The ensuing maligning responses from her opponent Flake and others only further reveals the “good ‘ol boy” network of the Senate and confirms the true need to change the current Washington establishment.

Socialized Medicine: Allowing the Government to Decide Your Fate