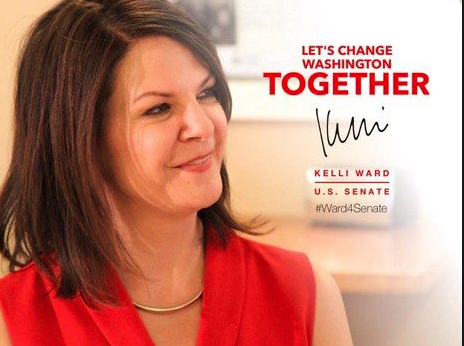 Recently, I took the time to speak with Dr. Kelli Ward, who is running against sitting U.S. Senator Jeff Flake (R-AZ) in the2018 Arizona GOP primary. I asked her about the issues that mattered the most, and the reason she is running for office again.

JK: I understand that you are looking to challenge sitting Sen. Flake (R-AZ) in the 2018 primary; but he has a 97% rating from the ACU. How do you think you can serve Arizonans and the nation better than Sen. Flake

Kelli Ward: Well, I’ll tell you, first and foremost, I am challenging Senator Flake – where did you get the 97 from the ACU, because that’s actually his average when he was in the House!

Kelli Ward: Now, if you look at his Senate record, from ’13 to 16; his average was 80; in 2013, he was a 71. Huh. That was the first year he was in the Senate. A 71. He had one good year, 92, but Senator McCain had a good year that year, too – it had something to do with having a conservative challenger in Arizona on his tail in 2014, coming into the 2016 election. In 2015, Flake was at 79; 2016, he was at 79. When I was in the Arizona legislature, I was voted the most conservative legislator. Myself as well as Governor Ducey have done a great job at making Arizona a business friendly state so that when these things at the national level are put into place, we are set to skyrocket here in our state. I love the great state of Arizona!

JK: What is the most pressing issue that Americans are facing today, and what will be your flagship issue if Arizonans elect you to the Senate?

Kelli Ward: The lack of border security; effects of illegal immigration to health care, to public safety, to corrections – our culture, our values, our republic are really under assault – with very little accountability. That is the number 1 issue – economic growth. I love President Trump’s plan 4-6% growth promise; making America great again starts with tax reform. I hope the Democrats, Republicans and the Never trumpers can get off their distractions and allow the work that needs to be done. Health care is near and dear to me; I am not happy with what we have so far. I worry that the Senate is going to make it worse than it is right now; we need a full repeal of AHCA. Also, making sure our military is the strongest in the world; my husband will retire after 33 years of service with the Arizona Air National Guard. We need to be strong, able to fight when needed; able to achieve peace and strength, and to honor the promise made to them. These are the top, pressing issues

JK: Can you share with us your thoughts on President Trump, and how you’d rate his performance so far in the Oval Office?

Kelli Ward: : I give him an A because I’m looking at the policy; the legislation he’s already signed into law; the Executive Orders he has put into place. I am not looking at the acting issues that the media wants us to focus on. When you look at performance, he gets an A.When it comes to pro-choice and religious freedom; school choice to achieve success; working diplomatically with many countries around the world. I think he’s doing a really good job; he really is a political novice. We didn’t elect a career politician. We elected a businessman because we want the country to get back on track. We tend to deliver on the campaign promises that he made on the trail with respect to immigration, repealing ObamaCare….I’m really looking forward to the next 1000.

JK: What issue do you think he needs to focus on going past his first 100 days?

Kelli Ward: The hot button issue needed is tax reform; the 15% corporate tax cut needs to get in place

JK: How about a fun question: wine, champagne or sparkling water?

Kelli Ward: Depends on the time of the day; I love sparkling water, I have a SodaStream, which is controversial because of being made in Israel; it’s great to make some sparkling fizzy water. I like a good glass of wine sometimes. Generally, I like Justin Winery in Paso Robles

Kelli Ward: I have an extra battery for my phone; purple Energel Pens; business cards; Ward for Senate pens; pocket Constitution; credit cards and ID; and Lipsense, because it stays on!

I hope people will keep in touch with me. I’m very accessible on social media; we need a government for, of, by the people. I’ve been watching the political gamesmanship this week – appalling to see the insider establishment types who care more about their re-election; making economy strong; all of those things, it’s really been very frustrating to watch. It’s the reason we need to drain the swamp.